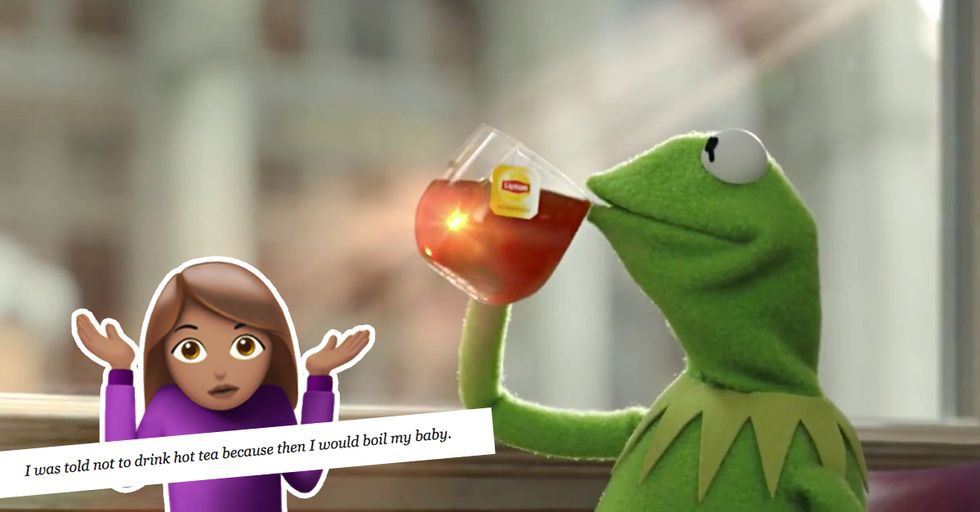 Weird Pregnancy Lies Your In-Laws Are Certainly Telling You

I'm not pregnant, and I never will be (since I'm a guy). But, I do recognize bad parenting and pregnancy advice when I see it; like all of the horrible advice in this article. We have a roundup of the 30 worst, weirdest, and just flat out wrong pregnancy advice people have received. Please, do not take any of this advice. Just talk to a real doctor, not an internet one.

Maybe you've already had kids, and all of this sounds like a walk in the park. Hit us up in the comments and let us know what the worst pregnancy advice you've ever gotten is. We'd love to hear all about it because I'm sure it's crazy.

Thanks to the wonderful world of Reddit, we'd like to present our candidates for the absolutely worst pregnancy advice ever given. Enjoy.

Starting us off with a real winner.

I was told not to drink hot tea because then I would boil my baby. -sawcy_cat_

No, not THAT kind of drinking!

To not drink water because it causes nausea. -melbell518

Not to sit on stairs because it will cause you to have a miscarriage... people are crazy. -PrincessShelbyy

This one is disgusting.

The lady at the counter in the village bakery told me that I should smear my face with SEMEN to counter pregnancy acne. It was the first time I’d ever met her. -WrongedCorinna

Drinking alcohol is good for you?

While pregnant with me, my mom was told that drinking beer would help her baby develop and be nice and chubby. I was five weeks early and barely six pounds. -SoldMySoulForHairDye

This is some seriously wacky advice.

Don’t raise your arms above your head, it will tangle the baby’s cord and the baby will die. -queenoreo

My friend's dad was a chiropractor. She told him I had a miscarriage. He told me, "No wonder. You will lose every pregnancy with a pelvis like that." Freaked me out SO MUCH and I guess I ruined the party by crying and leaving, and my friend was mad at me. I have back trouble, yes, but I have three children living. -NorthernWhiteRhino

When I was pregnant past my due date a co-worker advised me to drink cod liver oil mixed with vodka. Apparently, this mixture would upset my digestive system, give me horrible diarrhea and thus trigger labor contractions. I did not drink this combo to help with being overdue. I ended up several days later being medically induced and labor/delivery was swift and baby healthy. He is a grown man now. -hydrawoman

Seriously, what is with the alcohol advice?

My MIL said it's ok to drink mixed drinks... she went on to say that my husband was a margarita baby. I now call him that when he gets on my nerves. -blackcanary0127

"Excuse me, what are you doing with those things?"

My entire family was super judgmental/against breastfeeding for some reason, it was really strange. "How long are you going to do THAT for?" -agitatedlending

“Don’t worry about the swelling and high blood pressure, that's normal." -my midwife days before being induced due to preeclampsia. -pizza_witch

Time to read up!

My very first OB visit (first baby) handed me a book about month by month pregnancy and said that if I had any questions to just refer to the book. Then I said well what if the baby...she cut me off right there and pointed to the book and said, “ah, ah, ah, it’s in the book." I changed OBs. -realelizathornberry1

This one is just mean.

My sister had to have an emergency c section when she had her daughter. Her mother in law said she wouldn’t be a “real woman" unless she had a vaginal birth. -madisjamz

And this one is also rage inducing.

I was 18 when I had my son and was already terrified. Had to be induced and ended up having to have a c section because labor just wasn’t progressing and his heart rate kept dropping. For the first year and a half of my son's life, my mother told me I wasn’t a “real" mom because I had to have a c section. -iwantmypizzaback

One of those conversations that never should have happened.

When I found out I was pregnant a nurse friend of mine felt the need to rattle off an endless list of stuff that could potentially be wrong with my baby. Another friend of mine, when I started telling people I was pregnant after the three months and was accused of telling people too early, said, "It doesn't matter when you tell people, you could have a miscarriage at any point during your pregnancy." They both meant well, but really guys shut up! -Vixenstein

I announced my pregnancy after three months. A friend of mine told me it was too early and “what happens if you miscarry?" I told her I miscarried before and if it happens then it happens, I’d just have to tell everyone. She said it would sound like I was backtracking... uh okay lol. She said if it were up to her, she wouldn’t tell anyone at all until she had the baby. She got pregnant shortly after and sadly miscarried at 11 weeks, at which point she decided to publicly announce her pregnancy and miscarriage. I was sad for her but I found it hypocritical. -xoxosayounara

When I found out I was pregnant a 4th time (3 losses in a row) I heard so many from strangers mine isn’t necessarily advice but more open mouth insert foot “Are you SURE this one is going to work?" I was also told if I was on my cell phone or around my modem/router it would cause brain damage to my unborn child. She’s 4, perfectly healthy, no brain damage and let’s just say it took a lot of medical attention to get her to full term. -coffeeandjesus1986

This person was told to use some (ahem), toys.

I was told to use really big sex toys to "stretch the coochie out". -nutterysquirrel

Classic Wiccan advice from a Mother-in-Law.

My MIL: don't eat spicy foods or stand under the moon... ugh. -MamaDMZ

This grandma is the grandma that I need.

I was about 8 months pregnant, I said something at family dinner one Sunday about how I was scared of labor, my gram shouts out “ you know you should smoke a blunt". Now, my family’s open about their pot use, most of my family will smoke from time to time but my grandmother has never smoked in her life so I was a bit confused. I just looked at her and keeps going “ if you smoke blunts while you're in labor it will keep you calm and help with the pain, I’ll find you some weed just smoke in the bathroom of the hospital..... but wear socks you have ugly feet and the doctor won’t want to help you if he sees your cracked heels." My grandmother is something. I didn’t take my grandmothers advice, and the doctor delivered my baby even with my cracked heels and once I had the baby and could reach my feet again I made sure they weren’t cracked anymore. -milfandcookies4santa

"I'm supposed to put what in my bra?"

Frozen cabbage leaves in the bra to help with swelling and pain due to breastfeeding. While it felt awesome for the whole minute or so they stayed frozen, they eventually turn to mush and make a mess. -CheeseVampire

Make sure you're nice and presentable for the baby!

Oh! I was told that I need to shave down there or the baby will get carpet burn. Like... Wut? -fallingkites88

Baths are a no-no.

Taking a bath can cause a miscarriage. To be fair, it was from my husband's (incredibly sweet) grandmother, who meant well. She was 92 years old at the time and hadn't been pregnant in a very, very long time! She also had a good number of miscarriages (my father in law and his sister are 15 years apart in age), so I think she was coming from a different place than most. -lenachristina

You are eating for two. Um, no. You only need about an extra 100-300 calories during pregnancy. Are there going to be intense cravings and times where you indulge with those brownies or chips? Sure. Just don't go overboard and use pregnancy as an excuse to eat an entire batch of brownies in one sitting. -U_smell_like_goat

Make sure you get plenty of fluids.

When I was pregnant with my son, his dad's family tried to make me get rid of my cat. They said that the cat would crawl on top of the baby's face and suffocate him because he smelled like milk. One of his relatives actually went as far to say I was a bad mom if I didn't get rid of the cat. Son is 3 years old now and the cat has never given two shits about him. -auntbubble

This one just leads to disappointment.

I was told that heartburn during the pregnancy meant that the child had a lot of head hair. Had a ton of heartburn. The kid barely had hair. -Zombiebloomers

Peanut butter is super dangerous. But not for that reason.

I had a co-worker tell me that eating peanut butter (I was eating an apple with peanut butter on my lunch break) would give my baby cancer. I already thought she was the world's greatest idiot so that nugget of wisdom was just confirmation. -MyWaffleDoesNotJudge

Get your shots, folks!

Currently pregnant, and currently dealing with my mother who became an anti-vaxxer 13 years ago. I had no idea, just found out recently when I mentioned I got my tdap and flu shot and I asked if everyone in the family was caught up because the baby is due next month and flu season is right around the corner. She called me an idiot for putting "rotting DNA" in my body while pregnant. She refuses to get a flu shot, so I refuse to let her see her first grandchild. Not taking chances with my kid's life because you can't be bothered to do legitimate research or listen to me when I try and explain it to her. -Onearmssss

And finally, this little bit of fortune telling.

So not really about pregnancy advice, but someone told me to put baking soda in a cup and piss on it first thing in the morning. If it fizzed, I was pregnant with a boy. If it did not fizz, I was having a girl. -introvertalert