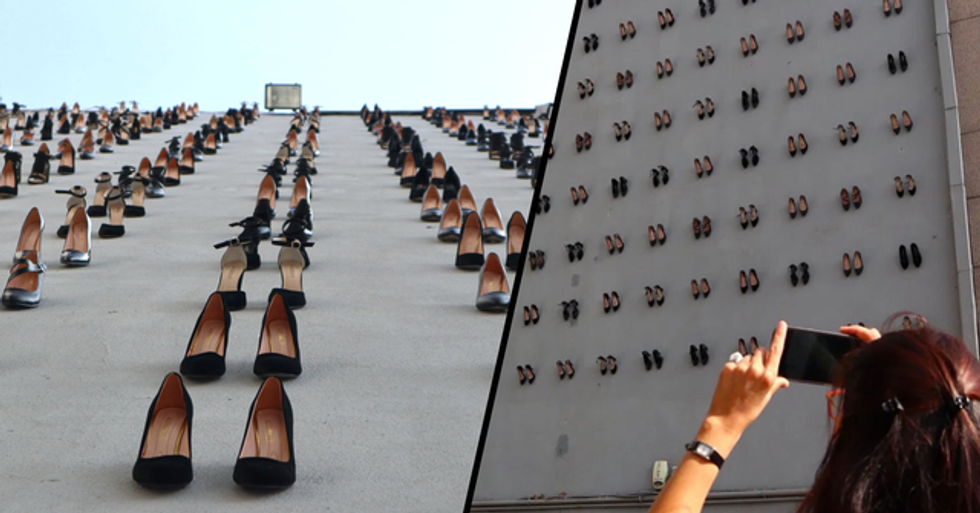 A Turkish artist has gone viral this week after his poignant display of art speaks out for all the Turkish women killed by domestic violence.

The country has long had an issue with violence against women, and a disgustingly high number of women are murdered in their own homes every year. And, remarkably, nothing has been done about it, with many of these killers going on to walk free from their crimes.

But now, an art installation has been erected in an attempt to raise awareness to the issue and to remember the hundreds of lives lost. Following an old Turkish tradition, 440 pairs of women's shoes have been hung on the wall of a large building to commemorate the 440 lives lost this year alone.

Keep scrolling to see the moving artwork, and to hear the heartbreaking story behind it.

Turkey is a beautiful country.

With its stunning landscapes and rich, historic culture, Turkey has long been a popular vacation destination.

However, despite its popularity with tourists...

As a result of domestic violence, 477 women were killed in Turkey last year alone.

And a report prepared by the Umut Hope Foundation stated that, of this number, 120 were killed with guns, eighty-nine with rifles, 132 with sharp objects, while the remaining 136 were either choked or beaten to death.

Sadly, this isn't a new problem for the country.

Femicide — killing women because of their gender — has been a longstanding issue in Turkey. Nearly 300 women have been killed so far this year, according to the Istanbul-based advocacy group We Will Stop Femicide, which has been tracking gender-related deaths since Turkish authorities stopped doing so in 2009.

The group is an authoritative source of violence against women.

And it compiles its data from news stories and emails from the families of women killed. It claims that more than 2,600 women have been murdered since 2010, most of them by their partners or other male relatives.

Yet despite these disgusting statistics...

Nothing seems to be changing. In 2011, Turkey became the first country to sign and ratify a Council of Europe convention on preventing domestic violence. However, We Will Stop Femicide's data shows a steady increase every year in the number of killings, with 121 women murdered in 2011 and nearly 4 times that number, 440, in 2018.

Femicide crimes are being covered up.

“The forms of violence against women are changing. Shady deaths and femicides by unknown assailants are on the rise. Many incidents are being covered up. When [femicide] cases are identified as ‘suicide,’ it becomes exemplary for similar incidents," Fidan Ataselim, secretary-general of the platform, has told local media.

Women are continuously living in danger.

The We Will Stop Femicide platform explained: "Women, from all regions and social segments of Turkey, want to work, have access to education, get a divorce or break up with their partners if they are not happy, not to be forced to do things they do not want to and make their own decisions about their lives."

Not enough has been done to stop the dangerous epidemic spreading across Turkey.

They continued: "Rather than acknowledging this social reality and understanding women, men are responding to women’s quest for rights with violence and putting obstacles in their way. The lack of efficient policies that secure equal existence and rights of women is also encouraging men who are prone to violence."

And, now, a recent art installation in Istanbul has drawn attention to the issue.

Created by local artist, Vahit Tuna, 440 pairs of black shoes have been displayed as a means of representing the 440 women who died at the hands of domestic violence throughout the year.

He is playing on an old Turkish tradition.

In some parts of Turkey, it is customary to hang a pair of shoes on the wall outside a home to remember the recently deceased.

The shoes are displayed across 2 art installation walls...

440 pairs of women's shoes were hung on one of the city walls in #Istanbul this week to draw attention to male dome… https://t.co/DlR0pCV5QQ
— 𝕊𝕦𝕔𝕙𝕚 𝕊𝕠𝕦𝕟𝕕𝕝𝕠𝕧𝕖𝕣 (@𝕊𝕦𝕔𝕙𝕚 𝕊𝕠𝕦𝕟𝕕𝕝𝕠𝕧𝕖𝕣)1569245067.0

Which are part of Yanköşe, a non-profit art platform in Istanbul’s Kabataş neighborhood in the Beyoğlu district. The Yanköşe website explains that its walls "open a space for expression to artists who produce unexpected, experimental, contemporary art."

The installments are visible to all members of the public.

Tuna opted to fix the shoes to the wall rather than displaying his work inside in an effort to catch the attention of passersby as well as art enthusiasts.

Tuna spoke about the Yanköşe project and his installation.

He told local media, "Here is Yanköşe project. One artist each year uses these two walls to exhibit their artworks. And this time, I wanted to exhibit work here. There are 440 pairs of shoes here. These 440 women's shoes are equal to the number of women killed in 2018 in Turkey."

The shoes stand as a powerful reminder of Turkey's domestic violence issue.

“What this project does is that it both raises awareness regarding women murders and also materializes this issue like a sculpture or monument. This work will stay here for 6 months," he continued.

People have been moved by the project.

And many noted the likeness of the project to the Holocaust memorial, where thousands of pairs of shoes stolen from the Jewish victims have been displayed.

The artist has been praised for his work.

And for preserving these women's memories in a beautiful, yet dignified manner.

Many marveled at the compelling display of art.

Though the disgust about the growing violence against women is still prominent.

The Turkish government needs to step up.

How many more women need to be killed in their own homes before change finally happens?

Let's hope the women of Turkey will soon get the justice they deserve.