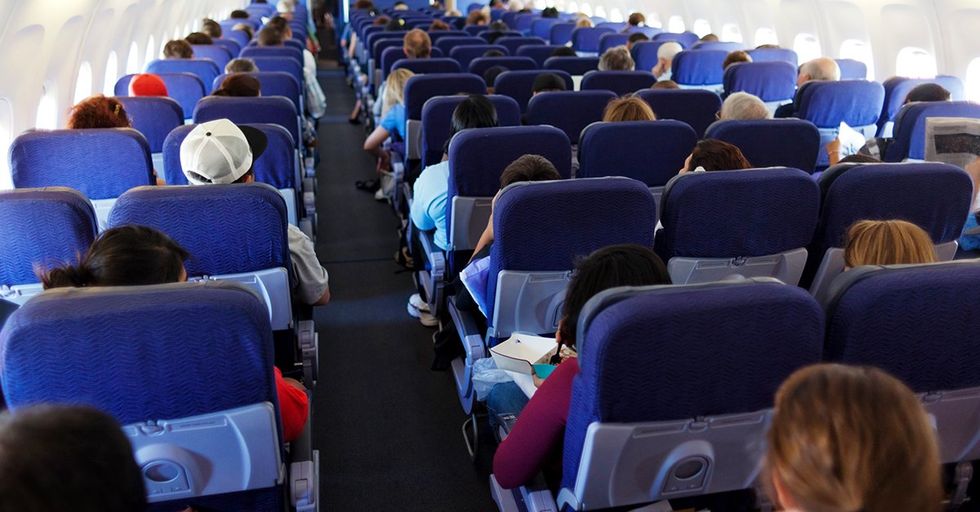 A woman boards the airplane for her flight, she sits down...and ends up harassed by the man sitting near her. It's a dishearteningly common story. For those who haven't seen anything like this before, you might be surprised by how "normal" this kind of behavior is.

And that's the subject of one woman's viral Twitter thread. Reporter Joanna Chiu sat in front of a teenage girl and a grown man on a recent flight. After witnessing the man harass this teenage girl, Chiu spoke up about the experience. Furthermore, the rest of Twitter is responding (and relating) hardcore to Joanna's words.

So get the full story on what went down on the flight. Chiu demonstrates exactly how people should be looking out for each other in those situations. It's a great thing that she was present...and that she has a platform to educate on such things afterward!

It can happen to anyone, but there's no denying that women overwhelmingly find themselves the victims of sexual harassment from male perpetrators.

Not only can it happen to anyone; it can also happen anywhere.

And in this instance, we're talking about sexual harassment happening 35,000 feet up, during a commercial airplane flight.

Which is especially uncomfortable.

Because if something like that starts happening, there's really nowhere to go. It's up to you and the people around you to ensure that you're safe.

Luckily, reporter Joanna Chiu is a great ally to have in such situations.

Thread about airplane creeps: I’m on a plane from a late-evening stopover from and was very tired and had a row to… https://t.co/OJsdWLnsse
— Joanna Chiu (@Joanna Chiu)1553498585.0

So let's dive in: Chiu was all settled in to her recent flight, but something began to happen in the row behind her.

A man appearing in his late thirties was obviously delighted to be seated next to a teenager separated from the res… https://t.co/6PRPnJzqRP
— Joanna Chiu (@Joanna Chiu)1553498586.0

Because what's so funny about a woman wanting to be a CEO? Oh, right. Nothing.

The girl was doing her best with all the attention.

She was friendly and he seemed to take that as a welcome cue to get very familiar and started teasing her and kept… https://t.co/i2Waq04Jes
— Joanna Chiu (@Joanna Chiu)1553498587.0

Now, I can't actually say what she was thinking at this point, but even when women are uncomfortable with attention like this the common default is to try and be polite (until we can't anymore).

Which is what happened.

It did, and as soon as he asked for a “dirty” photo while leaning close to her I turned around and rage-whispered e… https://t.co/UNMhUfDJGY
— Joanna Chiu (@Joanna Chiu)1553498587.0

And once things got truly out of hand, Joanna stepped in.

Turns out, Joanna wasn't the only woman looking out for this girl.

Another woman seated behind him was listening and monitoring too and while the man was gone she let the teen know t… https://t.co/xmrtwnYLM1
— Joanna Chiu (@Joanna Chiu)1553498588.0

This is the kind of awareness and solidarity we need if we're going to keep fighting this kind of harassment.

Then, the man was asked to move.

They checked other witness accounts and the head of the flight service (a woman) asked the man to move. He resisted… https://t.co/Ekdko3dhlg
— Joanna Chiu (@Joanna Chiu)1553498588.0

But of course, that was easier said than done. A common trait with harassers like this is belligerence, especially towards other women.

He moved. The attendants checked in with the young woman and wrote up a report. They handled the situation well as… https://t.co/A0gWdq7ApK
— Joanna Chiu (@Joanna Chiu)1553498591.0

So the girl was okay in the end, if (more than likely) uncomfortable and shaken. It's important for the people in charge to handle things well!

But none of the male passengers seemed to show they noticed what was going on. Maybe fellow women are more likely t… https://t.co/j0rpEt1aDx
— Joanna Chiu (@Joanna Chiu)1553498591.0

And she asks a good question. Was it really so hard for other passengers to notice what was happening?

Joanna recalled her own experiences with sexual harassment.

It's disturbing what innocent, innocuous things men like that will use to justify a woman's "interest" in them.

That wasn't Joanna's only experience, either.

The second time I traveled alone an older man struck up a convo while we waited for boarding and he asked about man… https://t.co/Y8DwfdeenO
— Joanna Chiu (@Joanna Chiu)1553498592.0

And this time, sexual harassment turned into a sexual assault.

This is why adults need to be vigilant.

All adults need to be on guard and know there are things we can do to intervene even when a crime hadn’t technicall… https://t.co/Rp2zVvh1Qu
— Joanna Chiu (@Joanna Chiu)1553498593.0

Harassment isn't just insults and slurs. Assault isn't just throwing punches. Adults need to know what these things look like in all their forms, and how to intervene.

It’s so disturbing there are predatory people out there who act like they have no idea what they’re doing is wrong.… https://t.co/jPfML3NA99
— Joanna Chiu (@Joanna Chiu)1553498594.0

And it's a valid concern. A guy like that really should be monitored in the future, since he clearly didn't know how to conduct himself appropriately. But who knows if that will happen?

At the very least, the man got a stern talking-to.

Just walked off the plane and security was ready to pull him aside to talk to him and he looked like he was sweating bullets.
— Joanna Chiu (@Joanna Chiu)1553499807.0

Good. At least he had the sense to know he was in trouble for his behavior!

Chiu even got a thank-you note.

I don’t want to say name of airline because journalists have to be careful not to make endorsements but just want to say that this Canadian airline crew handled the situation so well. Workplaces, schools, sports teams etc. can take note. They even gave me and other woman a card. -Joanna Chiu

Here's what the note said:

Chiu isn't done with the harasser, however.

Again, good. Hopefully, his employer follows up with disciplinary action.

Chiu sent her best to the young passenger she helped.

I’m sure the young woman he targeted will be CEO someday or some other position of influence. She was in the middle… https://t.co/OUzwxSJ0XN
— Joanna Chiu (@Joanna Chiu)1553503829.0

And offered another source of insight for those who don't know enough about this kind of harassment--because it's a very real problem!

Other women replied to Chiu's thread.

Unsurprisingly, many of them had encounters of their own to relay about harassment while traveling via airplane.

This is a good thread. I've had similar experiences, which are especially uncomfortable when you're in the window s… https://t.co/cJlui9tbVX
— Laura Payton (@Laura Payton)1553521412.0

Honestly, this is why aisle seats are so much more comfortable for some of us. Window seats may offer a cool view of the clouds, but at least in the aisle seat you're not blocked in.

Parents also felt strongly about this.

Especially parents who have been in both positions: the person being harassed, and the person who stepped in to prevent it.

There's a common theme with all these replies.

Namely, the knowledge that harassment like this happens all the time. Hopefully, after this thread, more people are aware of it too.

And thus, the thread went viral.

Wow this took off overnight. Can we share some resources on how to intervene safely in public spaces?
— Joanna Chiu (@Joanna Chiu)1553530435.0

So Chiu went back and shared some more guidelines for people who are unsure of how to intervene when they see someone being harassed.

Apparently, actual sexual harassment training (i.e. telling people not to) doesn't always work. But teaching people how to put a stop to it is more effective.

List of examples and tips on how to intervene (can be subtle like interrupting and asking for the time or just movi… https://t.co/VsRYPO5C8i
— Joanna Chiu (@Joanna Chiu)1553530938.0

If you've never been given pointers like this, then definitely look these over! You never know when they might be needed.

Here is another great guide on what bystanders can do about harassment on public transportation by @EndingViolence… https://t.co/db9E4HYuw1
— Joanna Chiu (@Joanna Chiu)1553544444.0

This one is written up by the Batter Women's Support Services--so it's a great resource to use!

Chiu's thread took off so much, she wrote an op-ed about it.

How my tweets about harassment on a plane sparked a conversation about what bystanders can do to help. I wrote an o… https://t.co/LVT3BneFSE
— Joanna Chiu (@Joanna Chiu)1553550010.0

And she's right! Using social media as a platform to talk about these issues is one huge way it's so useful!

And there were some promising responses from men who saw the thread, too.

Hundreds of men have also shared the Twitter thread and many said that they weren’t aware that airplane harassment… https://t.co/eracpk24Ln
— Joanna Chiu (@Joanna Chiu)1553550255.0

Chiu likely had the right idea when she suggested that many men don't see this because they didn't grow up having to look out for it themselves. But with conversations like this, hopefully, those men will be able to intervene with just as much certainty as Chiu and other women who have experienced harassment firsthand! Share this story and continue the incredibly important conversation that has come from it!