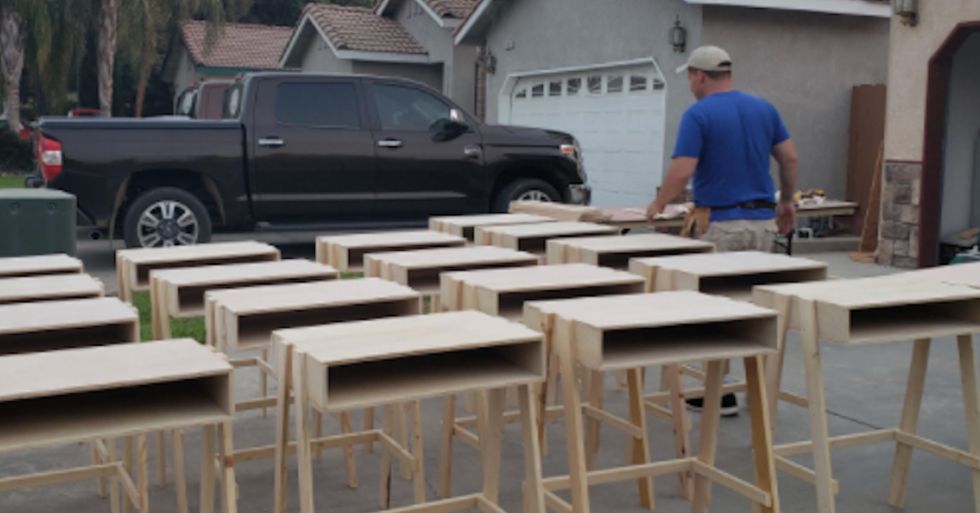 A kind-hearted woodworker has made thirty-five homemade desks for local children who are having to learn from home during the pandemic... and he hasn't charged them a dime, either!

It's looking likely that schools will never be the same again...

And that's all thanks to the global pandemic.

In March, millions of children were sent home from school...

And little did they know that they wouldn't return properly until 6 months later in September.

Times haven't been this hard in decades...

And so many children went without their vital education for several months due to the rapid spread of the coronavirus that took hundreds of thousands of lives.

But now the new term is here...

Many parts of the world have allowed their children to return to the classroom... with some new safety measures, of course!

But times are still worrying...

And parents have been expressing some serious concern about their kid's safety.

Even though it has been medically proven that children are less likely to contract the virus...

Many parents - especially those who have underlying medical conditions - are worried about sending them back to a busy and crowded environment.

So it is unsurprising that many parents have decided to keep their kids at home...

And they are schooling them themselves instead of taking the risk of having their children in the classroom with thirty other people.

Of course, this is very difficult for both the parents and their children...

And even for the kids attending virtual classes, being home-schooled isn't an easy adjustment.

But thanks to the kindness of one man from Lemoore, this adjustment has been made slightly easier.

Mitch Couch is a woodworker by trade and he has decided to spend his spare time helping out these poor kids.

Mitch has been fashioning school desks for all the kids who are having to learn from home.

It all started on September 3rd when he shared a photo on Instagram of a desk he constructed for his own children, revealing that it was not only easy but inexpensive to make

"I know many of our little ones are still home doing distant learning. Our two kids were taking up space at the kitchen table making it a hassle when it came time for meals. So I made them their own little desks." He continued, "The cool thing is they can store their items in it after they are done and it can be folded away later to take up less space. If you want to try your hand at making your own, check out my Etsy page, they are immediate downloads for 99 cents. I made this one for around $35."

Soon after, local business owners contacted him asking if he could make some desks for them to be donated to local schools.

Mitch cracked on with the job straight away...

"They asked for twenty-five desks to start but the need was great so we upped it to thirty-five!!! My wonderful wife helped me through the whole thing and even surprised me with four desks she made while I was at work," he told Scary Mommy.

Mitch is still in the process of finishing up the desks...

"I have 8 more [desks] to make and will be done with those by tomorrow," he said. "They are all called for since the demand for them is so high. I really think I could make a hundred of them and that still might not be enough."

Since Mitch's story was published, he has been graciously praised for his generous act...

And it goes to show that humanity still does exist!

Here are the desks Mitch made:

Truly amazing! For more, keep on scrolling to read about the high school that suspended 2 students for posting photos of their crowded hallways...