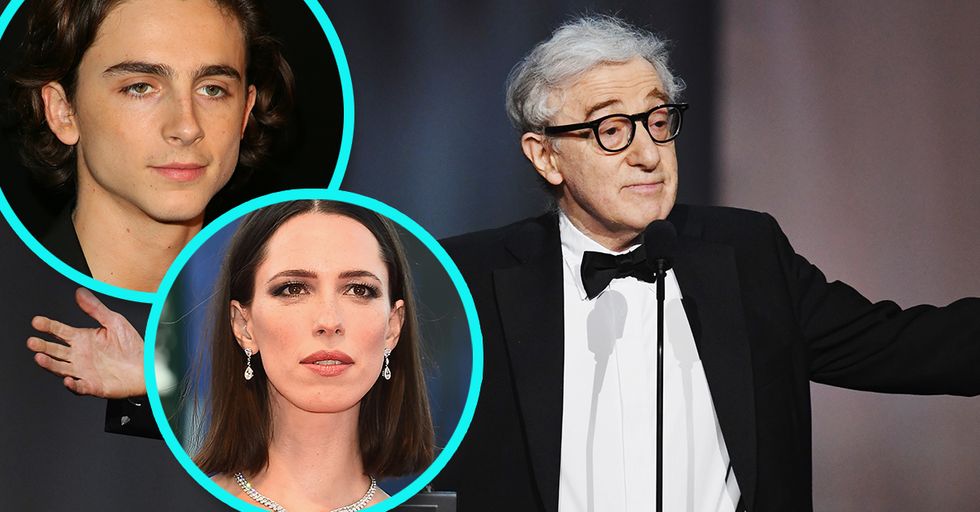 This week, CBS released a clip from Dylan Farrow's interview with CBS This Morning‘s Gayle King. It is Farrow's first television interview since she accused her stepfather, noted Hollywood auteur Woody Allen, of sexually molesting her in 1992 when she was a seven-year-old child.

In the clip, King tells Farrow, "Someone said this to me, ‘She wants to bring Woody Allen down. She’s caught up in the Me Too, Time’s Up movement and this is really what she’s trying to do, is bring him down."

Farrow has never deviated from her statement that when she was seven years old, Woody Allen led her to the attic and assaulted her.
In a 2017 op-ed, she wrote,

I have long maintained that when I was seven years old, Woody Allen led me into an attic, away from the babysitters who had been instructed never to leave me alone with him. He then sexually assaulted me.

Allen has long denied the accusations, but there has always been a shadow over his career, especially considering he also groomed and then married his teenaged adopted daughter, Soon-Yi.

Furthermore, as Farrow maintains, "this is not a 'he said, child said' situation." She goes on to explain:

Allen’s pattern of inappropriate behavior — putting his thumb in my mouth, climbing into bed with me in his underwear, constant grooming and touching — was witnessed by friends and family members. At the time of the alleged assault, he was in therapy for his conduct towards me. Three eyewitnesses substantiated my account, including a babysitter who saw Allen with his head buried in my lap after he had taken off my underwear. Allen refused to take a polygraph administered by the Connecticut state police.

Timothée Chalamet on donating his salary from Woody Allen's new film: "I want to be worthy of standing shoulder to… https://t.co/y6CaKwAwwa
— IndieWire (@IndieWire)1516150800.0

A judge was also concerned enough to take steps to protect Farrow.

In the final legal disposition of the matter, a judge denied him custody of me, writing that “measures must be taken to protect" me and that there was “no credible evidence" that my mother, Mia Farrow, coached me in any way. A prosecutor took the unusual step of announcing that he had probable cause to charge Allen but declined in order to spare me, a “child victim," from an exhausting trial.

After Farrow's op-ed, Hollywood has been backing away from Allen, with insiders saying there is "no way back" for the 82-year-old director. His new film, A Rainy Day in New York is having difficulties rolling out, with actors shying away from publicity and red carpets.

The UK Mirror quotes one source as saying:

Nobody will stand for seeing a big red carpet premiere, huge billboards or wide releases of a Woody Allen movie any time soon. How can they send their cast to do interviews? Half of them have said they regret filming it and the other half will be torn apart by every interviewer for their decision. Allen’s career is teetering on the brink. There could be no way back.

Actors are also distancing themselves in their own ways. Timothee Chalamet, breakout star of the movie Call Me By Your Name, also starred in A Rainy Day in New York. He has donated his salary to charity, as has co-star Rebecca Hall.

"I don’t want to profit from my work on the film," Chalamet said, adding that he first joined the project because he is "a young actor trying to walk in the footsteps of more seasoned actors I admire."

I am learning that a good role isn’t the only criteria for accepting a job—that has become much clearer to me in the past few months, having witnessed the birth of a powerful movement intent on ending injustice, inequality and, above all, silence.

Selena Gomez has also made a "significant donation" that was more than her salary for the film to the Times Up defense fund. She is not, however, disavowing Allen, even though her mother, Mandy Teefey warned her about him before the film.

"Sorry, No one can make Selena do anything she doesn’t want to. I had a long talk with her about not working with him and it didn’t click," she wrote... "Her team are amazing people. There is no fall person here. No one controls her. She makes all her own decisions. No matter how hard you try to advise. It falls on deaf ears."

At least one star still supports Woody Allen. Alec Baldwin, who has worked with Allen on three films, said that Hollywood's renunciation of the aging director was "unfair and sad," further adding,

I worked [with Woody Allen] 3 times and it was one of the privileges of my career... Is it possible to support survivors of pedophilia and sexual assault/abuse and also believe that [Woody Allen] is innocent? I think so. The intention is not to dismiss or ignore such complaints. But accusing [people] of such crimes should be treated carefully. On behalf of the victims as well.

Woody Allen was investigated forensically by two states (NY and CT) and no charges were filed. The renunciation of him and his work, no doubt, has some purpose. But it’s unfair and sad to me. I worked w WA 3 times and it was one of the privileges of my career.

Is it possible to support survivors of pedophilia and sexual assault/abuse and also believe that WA is innocent? I think so. The intention is not to dismiss or ignore such complaints. But accusing ppl of such crimes should be treated carefully. On behalf of the victims, as well.

Not everyone is defiant, however, Mira Sorvino, who won an Oscar in 1995 for the Woody Allen comedy Mighty Aphrodite wrote a letter of apology to Farrow explaining,

I confess that at the time I worked for Woody Allen I was a naive young actress. I swallowed the media’s portrayal of your abuse allegations against your father as an outgrowth of a twisted custody battle between Mia Farrow and him, and did not look further into the situation, for which I am terribly sorry. For this I also owe an apology to Mia.

It is difficult to sever ties and denounce your heroes, your benefactors, whom you fondly admired and felt a debt of gratitude toward for your entire career's existence.

I am sorry, I believe you and support you @realdylanfarrow ! Exclusive: Mira Sorvino's open letter to Dylan Farrow… https://t.co/Y4knEUbNOl
— Mira Sorvino (@Mira Sorvino)1515645535.0

Allen, of course, has denied all the claims. In 2014, he wrote an op-ed in The New York Times saying "Of course, I did not molest Dylan." Now it's Farrow's turn. In the press release for the interview, she is quoted in as saying, "I am credible, and I am telling the truth, and I think it’s important that people realize that one victim, one accuser, matters. And that they are enough to change things."