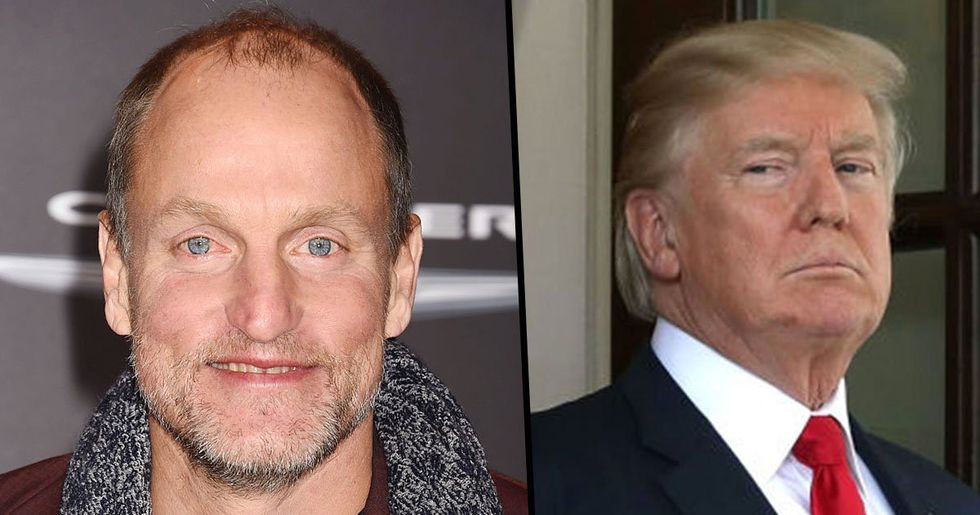 If the question "when is it appropriate to get high?" came up on Family Feud, I think that the first family member to buzz in with "when in the company of President Donald Trump" would take the steal.

In all seriousness, though, before we get into the nitty-gritty of this story and we can all start casting our judgment over whether getting high is bad or good or whether Woody Harrelson is a bad guy for disrespecting the president and promoting drug use, I want to say this:

Getting high takes the edge off, for some people anyway - and this story is less about Harrelson smoking pot and more about getting a glimpse of what Donald Trump is like behind the presidential curtain.

What Harrelson endured during his dinner with Trump in 2004, I think we'll all agree, would make anyone want to take the edge off.

How do you end up getting an invite to dinner with Donald Trump?

When you've got something he wants, of course! In this case, it was actor, Woody Harrelson's, good pal, Jesse Ventura, that Trump was interested in getting on side. Woody just went along for the ride.

Ventura is a former pro-wrestler, actor, television personality, and someone that used fame to his advantage when he successfully ran a campaign to become Governor of Minnesota. Ventura is a political guy and, since leaving office in 2003, has repeatedly alluded to the fact that he might run for the presidential seat under the Green Party ticket.

Ventura and Trump aren't exactly two peas in a pod.

Ventura has a colorful history. After having served in the Navy during the Vietnam War, he became a pro-wrestler for WWF, and even served as the bodyguard for the Rolling Stones at some point - Mick Jagger spoke of him, stating: "He's done us proud, hasn't he? He's been fantastic."

Ventura didn't get into politics because he had the wealth to make it happen.

When Jess Ventura ran for Governor of Minnesota in 1998 he ran a grass-roots campaign and spent considerably less than his opponents (roughly about $300,000). Ventura was one of the first to use the internet to reach out to voters - something that was pioneering at the time. (Maybe Ventura and Trump do have something in common...)

He suggested that he might leave his role as Governor early to allow his lieutenant Governor, Mae Schunk, to be the first female to hold the position "until the new man takes office". These comments reflect Ventura's attitude to American politics perfectly - he was cynical, no, he was aware of the cracks in the political system. As a governor, Ventura was outspoken. Since giving up his seat, he has remained firmly outspoken about American politics, having written a fair few books on the subject.

From the title of this book written by Ventura in 2012, it's quite clear that Jesse doesn't favor either leading political party highly. He also wrote a book called Sh*t Politicians Say: The Funniest, Dumbest, Most Outrageous Things Ever Uttered By Our "Leaders" (2016) - I wonder whether he's considered making an updated version. He could write an entirely separate book with the stuff Trump has said since he's been elected. You could fill a book with his dumb tweets alone!

Do I Stand Alone? Going to the Mat Against Political Pawns and Media Jackals (2000).

This book was written by Ventura at the dawn of the new Millenium and it floated ideas about wanting blunt, no BS politics. I think that it's fair to say that  Trump probably took a few tips from Ventura's popularity and success when he made his election campaign.

One of Ventura's political advisers, Bill Hillsman, said in 2016: “Donald Trump’s campaign is just Jesse’s campaign writ very large, with more money and some hugely advantageous communications tools." He continued by saying that it's no surprise that Trump would take advantage of the Ventura model, given that "Jesse’s success is the perfect case history to show this can happen." And it wouldn't be the first time that Trump has re-worked elements of other political candidates' campaigns into his own.

Sadly, Trump was the wrong jockey riding the right horse...

The two men's different social consciousness is what really sets them apart. Ventura supported open borders and said during a 1998 debate that the government shouldn’t be involved in who may marry. Whereas Trump wants to build a wall, has immigrants in cages, and rejected gay marriage.

So what happened when they sat down for dinner in 2004? Thanks to Woody Harrelson, we now know.

Prior to his election campaign, it's understandable that Trump would want to get some advice from people who knew how it all worked. I wouldn't be surprised if Trump had leafed through a few of Ventura's straight-talking political books and manifestos.

"Donald Trump is going to try to convince me to be his running mate for the Democratic ticket in 2004. Will you be my date?"

It would have been smart for Trump to get Jesse Ventura to be his running mate, given his previous success in winning a political campaign. That being said, there was never any way that Ventura would have helped a wealthy, racist a-hole like Trump rise to power.

Ventura and Harrelson probably thought that it might be a laugh.

Little did the two down-to-earth guys know when they showed up at Trump Towers in 2004 that Donald Trump would actually become President of the United States.

Jesse Ventura was never going to help Trump to run.

Although the model that he left in his wake more than certainly gave Trump a helping hand, Ventura certainly wasn't going to go in cahoots. Like a fly on the wall, Harrelson watched as Trump wrestled with the pro...

Speaking to Esquire, Harrelson described how Ventura had played with Trump. He said: "It would look like Trump had him pinned, was going to get him to say yes, and then Jesse would slip out at the last second."

According to Harrelson, Trump certainly likes the sound of his own voice (surprise, surprise). "Now, at a fair table with four people, each person is entitled to 25 percent of the conversation, right? I’d say Melania got about 0.1 percent, maybe. I got about 1 percent. And the governor, Jesse, he got about 3 percent. Trump took the rest."

There's nothing worse than someone who won't shut up.

It's little wonder that, considering the dinner lasted an arduous two and a half hours, Harrelson felt the need to take a, ahem, break: "It got so bad I had to go outside and burn one before returning to the monologue monopoly."

"I came up through Hollywood, so I’ve seen narcissists..."

I think this is my favorite part of Harrelson's description of Trump, purely because we all can relate to that feeling of meeting someone that really raises the bar of how bad a person can be. And it's no surprise that Trump raised the narcissist bar for Harrelson. The full quote read: “I came up through Hollywood, so I’ve seen narcissists. This guy was beyond. It blew my mind."

Did Trump say anything insightful during his "monopoly monologue?"

Well, according to Woody Harrelson, Donald Trump only said one true thing during the entirety of his two and a half hour talkathon. "You know, I’m worth four billion dollars." I mean, as far as small talk goes, letting your dinner guests know how much you've got in the bank isn't exactly what I'd call a good start. But, eh, what's Trump if not an arrogant show-off? But it's what he said about that fortune that interested Woody...

Trump mused about what would happen after he was gone.

According to Harrelson, Trump said that his "kids are going to fight over" whatever's left of the fortune when he was gone. Leaches, every last one of them, you can imagine him saying. The whole thing seems like it was right out of one of Woody Harrelson's movies. Sadly, this isn't any Hollywood picture, we genuinely do have a narcissistic miser for our president now.

Could the future foresee Trump's daughter, Ivanka, fighting for her dad's spot as president? Heaven forbid, but it's not like it hasn't been brought up before. As for 2020, odds that Ivanka will run have been diminished with her announcing that she will serve as "Assistant to the President" - an unpaid role that the Trump administration have just sort of made up. I have a sickly feeling that this may well be some contorted version of an "internship" at daddy's company, in the hopes of running the shop one day. Perhaps Woody Harrelson is thinking the same.

But, before Ivanka takes over the reins, there's still plenty of time for Trump to make more outlandish comments and project his ignorant insight onto the American public.

Take his comments about the mass shootings that happened this weekend, for one. Continue scrolling to learn what our president said in regards to the shootings that took countless lives in Texas and Ohio...