Workplace Fails That Will Have You Cringing | 22 Words 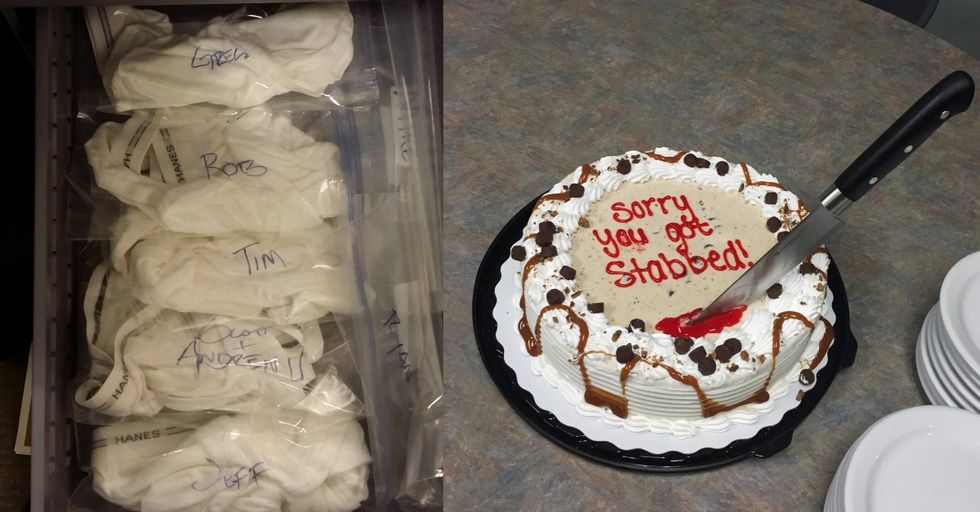 Workplace Fails That Will Have You Cringing

It can be tough to find a job that you actually enjoy. Everyone dreams of finding a profession that feels more like a hobby than a grueling 9 to 5, yet few people can actually make that happen. Either you find something that you like doing but can barely make ends meet, or you're financially secure but forced to work a job that you despise. No matter which of these two categories you fall into, you've probably experienced your fair share of "work fails" while on the clock. And while it's not funny when it happens to you, it's extremely funny when it happens to somebody else, which is why these work-related fails will make your workday a whole lot better.

From email snafus to clumsy co-workers to accidentally drinking a water bottle full of vodka in the office (keep scrolling for the whole story...), these work fails are a great way to kill some time before 5 pm.

Oh, and if you're wondering, yes, the perfect job does exist. And it pays handsomely in puppy kisses.

At least he kept a smile on his face until the end. That man is an inspiration.

Being haughty about your own misspelled name is not an easy thing to recover from. Although to be fair, R and T are right next to each other on the keyboard. It's an easy misrake to make.

This diagram could either be the result of someone who doesn't understand how Venn diagrams work, or it's just an incredibly truthful representative about how little this company values trust, partnership, innovation, and performance. Either way, it probably shouldn't be hung in public.

This guy's boss has no sense of humor. I'm sure no co-workers were traumatized for life after spotting this terrifying ceiling ghoul while filling out their expense reports.

Let's be real; she probably sent her resume out to at least one or two madmen during her job search. You'd hope they'd have enough self awareness to know this about themselves and give her a shot anyway.

As someone who regularly orders the Doritos Locos Nacho Supreme Taco at Taco Bell, this image hits a little too close to home for me.

Now it all makes sense why he got so many responses from grocery stores and farmer's markets.

I'm willing to bet that more than one drunk guy wandered into this "ladies room" during this office party and "watered" these poor, defenseless floral arrangements.

The fact that the "I" is hidden in the "A-hole" really says a lot, doesn't it? Although this only works if "TEAM" is written all in caps and in a very specific font. Let's all keep that in mind the next time we're forced to work on a group project.

Is your co-worker toddler-sized? What kind of gas mileage does this thing get? Does it have seatbelts? I have so many questions.

It's all fun and games until the cops are called. Don't try this one at home, friends.

I don't think the person who put up this billboard has ever seen a human woman before. And if they have, there was something seriously wrong with her.

We've all been there. At least she just forgot to attach an attachment. I once sent my college professor an email complaining about how much I hated her class that was meant for my roommate. I was forced to drop her class out of embarrassment.

When something like this happens, you have no choice but to play along. "Of course I bought this sweater specifically for an ugly sweater party! I don't actually love crocheted cats wearing party hats! Haha!"

This is the work of an evil genius. Where can I buy these "voice-activated" stickers in bulk? Asking for a friend...

I'm not going to lie, I would still eat these caramels. But my house is covered in dog hair at all times so I could probably cough up a hairball from the amount I ingest on a daily basis.

Nothing like getting a boost of confidence from your valued coworkers! If I were that guy, I would think twice about eating a slice of that cake.

She should have just played it off by saying, "Oh, I just wanted to give you a quick tour of my home!" He might have even taken pity on her and offered her a raise after seeing how pathetic her house was. You have to look at every humiliating experience as an opportunity for success, people.

Sure, this might seem like a win at first glance, but I think the real failure here is the bizarre floor in that office. Why is it constructed from ceiling tiles? What kind of topsy turvy place is this?!

What a ray of sunshine! Linda, don't let this grouch get you down. I'm sure your comments about the unseasonably cold weather and terrible traffic on I-94 are beloved by everyone else in the office.

Oof. Hopefully it was worth it. A 10,000-dollar bottle of wine would be lost on me, since I can barely tell the difference between a red and a white.

Poor Stan. He was probably left wondering what he did to deserve such a harsh sendoff.

Now, this is just plain mean. Seriously, though, can we see that video?

Actually, they said the view was "nuts" and this person just jumped to conclusions.

I realize that this is a bit dark, but in my opinion, anything that results in cake can't be all bad. Plus, I'm pretty sure this is an ice cream cake. I'd be open to some light stabbing if it resulted in ice cream cake.

I laughed at this for a very, very long time. And I'm guessing whoever received this email did the same.

If this were me, I'd just think of it as free breath freshener. But I'm a glass-half-full type of person.

Am I the only person who's concerned about the employee who's keeping vodka in a water bottle in the work fridge?

Ya know how you can look at a photo and picture exactly what it smells like? This is one of those photos. And it smells terrible.