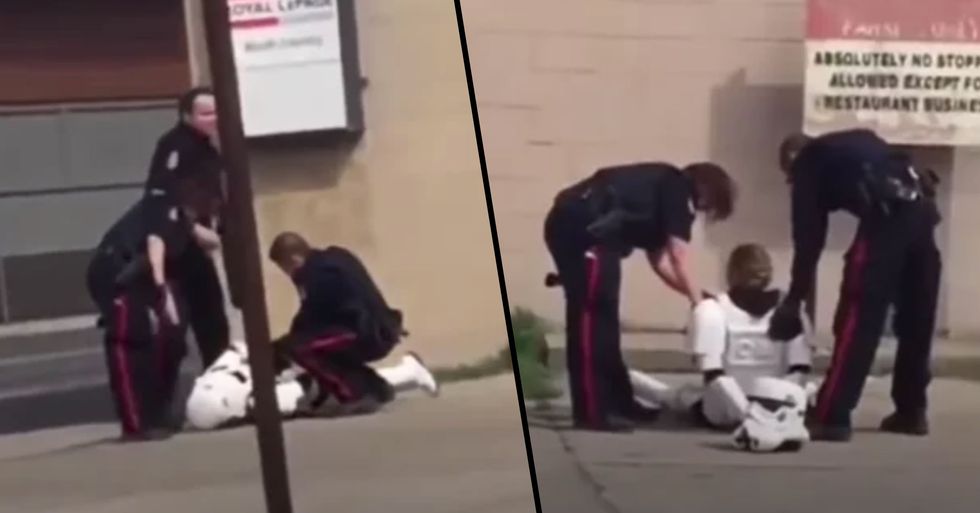 It turns out that being a Stormtrooper isn't everything that it's cracked up to be.

Shocking footage has emerged of a restaurant worker who was dressed as a Stormtrooper being held at gunpoint by police because they thought her blaster was real.

The third installment of the Star Wars sequel trilogy and final movie in the Skywalker saga, The Rise of Skywalker, was released last year.

The movie saw the Resistance face the First Order once again - resulting in the end of the ancient conflict between the Jedi and the Sith.

The franchise has a huge fan base...

And fans have been left repeatedly impressed with the final remake.

But what is it that fans love the most about Star Wars?

The incredible merchandise, of course!

There's nothing quite as cool as dressing up as a Stormtrooper..

And for some people, being a Stormtrooper helps them pay the bills.

You can find Stormtroopers in all kinds of different places...

Including at Disney Land, cinemas, and Star Wars-themed restaurants.

Being a Stormtrooper is a pretty cool job...

But one unfortunate Trooper landed herself in a rather sticky situation recently.

It all began at the Coco Vanilla Galatic Cantina in Lethbridge, Canada.

May the 4th is known as Star Wars Day, and employees at the sci-fi restaurant decided to celebrate by dressing up as Stormtroopers.

But police were called anonymously after someone expected one of the Storm Troopers to be carrying a live firearm.

Police flocked to the scene with their guns drawn, which immediately dampened the light-hearted mood at the restaurant.

Footage from the shocking incident shows armed officers pointing their gun at the employee, who turned out to be a nineteen-year-old woman.

"Get down on the ground!" they are heard screaming at her as she raises her hands in confusion.

Things then got ugly.

When she allegedly refused to comply with orders to get on the ground, the officers tackled her and forced her onto the sidewalk.

It is heartbreaking to watch as the woman is heard sobbing behind her mask.

The officers remove her mask to discover she has suffered a nosebleed from the scuffle, yet they proceed to handcuff her anyway.

The officers eventually realized that her "blaster" was fake and that she wasn't carrying a real gun.

She was completely innocent.

Bradley Whalen, the owner of Coco Vanilla Galactic Cantina, said his employee was promoting his Star Wars-themed business for Star Wars Day and not doing anything harmful.

"We wanted to do something different… just something to let people know that we are here," he said on his business to Global News.

"She was kind of walking out back-and-forth in front of the property by the sidewalk, just waving at people, and a couple of people stopped by and got a picture with her."

The responding officers are now facing backlash for the way in which they handled the situation.

LPS Chief Scott Woods has launched an investigation into the incident to determine whether the officers acted appropriately within the scope of their training and LPS policies.

The young woman was reportedly left extremely shaken by the ordeal.

We hope justice is served for this unfortunate woman who didn't at all deserve this treatment.

Make sure to keep scrolling to read about how the return of Darth Maul was teased for season 2 of Star Wars: The Mandalorian...
20%