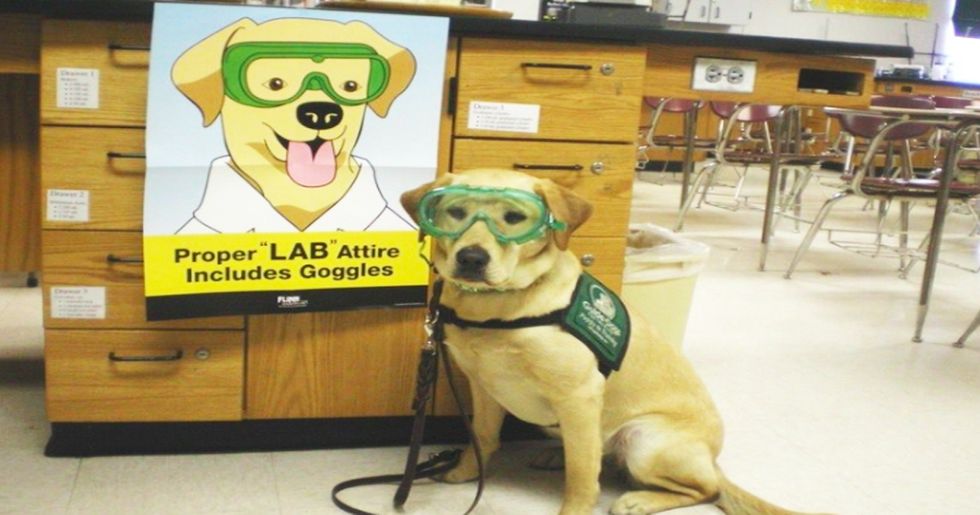 Animals With Jobs Who Are Killing the Employment Game

There are some jobs only adorable furry, fuzzy, and feathered creatures can do, and these lovable animals do them so well. Give these good boys and good girls promotions all around!

Like, have you ever been at the airport, and seen a dog you know is working really hard at sniffing for bombs, but it's all you can do not to learn down and pet the soft spot between its ears? I want to whisper to it, "I take you very seriously and I say this with the utmost respect, but oh my god you are so cute I want to smush you."

Ah yes, I've seen that look before. It's your first day at a brand-new job. You're bright-eyed and bushy-tailed and so excited to learn the ropes! He's going to do great.

This hawk has a very important job. He flies around Niagara Falls scaring pesky seagulls away from innocent humans who are trying to visit the waterfall. He takes his job very seriously.

This frisky feline is loving life on the farm. She chases rodents away, checks on all the animals, and even has some spare time to roll around in the grass.

Captain Scottie, reporting for duty! Call me crazy, but if I saw this little guy in the cockpit of my plane, I'd feel pretty good about my flight that day.

This little monkey dude is having a snack, on a break from his main job as a coconut harvester. He's got that blank look of someone going through the motions of the workday. I know it well. The next employee isn't so hard at work.

Look, she was supposed to be alphabetizing the classical CDs by artist, but then she got tired and had to take a nap! I get it.

"Welcome to Home Depot! Let me guess. Things are ruff at home. Well, you're in luck! I can help you smooth things out. Right this way!"

It's a little scary when you start training, but as long as you work hard and stay that cute, you will go far.

In his first week on the job, Rye found 60 pounds of meth! Way to set the bar way too high, Rye! Good luck living up to that job performance every week.

Look, it's real-life Zootopia! I can't get over the tiny handcuffs on her vest. Are those for mice? The next one will have you saying "Neigh!" but in a good way.

Trooper the police horse has received the highest honor: He has been immortalized as a stuffed animal. It doesn't get any more special than that.

This little nugget of a nurse is doing a very good job guarding and taking care of his patient. He clearly takes his job very seriously.

This donkey gets paid to walk around the outside of the airport and graze in order to keep the grass short. Basically, he gets paid to eat all day. Dream job.

A hotel in Munich has this good boy as its greeter for all the guests, and whoops, guess I have to book a trip to Munich now.

Bring your dog to work

When it's "bring your dog to work day" but you are a dog. The next one will make you go, "Awwww."

Sleeping on the job

After a hard day of work, all you want to do is wind down and relax and cuddle with your favorite coworker.

This little kitten showed up at the loading dock for a company that sells process valves, so she was put to work as a model for their advertising, and may I just say she is doing a fantastic job.

You know that feeling when you live up to your potential super well? This guard dog knows. She's as dedicated as ever to her position.

Dave the lab is hard at work making your lawn perfect so he can then go pee all over it. The next also features a lab...this time, in a lab.

This lab is following all the safety procedures for the lab because he is a good boy. A good boy who has his own illustrated version of himself!

This service dog in training is doing her very best every day. Also, she has a Pokemon backpack, and I think that's pretty cool.

This is Bor. Bor is an explosives detection canine for TSA at the Salt Lake City International Airport. Bor loves his job.

This dog has a very important job. Her name is Epi and she works with the fire department as an arson dog. She is trained to detect accelerants, but she is very humble about her work.

This pup is taking a short break from his summer training as a K9 dog. The next one is too cute for words.

His first day on the job has revealed this pup to be a dedicated guide dog in training. We can't wait to see how he does.

"Dude, there's a squirrel over there! A lone squirrel, just roaming around stealing everybody's nuts! You're going to tell me you're going to let him get away with that?"

Dixie clearly takes her job very seriously. She's got the matching vest to prove it.

Marley the explosives detection dog clearly wants you to ignore that "Do Not Pet" sign. But I guess you shouldn't. Share this with an animal lover in your life!