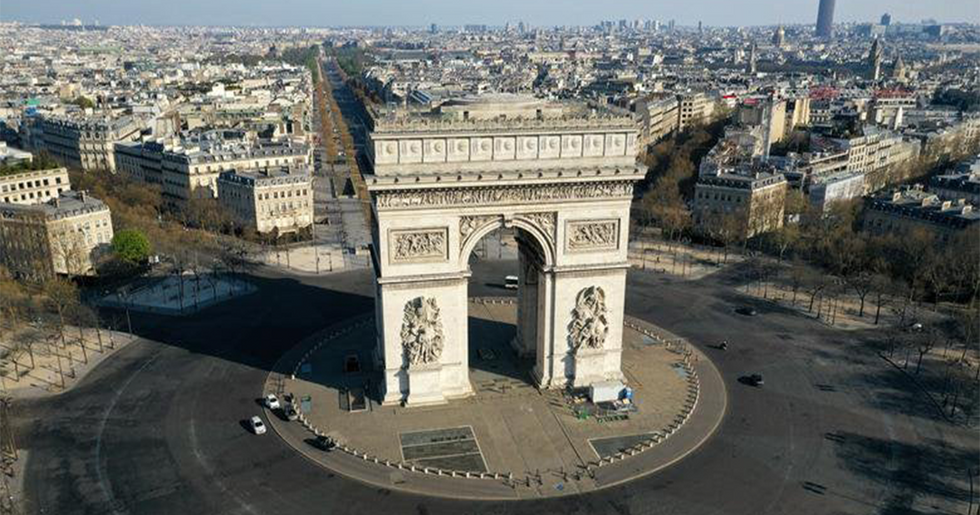 As COVID-19 spreads across the globe, more and more countries are going into lockdown. People are staying home (at least those who aren't spring breaking), and it's left some of our most iconic spaces completely empty. Whole cities that are usually bustling and crowded look like something out of an apocalyptic movie: completely empty.

The images are striking. Imagine Times Square without the people, an LA highway with no cars. These are scenes that you've never seen before, and will likely never see again. We've rounded up some of the most amazing photos coming from cities without people and have them here for you to check out.

We may be stuck at home, but we can travel the world in a new way. Without other people, we can explore the architecture of our empty cities. Click through to see these beautiful and ever so slightly creepy photos of the world without people.

Miami is typically crammed with people.

The aerial shots are truly striking.

This amusement park is lying dormant on a beautiful day. The colorful rides seem like artwork, but the whole picture is still unnerving.

Here's where it all started.

Empty streets in Wuhan, China. In one of the most populous countries in the world you can't see a single person.

When you think of Rio de Janeiro, you probably think crowds and color.

Which makes it all the more unnerving to look at this image of the city without anyone out.

And a little closer to home, this street in San Francisco is usually bustling.

Not so much right now. It's weird to see so much sky in so many cities.

Across the pond things aren't much different.

This intersection in London is absolutely vacant. The weirdest part is knowing all the people are still there, just hidden away at home.

Let's add a little bit to the weird factor.

In Toronto, Canada, Dundas Square is not only empty, all of the billboards are showing COVID-19 related messages. It looks like something out of a movie.

This one hits hard.

Everything in the Las Vegas strip is closed down. No lights, no shows, no glitz, and no glam. It's like a completely different place.

It even looks like entire cities are closed down.

This shot of Copenhagen makes it seem as if the entire place is abandoned. That grey sky doesn't help the feeling of foreboding.

You've probably heard of the Red Square in Moscow.

Normally you'll see it packed full of people, or the site of some political demonstration. Now there's just...this.

Not all the photos are so sobering.

This image of Los Angeles shows how clear the skies are looking without the thousands of commuters contributing to the smog.

If you've ever tried to drive in Chicago you know it's not exactly fun...

Which is why these ghostly empty streets are even more off. Where is everyone (oh right staying inside like they should).

Gondolas and boats abound on its canals, which are serene and untouched these days.

Another capital city without its people.

Buenos Aires is devoid of life: a concrete jungle with no inhabitants.

We absolutely had to include a picture or two from NYC.

And you can see why: a city like this was built for masses of people. It looks wrong without them.

The Arc de Triomphe is one of the most iconic landmarks in Paris.

People throng from all across the globe to look at it...but apparently not anymore. It's deserted.

In Vienna the city looks abandoned.

It's like a perfectly preserved ruin. Can you imagine what we'll be like when we get to walk down the street again?

Some landmarks aren't buildings, but roads.

Like the Champs Elysee Avenue in Paris: it's where people go for shopping, eating, and seeing the arts. Now it's shuttered.

Speaking of eating and shopping...

New Orleans is known for the sheer life that you can find there. Music! Food! Drink! It's so sad to see it without any of those things.

Chinatown in London exists to bring in people.

It's colorful and lively...and completely empty right now. It's eerie.

A time when people are out and enjoying the beautiful sunlight. This Chicago street should be packed.

You may recall King's Cross Station from the Harry Potter books.

It's one of the busiest subway stations around, but thanks to the closures there's no one using it.

Another London attraction is Coven Garden, a shopping center and home of theater.

It looks like an abandoned mall. I'm just waiting for the zombies to appear.

In Russia, the snow makes everything look more melancholy.

Especially the beautiful buildings of the Kremlin and St. Paul's Cathedral without any people in them.

Union Square is a historic intersection, home of Broadway!

Now it's home to pigeons. I never thought I'd see this much pavement without people in New York City.

Even the colleges have emptied out.

This is Harvard's campus, which should be full of students prepping for finals. They're all at home instead.

Featured in every movie set in London ever, Piccadilly Circus is a famed intersection.

It seems much less impressive when there aren't any cars on it though. It's just a little bit sad.

One of the hardest hit industries is airlines.

Airports are ghost towns. Remember the days of waiting for hours in line at security? I'd give anything for those days.

It's all across the globe, too.

In Kuwait you can't see cars for miles on the streets. Long stretches of highway just outside the city, and no one's there.

Last, but most certainly not least: Times Square.

Of all the places in the universe that we thought we would see without people, this is the last one. It's a perfect image of the current lockdown. Stay tuned for all the celebrities currently quarantined in their homes...