The World Needs Mr. Rogers Now More Than Ever | 22 Words 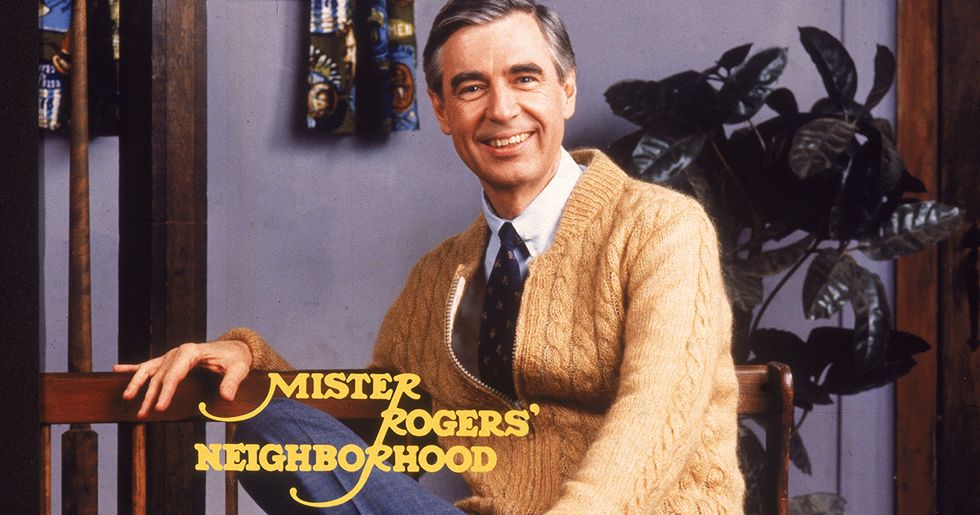 The World Needs Mr. Rogers Now More Than Ever

For more than 900 episodes spanning four decades, Fred Rogers taught multiple generations of kids a thing or two about caring, compassion, and kindness. Arguably everybody’s favorite neighbor, if you grew up watching Mister Rogers’ Neighborhood, then you understood the importance of imagination, of learning about different people, and of being yourself.

Born in 1928, Fred Rogers (Mr. Rogers as his millions of fans know him) may be most famous as a television show host and puppeteer. But his impact goes far beyond what we saw every day on our television sets. The winner of the Presidential Medal of Freedom and more than 40 honorary degrees, Fred Rogers entered the seminary after college and was ordained as a Presbyterian minister. But he wanted to go into televisions — because, as he told CNN once in an interview, “I hated it so. I thought there's some way of using this fabulous instrument to nurture those who would watch and listen."

And that’s what he did for the bulk of his career — use the medium of television to impart life-lessons on those who needed it most — kids. Now, in a time when budgets for education and public broadcasting stations are at constant risk of being axed; when social media and TV news are seemingly flooded when negativity; when TV no longer has a Mr. Rogers teaching empathy and understanding on a daily basis — his impact feels more essential than ever.

So here’s a crash course in Mr. Rogers 101 — from simple quotes long associated with the TV legend to bits of advice and pearls of wisdom he offered over the years, you could fill a textbook of lesson plans with Mr. Rogers-isms. And if there’s any class the world could benefit from now, it’s a class that offers love over fear, individuality over identicalness, and compassion over hatred.

“Won’t you be my neighbor?"

It’s the name of the 2018 documentary about the life of Fred Rogers and the guiding philosophy with which he kicked off each show. At the top of each episode of Mister Rogers’ Neighborhood, the host would sing, “it’s a beautiful day in the neighborhood, a beautiful day for a neighbor/would you be mine, could you be mine. It was his ode for inclusiveness and for welcoming those who are different from you. It’s a song that resonates with the generations of kids who grew up with him and yet, an ABC Nightline news report suggests how “utterly that song would fail" in the current political climate. “Do we need Mr. Rogers now more than ever? According to ABC Nightline, that’s the implicit question asked by the documentary, and some simple stats suggest we do.

Do we actually know our neighbors?

According to Pew surveys over the last decade, every year, Americans know less and less about their neighbors — a large shift from 30 years ago (the height of Mr. Rogers’ popularity — when most people at least knew the names of those they live alongside. This lack of community and familiarity, the survey suggests, leads to a lack of understanding and compassion for vulnerable communities, including “women, minorities, and LGBT people." “Won’t you be my neighbor" now sounds more like “won’t you get out of my neighborhood." Want further evidence that people are starved for a man like Mr. Rogers in the world today? Won’t You Be My Neighbor has grossed $23 million in the U.S. alone, making it the highest-grossing biographical documentary of all-time.

“When I was a boy and I would see scary things in the news, my mother would say to me, ‘Look for the helpers. You will always find people who are helping.’"

The world can be a scary place, and that’s never more evident than when a tragedy strikes. Whether its a school shooting or a natural disaster, news channels tend to switch 100% of their coverage to the tragedy at hand. How many victims, how did happen, could it have been avoided. But inevitably, at some point, the coverage changes. Marjory Stoneman Douglas High School in Parkland, Florida — from the student activists who were born out of tragedy to teachers and students who were honored for their heroism, they became the story, and thus, they started driving the narrative. That’s who Mr. Rogers told stories about — that’s where he chose to focus his energy. On the people who took, in the face of seemingly insurmountable obstacles, saw an opportunity to do good and to help others. Whether it’s a shooting or a hurricane or an earthquake, without fail, “you will always find people helping." It’s important to remember Mr. Rogers’ mother ‘s words of wisdom when the world looks bleak.

"Being the best loser takes talent, just as being the best winner does. Whether you're first or middle or last, what's important is that you're you. And people can like you just the way you are."

In life, “you’re going to lose more often than you win, even if you’re good at something," Jean Twenge, author of “Generation Me," told The New York Times. “You’ve got to get used to that to keep going." It's easier said than done when society sends such conflicting messages about what it means to win and lose. On the one hand, there’s the “everyone’s a winner" approach — the one that rewards people with trophies just for participating, something experts say actually does kids a disservice because it fails to prepare them for the reality that losing is sometimes a part of life. But overpraising kids for being a winner is also risky behavior because it actually makes it more difficult for kids to cope when they’re actually confronted with losing. Instead, as Mr. Rogers puts it, praising kids for their effort over their ability actually encourages them to strive harder and become better versions of themselves — those kids thrive.

"I got into television because I saw people throwing pies in each other's faces, and that's such demeaning behavior. And if there's anything that bothers me, it's one person demeaning another."

Just imagine if Mr. Rogers had to spend a day watching the top shows on television now. Think about it. TV’s most popular reality programs are all about demeaning and manipulating each other. It’s why the Real Housewives reunions need to be divided into three parts — so the women have ample time to rip each other apart. It’s why there are countless iterations of The Bachelor — so people can watch someone get rejected on national television. Even with competition shows like Survivor or Big Brother, it’s all about getting the upper hand on someone else. In fact, a 2016 study conducted at the University of Wisconsin found that reality television viewers believe that the argumentative and conniving behaviors portrayed on television shows is considered normal in today’s society. And if you think it’s bad on reality TV, spend 20 minutes watching the debate segment on a cable news show. If people watching TV think the behavior they see is normal, just imagine how differently they’d behave if the bulk of what they had to watch followed Mr. Rogers’ view of the world?

“The values we care about the deepest, and the movements within society that support those values, command our love. When those things that we care about so deeply become endangered, we become enraged. And what a healthy thing that is! Without it, we would never stand up and speak out for what we believe."

Here’s an area where Mr. Rogers might actually be proud of the America that is happening today, though some would argue he’d find a way to lead more with love and anger than with passion and violence. But regardless of which side of the political divide you stand on, the last few years have ushered in an era of protest and political demonstration that this country hasn’t seen in a very young time. And seemingly much of it was born out of an era of complacency — things got relatively comfortable in the country and when the apple cart was upended, people took action. From the Women’s March to anti-gun violence rallies to immigration protests to people rallying support behind Puerto Rico, much of the political action we’ve seen on the TV sets and social media in recent months has been sparked by people who had decided they were upset enough to do something about it.

Fred Rogers had issues that he was passionate about. In fact, he’s almost solely credited with saving funding for public television, with a passionate testimony before a Senate Subcommittee that has been viewed millions of times and is often used as an example of how to use your voice for good. Here’s just a taste of what Mr., Rogers said that day — never screaming, never raising his voice... “This is what I give. I give an expression of care every day to each child, to help him realize that he is unique. I end the program by saying, “You’ve made this day a special day, by just your being you. There’s no person in the whole world like you, and I like you, just the way you are." And I feel that if we in public television can only make it clear that feelings are mentionable and manageable, we will have done a great service for mental health. I think that it’s much more dramatic that two men could be working out their feelings of anger ― much more dramatic than showing something of gunfire." And with that, Mr. Rogers gave an example, reciting the words to a song he featured on his program, aimed at teaching young people how to deal with their anger. And when he was finished, Sen. John O. Pastore, the chairman of the subcommittee, responded with:
“I’m supposed to be a pretty tough guy, and this is the first time I’ve had goosebumps for the last two days," he said. “Looks like you just earned the $20 million." Imagine, if all Senate hearings were handled with such composure in 2018, the things we could accomplish.

“There’s only one person in the whole world like you — that’s you yourself."

Perhaps more important than anything, Mr. Rogers spoke often in the importance of being an individual and not trying to be like anyone else, something that’s often tough to remember in a social media generation that forces people to live up to seemingly unattainable goals. But Mr. Rogers often guided people with the simple reminder that each and every person on this planet is important to someone, and that their impact is often profound. This quote perhaps illustrates this idea best of all. “As human beings, our job in life is to help people realize how rare and valuable each one of us really is, that each of us has something that no one else has–or ever will have–something inside that is unique to all time. “If you could only sense how important you are to the lives of those you meet; how important you can be to the people you may never even dream of. There is something of yourself that you leave at every meeting with another person."

And if that one doesn’t leave an impact, try this quote on for size.

“Knowing that we can be loved exactly as we are, gives us all the best opportunity for growing into the healthiest of people."