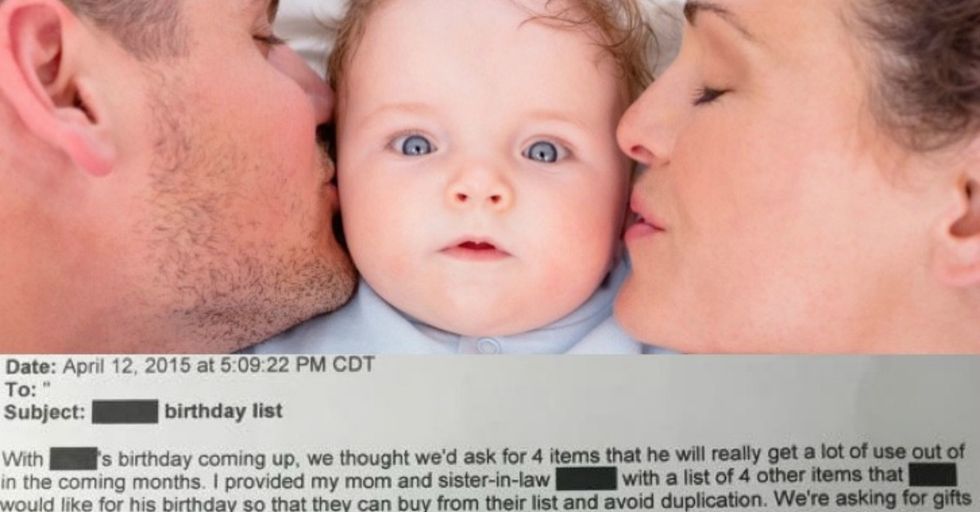 We've all seen parents who are just a little bit...different, usually on Facebook with their multiple posts a day documenting every time their kid has a bodily function.

Most of the time, the things new parents do are fairly benign as far as annoyances go.

Like bombarding our social media feeds with pictures of "baby's first literally everything."

Sure, that might be a little annoying, but it's also pretty normal behavior.

One Redditor though, has physical proof that their relatives are slightly insane.

They received an interesting "pre-invitation" letter for an upcoming 1st birthday party.

Good lord, where do we even start here?

To be fair, this does eliminate a lot of confusion that might surround the affair.

But it's the legal tone and the fact they're not really asking, but rather demanding.

So, without further ado, let's break this down.

Now I understand that getting duplicate presents can be a bummer, but this is a birthday party for a kid who will be more excited by the empty boxes, not a wedding registration.

Next, the specific items.

Okay, here are your choices. And if you're not going to spend your money on them despite the fact it's being asked of you to do so, let them know so their child is not immediately deprived of that Cheerios book.

That water table they listed on there... We followed the link for it and it's over FIVE HUNDRED DOLLARS.

It retails for $550, and that's before shipping.

I'm sorry, but no one else loves your child that much.

As if this could possibly get more insane.

Maybe they have a valid point here, but like the rest of this letter, there was probably a better way to get said point across. Don't worry though, there's still more!

Yes, it's a helpful reminder and nobody likes to waste time or money, but again, it's slightly condescending and presumptive.

This isn't even the actual invitation. I would love to see that gem.

A few commenters had their own ideas of what to get the baby.

We aren't sure about the kidnapping stats on kids with personalized items...

But if their items are personalized with their mother's name, does it count?

Regardless, it seems like this kid is gonna be in for a hell of a ride the next eighteen years.