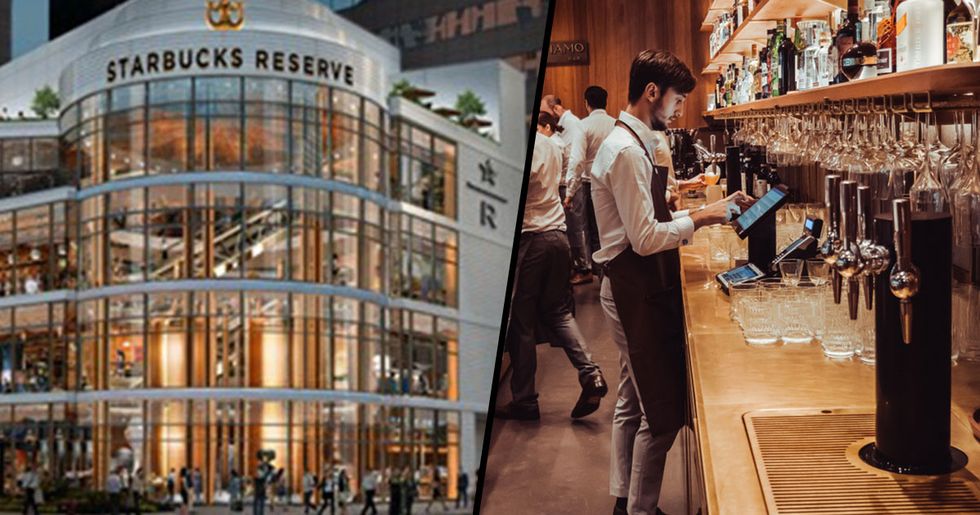 Coffee is a huge part of our lives. Whether it's grabbing a quick espresso on the way to work, having a leisurely cappuccino while catching up with an old friend, or cooling off with an iced latte during the summer, many of us opt for a regular caffeine fix.

There's no doubt that one of the leading figureheads of the coffee industry is Starbucks. It's not even fall yet (aka peak coffee season) and the hugely successful chain has been dominating the season with its trademark pumpkin spice range, including the brand new pumpkin cream cold brew.

And now the coffee giant has added the cherry on top of the caffeine-filled season by announcing plans to open its biggest store yet.

The plans are jawdropping. Keep scrolling to get all the details, because we don't have too long to wait until the store opens its doors...

Many of us enjoy a cup of coffee.

We don't know about you, but we struggle to survive the morning commute to work without one.

Most of us rely on the beverage to get us through the morning.

Let's be honest, those of us who regularly consume the drink struggle to go without.

Although it can be an expensive habit to keep.

All of those early morning coffees mount up.

One of the most popular coffee chains is Starbucks.

Whether you're a casual coffee drinker or can't live without your daily dose of caffeine, there aren't many of us who haven't taken a trip to the chain at some point.

The first-ever Starbucks opened in Seattle, Washington, on March 31, 1971, by 3 partners who met while they were students at the University of San Francisco: English teacher, Jerry Baldwin; history teacher, Zev Siegl; and writer, Gordon Bowke.

Dubbed as the face of "second wave coffee," the chain is by far one of the most popular choices for coffee drinkers across the globe.

Over the years, the coffee giant has expanded its stores.

With its soaring popularity, Starbucks hasn't simply stuck to plain old cafe locations. Across the world, the chain has 5 Reserve Roasteries, located in Milan, New York City, Seattle, Shanghai, and Tokyo which are much different from the beloved chain's high-street branches.

The main difference being that they are huge...

For example, the Roastery in Milan boasts a staggering 25,000-square-foot size.

The interior doesn't disappoint either.

The Milan Roastery is complete with hand-chiseled palladiana flooring, a wood-fired oven, and a marble bar.

Not only do visitors get to buy perfectly brewed coffee, but they also get to see the coffee being roasted on-site and learn more about the popular beverage.

There are also mixology bars...

Here, coffee and tea is added to alcohol to create the ultimate caffeine-infused cocktails. The branches also serve ice cream on top of their coffees as well as bakeries offering visitors a whole host of Italian-inspired drinks and snacks.

But now the coffee giant is adding to its growing worldwide catalog of Reserve Roasteries.

And, this time, it will be the biggest of its kind in the world.

The chain is opening a sixth Roastery in Chicago.

The branch will be a whopping 43,000 square ft, nearly twice the size of the Milan store, making it the biggest Starbucks location in the world. Don't worry, we've got pictures of the plans coming right up...

The Roastery is also set to stand tall at a staggering 4 stories high.

It's set to be every coffee-lover's dream. The new branch will be located on the Magnificent Mile in the iconic Crate & Barrel building at the corner of North Michigan Avenue and Erie Street.

Those lucky enough to take a trip to the new Roastery can expect much more than just traditional coffee.

A representative for Starbucks told Insider that the Chicago Reserve Roastery "will provide customers with an immersive experience dedicated to roasting and brewing small-batch Starbucks Reserve coffee from around the world."

Starbucks will be rolling out an array of tantalizing food and coffee products...

According to Starbucks, the complex will boast a bar serving "specialty cocktails developed by local mixologists" and "a full kitchen for making desserts, breads, pizzas, and salads from Italian bakery Princi."

They'll also be exclusive products only available in the Chicago store.

Starbucks says that the Chicago branch will include a handful of tea and mixology beverages "inspired by the culture and traditions of Chicago" that will only be available in this location.

It's certainly set to be impressive... it's literally an entire Starbucks building.

We don't have long to wait until the branch opens its doors.

Those desperate to head down and experience the Roastery in all its glory won't have long to wait as the branch is set to open on November 15 this year. We honestly can't wait. In the meantime, those waiting in anticipation for the grand opening will have to make do with the standard Starbucks high-street stores. Although, all is not lost, as the coffee giant has just started rolling out its fall-inspired pumpkin spice range, including one very tempting new addition. Keep scrolling to get a glimpse at the chain's brand new fall beverage.