When will things change? | 22 Words 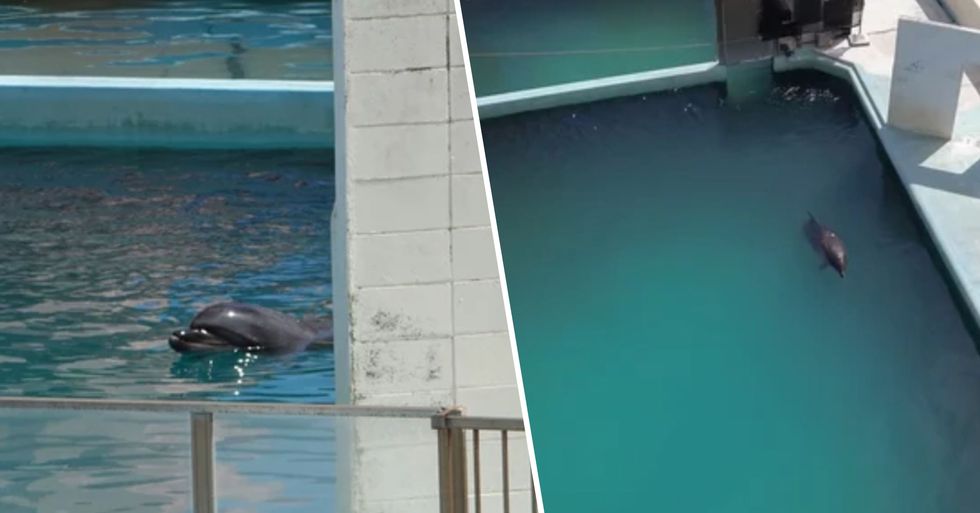 A dolphin named Honey, who was famous for being the "world's loneliest dolphin", has sadly died after spending 2 years by herself in an abandoned Japanese aquarium.

Keep scrolling to read more about Honey's unfortunate life, and just how authorities allowed this cruel treatment to go on for so long...

There's something undeniably quite distressing about seeing such intelligent and majestic creatures forced into chlorine tanks for the sole purpose to entertain and make money for humans. It's just wrong.

But, in 2013, people's attitudes on the matter were to change forever.

The documentary delved into the process of capturing young orcas from the wild...

And thus showed the disgraceful treatment of all marine mammals once they are in captivity - This includes brutal training techniques, the forced separation of mothers from their calves, and even showed how staff lock up their animals in tiny, blacked-out boxes every single night.

And, shortly after the documentary's release, people instantly turned against Sea World, with even more calling to boycott the company.

More and more people are turning against the company who, despite 4 people having died at the hands of the distressed marine mammals, continue to train and perform their orcas and dolphins for profit.

Some progress has been made, however.

When will things change?

Sadly, we are quite far off from bringing a full end to the cruel captivity of these beautiful creatures and, as a result, more and more heartbreaking stories continue to emerge about their suffering.

But the most recent story to emerge is even more devastating than usual.

A bottlenose dolphin named Honey has recently passed away after a solitary 2 years in an aquarium that was abandoned in 2018.

Honey was one of the many residents at Tokyo's Marine Park Aquarium...

But the park closed it's doors 2 years ago, therefore leaving Honey behind, along with forty-six penguins and hundreds of fish. One employee was reportedly tasked with feeding the remaining animals since the park was abandoned however, they mostly remained alone.

Shockingly, Honey was left to dwell in a tiny pool all by herself.

As the footage above shows, Honey's final 2 years were spent, completely alone and isolated, in this paltry concrete pool.

It is utterly heartbreaking to see.

Honey was forced to live out her final years in the desolate tank with virtually no stimulation or interaction with anyone or anything.

The animal welfare organization, Dolphin Project, flew a drone over her concrete home to capture images of her squalor...

And she can be seen, floating in a depressive and subdued state in the corner of the pool.

The Dolphin Project made many attempts to rescue poor Honey...

But their efforts were to no avail. On their website, they explained: "In late February of this year, we reached out to our Japanese colleagues once again in attempts to purchase Honey in order that she could be retired in peace and dignity."

Honey's health had been deteriorating for quite some time...

Which comes as no surprise after seeing the horrifying environment she had been living in. The Dolphin Project explained: "These conversations ended in early March when it became apparent Honey was unlikely to survive."

And, last month, Honey was finally freed from her underwater prison.

The organization confirmed that the dolphin had indeed passed away in her tank. "Later that month on March 29, Honey died in her tank." The only comfort we can take from this is that the poor creature has finally been put out of her suffering and misery.

You can see the full footage from Honey's bleak enclosure here.

Though be warned: It makes for a distressing watch.

But sadly, this isn't the only cause of cruel animal abandonment.

The organization explained: "Dolphin Project has encountered dolphins in the United States, South Korea, Haiti, Indonesia, Guatemala, Nicaragua, Colombia, and Brazil who were all in similar situations as Honey. In many instances, we were able to successfully rehabilitate and re-release these mammals." Rest in peace, Honey. For more on the devastating effects humans are having upon dolphins, keep scrolling...