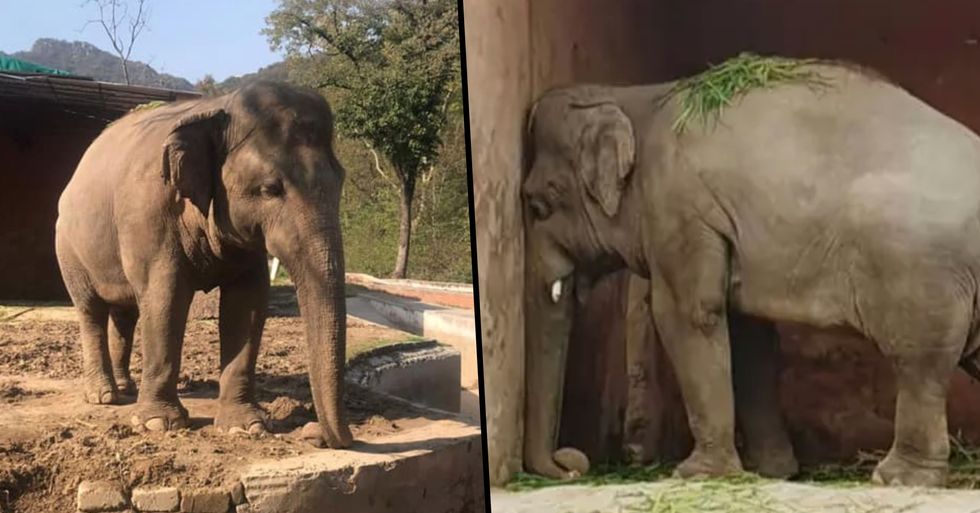 An Asian elephant dubbed the "world's loneliest elephant" has been held in captivity for the majority of his life, but that is all set to change over the next month.

Keep scrolling to see the photos for yourself...

With deep family roots and strong emotional bonds, they are far more superior than we give them credit for.

And they are very much loved and respected all across the continent.

As a result of human activity, the Asian elephant is now listed as endangered, with fewer than 50,000 left in both the wild and captivity.

The first is poaching - Like the African elephant, Asian elephants are relentlessly poached for their ivory tusks.

As urbanization, industrial development, and agricultural expansion increase in countries like India and Indonesia, Asian elephants’ habitats are shrinking rapidly.

Around 15,000 Asian elephants are currently living in captivity...

Whether they are being forced to perform...

Or used as novelty "rides" for tourists, these elephants are trained and often beaten into submission, which slowly chips away at their souls and characters.

And one elephant is finally being moved to a place he can live freely...

The move is set to take place next month.

After he spent 35 years shackled in a zoo, he will finally be able to live out his life at a new home.

For years, campaigners have petitioned to free Kaavan the elephant from Islamabad Zoo in Pakistan.

He was not only kept in chains but also showing symptoms of mental distress due to the enclosure.

After his only playmate died, Kaavan was inconsolable.

Activists even dubbed him the "world's loneliest elephant."

However, that all changed earlier this year after a court declared he should be freed and sent to a sanctuary.

Cher even got involved, expressing her joy for Kaavan finally being free.

Chief Justice, Athar Minallah was the one who ordered the release.

He said: "Neither are there adequate facilities nor resources to provide living conditions that would meet the behavioural, social and physiological needs of the animals."

The Pakistani government agreed on 17 July to let Free the Wild to relocate Kaavan to Cambodia.

Ammar Pervaiz - part of a local animal welfare group - tweeted: "Finally, Kaavan is going to Cambodia! I can't express how happy I am for Kaavan. Thank you to all the beautiful souls across the globe who raised their voice and showed their support especially IWMB and advocate Owais Awa."

Co-founder of Free the Wild, Gina Nelthorpe-Cowne, was ecstatic over the news.

"[We] are delighted by the news from Pakistan regarding the relocation and retirement of Kaavan, Pakistan's last remaining Asian elephant... after 5 years of relentless effort by Free the Wild and Team Kaavan."

Kaavan's health is currently being assessed, before applying for the permit to take him to his new home.

It's a lengthy process as Kaavan has to be trained "to enter his temporary transport crate until he is comfortable and familiar with it," which could take around a month to do.

This is such amazing news, and hopefully just one of many Elephants being relocated to sanctuaries.

Keep scrolling for more elephant news, and how tourists in Thailand are being urged not to ride the elephants...