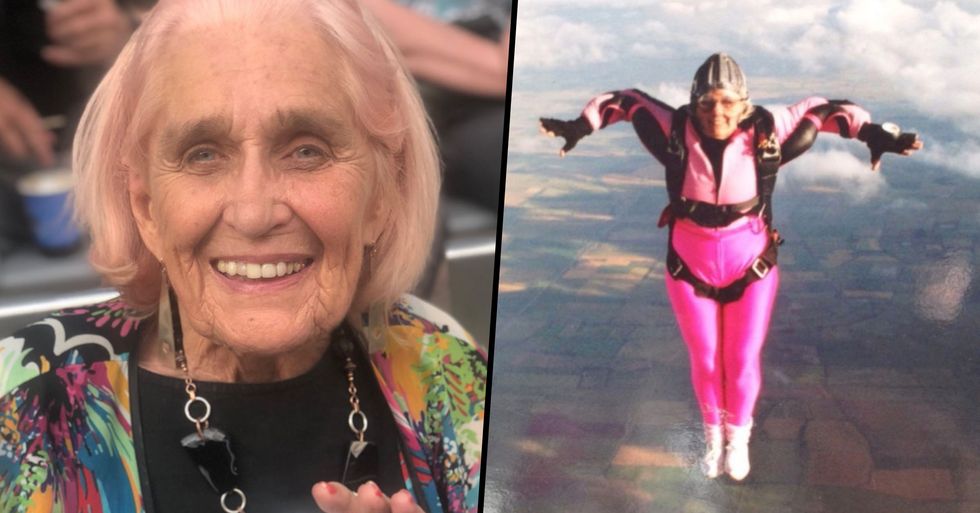 She was such an inspiring woman...

Dilys Price, the world's oldest skydiver, has passed away.

Hailing from Cardiff, in Wales, Dilys has always had a passion for working with children and individuals with special needs.

In the 1970s, she worked as a young Dance lecturer in the Cardiff College of Higher Education...

And she was brought in by the Inspectorate to help the development of education for those children previously seen as "uneducable", which led her to begin to focus on special needs schools of all types.

Dilys went on to work with special needs students in both schools and hospitals...

The inspiring woman went on to work alongside disabled children who wanted to pursue sports...

And she was a part of the team that built the Wales Sports Centre for the Disabled in the University of Wales Institute Cardiff (UWIC), which was a breakthrough for equality and respect based on the Illinois University model.

But Dilys wasn't finished there.

When she was fifty-four, she was going through a divorce and was raising her son which lead to a midlife crisis. Well, this midlife crisis turned out to be a blessing in disguise as it prompted Dilys to take part in a charity skydive.

Dilys was always afraid of heights...

But as she floated in the air, she said a fire inside her was sparked - and she was hooked.

She decided to travel to the United States to train how to skydive professionally...

She bought a trailer in Orlando, Florida, and later in Arizona - before going on to complete 1,139 solo skydives and parachute jumps all over the world.

But Dilys was no ordinary skydiver!

Her background in dance and choreography allowed her to specialize in air acrobatics and freestyling, with Dilys famously saying "you just feel so free".

At the age of eighty, Dilys set the Guinness World Record for the female oldest solo parachute jump...

A record that she proudly still holds and once did a staggering 28,000 ft jump, for which she needed to use oxygen. "When you have fun and do something that brings you joy, it motivates you to keep active," she said to the BBC of her passion, "I think a lot of older people don't have that and now I want to help older people to be active and to have a sense of self."

The passionate woman received many awards in her incredible life.

Alongside founding and setting up the Touch Trust charity that championed art and creative movement programs for young disabled people, she was awarded an OBE for services to people with special needs in 2003 and was honored for her work at the Pride of Britain awards in 2017.

Oh, and to make things even better...

All in all, Dilys was a woman who made so much of a difference...

Which is what makes the news of her passing even harder to take in.

The news came in on Friday evening that Dilys has died at the age of eighty-eight.

Of course, people have been left shaken by the news, and floods of wonderful tributes have come in for this remarkable woman.

We have heard sad news that one of our best loved speakers Dilys Price has passed away. Founder of Touch Trust, ol… https://t.co/NFl2I4KHpc
— Superwoman Network (@Superwoman Network)1602278071.0

How old would you be if you didn’t know how old you were? Dilys Price OBE set the Guinness World Record for the o… https://t.co/6WhjzTIgw1
— That Cardiff Girl (@That Cardiff Girl)1602403558.0

@cardiffmet @HDWilch A true inspiration to all the students she taught @cardiffmet (in former iterations) and so ma… https://t.co/lHS8VbsfmQ
— Ian Gardner (@Ian Gardner)1602277048.0

@cardiffmet So sad to hear this. My son benefitted from some lovely sessions at the Touch Trust. I later met Dilys… https://t.co/hPd8osWcHC
— Amy Cole (@Amy Cole)1602274353.0

Her death was announced on her Facebook page by close family members.

The post wrote: "Dilys Price died peacefully after a short illness on Friday 9th October, 2020. Mum/Mamgu was calm and joyous throughout the time of her passing and always made clear to everyone that she was happy and at peace."