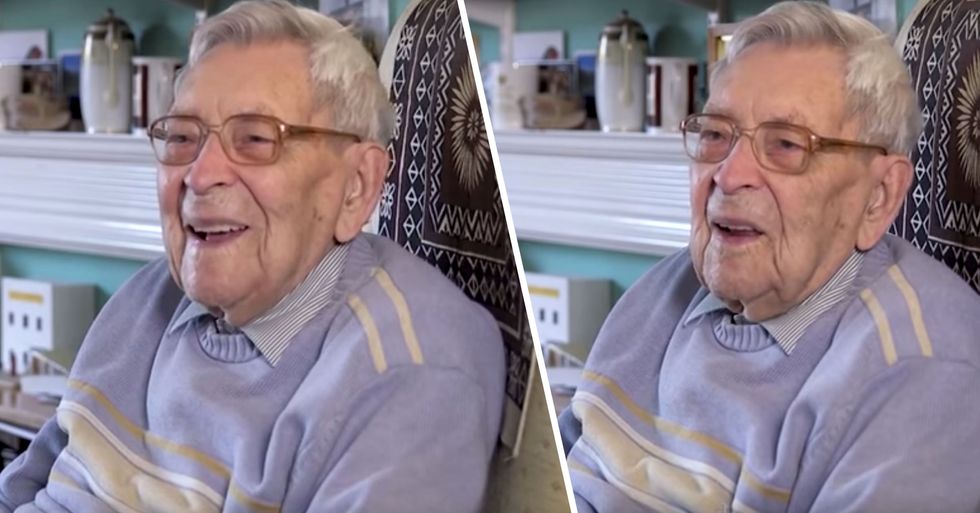 It's inevitable that death awaits us all... but when exactly is always the question.

The oldest man in the world has just broken records by celebrating yet another birthday.

Keep scrolling to find out about this extraordinary man...

We all find ourselves asking that universal question...

When will we die?

But the answer is...

Nobody knows when their inevitable death will greet them.

But death shouldn't be a thing to be feared...

And it is no secret that some people will go on to live extremely long lives.

These people must have their secrets to their long lives...

Because they're certainly doing something right!

And many have taken the title over the years of being the oldest person in the world.

But the current title-holder for the world's oldest person is Bob Wighton...

Happy 112th birthday Bob Weighton! The world's oldest man will be spending his birthday in his apartment at Brendon… https://t.co/OFdvcEHy4U
— Brendoncare (@Brendoncare)1585472548.0

And he has just celebrated his 112th birthday... a world record.

Bob entered the world on March the 29th, 1908 in East Yorkshire of the United Kingdom.

King Edward VII was still reigning over Britain, while Herbert Asquith’s tenure as Prime Minister was soon to begin.

Bob has lived an incredible life.

After studying mechanical engineering, he traveled the world, living in Taiwan, Canada, and the U.S. before returning to England in 1946 with his wife Agnes and their 3 children.

He now has 10 grandchildren...

And a whopping twenty-five great-grandchildren. Now that's a big family.

Bob's birthday has played a host to a number of major events throughout history...

He read the headlines as Adolf Hitler’s vice grip of Germany’s population solidified when he received ninety-nine percent of the votes in the country’s election.

And fast-forward to his sixty-fifth birthday...

On a much lighter note...

Bob’s 106th birthday in 2014 matched up with England and Wales’ first same-sex marriages.

Of course, a lot of people have one burning question for Bob...

What is your secret to living to such an incredible age?! Speaking to BBC News, Bob said, "I just accept it as a fact. It’s not something I ever intended, wanted or worked for but it’s just one of those facts of life. You might find it amazing but it’s just one of those things. I have not lived my life avoiding being run over by buses or getting cancer or anything else. I’ve done nothing to deserve or achieve this age. I’m just one of the lucky ones."

Bob has lived through 5 monarchs, twenty-two prime ministers, 2 world wars, Spanish flu, and smallpox... meaning he is more than prepared for the coronavirus pandemic which ultimately lead to his birthday party being canceled.

He is a truly remarkable man.

Happy birthday, Bob! Make sure to keep scrolling to learn about the 101-year-old man whos birthday party was canceled thanks to the coronavirus pandemic...