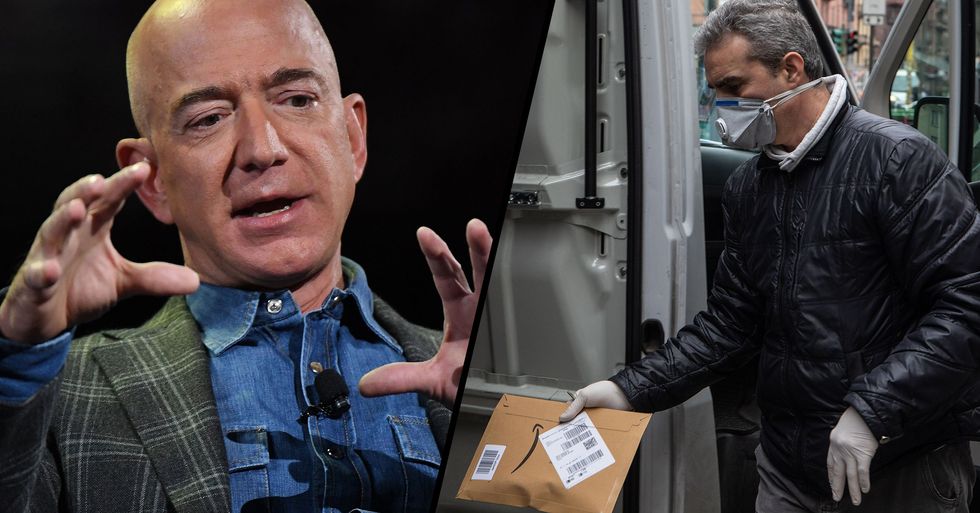 Even though Jeff Bezos is the wealthiest man in the world, he appears to be struggling during this global pandemic just as much as the rest of us.

The multi-billionaire is even asking the public to step in and do something totally bizarre for his employees.

Keep scrolling to find out about his ludicrous request...

Bezos is a multi-billionaire... I didn't even think they existed.

Nobody is born with a net worth of over $100 billion, some of us are only given a small loan of one million dollars... So where did it all start?

During this global pandemic, he's really shown his true colors.

He's been criticized by the public on social media after setting up a relief fund which the public can donate to for his employees that are working during the outbreak.

The Amazon Relief Fund was set up to assist "employees and partners."

It was created with twenty-five-million dollars from the e-commerce company to help those who are responsible for delivering goods across America.

"Supporting our US-based Delivery Associates employed by Delivery Service Providers, our Amazon Flex Delivery Partners, and Associates working for Integrity Staffing, Adecco Staffing, and RES Staffing, and drivers and support team members of line haul partners under financial distress due to a Covid-19 diagnosis or quarantine."

The company did contribute a fair amount to the fund.

Reminder that Jeff Bezos sold $4 BILLION worth of Amazon stock at the beginning of February 2020 https://t.co/wz8EegiVXK
— Billionaires (@Billionaires)1585075742.0

But the company wrote on the fund's website: "While we aren’t expecting anyone to do so, you can make a voluntary donation to the fund if you desire to do so."

However, before changing the wording, they encouraged people to donate by text.

Understandably the relief fund attracted a lot of backlash online. One Twitter user wrote: "How is your company worth over a TRILLION dollars and you want the public to donate to an employee relief fund?! As if Amazon can’t pay their employees themselves."

"Jeff Bezos makes 9 million dollars every hour. He can take an evening nap and make more than you will in your entire lifetime. Amazon hasn't paid federal taxes in years. But he wants you to donate so Amazon workers can take sick leave."

A spokesperson for Amazon had this to say...

"We are not and have not asked for donations and the Amazon Relief Fund has been funded by Amazon with an initial donation of $25 million. The structure to operate a fund like this, which hundreds of companies do through the same third-party, requires the program to be open to public contributions but we are not soliciting those contributions in any way."

Up to 2 weeks sick leave would be provided to "all Amazon employees diagnosed with Covid-19 or placed into quarantine."

But all this changed on Monday.

Amazon said it would extend its sick leave to those who work twenty hours or more, but those who don't aren't covered and have been encouraged to apply for the Amazon Relief Fund. Just to reiterate, Bezos is worth $114 billion, making him the world's richest man. If you are currently stuck inside, why not check out what Netflix has lined up for us in April. We're in for a treat...