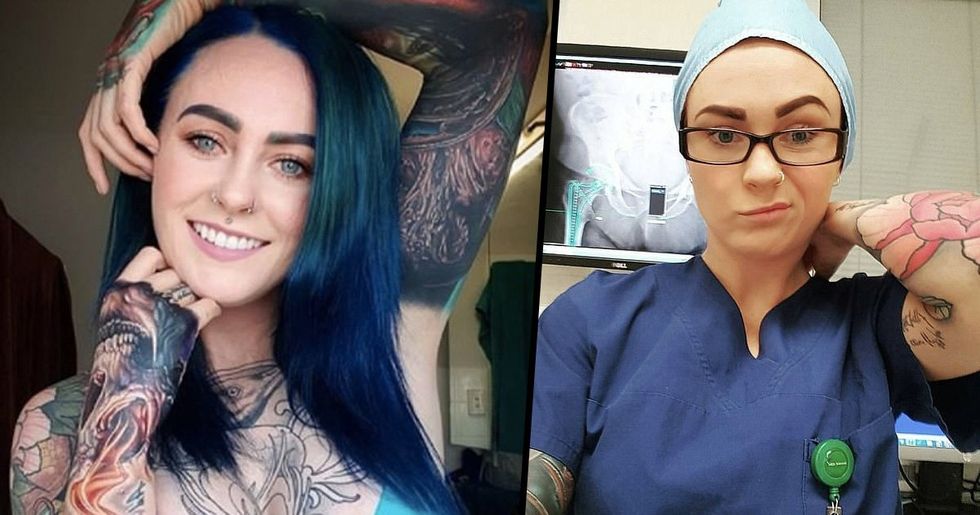 In this world there are many ways with which a person may face prejudice. For example, some are discriminated against because of their race, others their sexuality and some their gender identity. And I'm sure we're all agreed that in 2018, there is absolutely no place for this in society.

Discrimination can also be aimed at things such as hair color, eye color and sometimes even the way you choose to dress and personalize your own body. This is something that 30 year-old Sarah Gray has recently spoken out about to the media.

30 year-old Sarah Gray lives in Adelaide, Australia, where she is a doctor and trainee surgeon. She also has tattoos covering almost every inch of her body.

She has always had a passion for body art

From a very young age, Sarah has been fascinated by tattoos and body art and happily received her first tattoo at the age of 16.

And she loves her ink

She adores every single drop of ink that lines her body. On a side note, she also has some flawless hair.

Sarah has also been considered a positive figure within the tattoo community, because of her confidence and strength.

She even jokes that she is ‘the world’s most tattooed doctor’.

But with all this, she still has been met with adversity

However, Sarah’s positive outlook and confident appearance has not exempted her from her fair share of adversity and scrutiny.

When talking about her experiences, Sarah likened them to experiences of Julia Roberts’s character from the film Pretty Woman.

Like Roberts’s character Vivian, Sarah has been ignored by shop assistants in high end stores.

One time, Sarah was looking for a pair of designer heels for her birthday (which she obviously adores) and three separate shops completely ignored her when she wanted the correct size.

Wouldn’t even look at her

As Sarah told Daily Mail Australia, ‘They served all the other customers first and wouldn’t even make eye contact with me.’

How rude can you be?

After all, they’re only tattoos!

However in that case, Sarah could see the silver lining.

'I waited politely for ages and eventually gave up and left. They did themselves out of a sale and I saved myself $1,000, so I guess that one’s a bonus.’

‘I was out for lunch in a restaurant with my partner on the Gold Coast when we were seated at a table.’

Wait until you hear this

‘After being seated for lunch, management then came up to us and asked us to leave as they had a ‘no visible tattoo policy’ for diners. That was a little disappointing to say the least.’

Sarah and her friends have faced similar situations before

One time after an art expo, Sarah and her friends were denied entry to a casino because of their body art.

‘Quite a few night venues seems to have this policy and although it doesn’t affect me very often as I hardly go out, it can be super frustrating when we get categorised as “bad people" or being gang affiliated due to our colourful skin.’

Sarah did not expect to become a walking art piece

Originally, Sarah had only planned to have a few small tattoos and maybe a large scale piece for her back.

But now she’s a living rainbow

But now she has a tattoo body suit, which Sarah considers to be her own art collection, except she collects the art on her skin.

And the tattoo process doesn’t hurt her at all

Sarah doesn’t even mind the inking process. Even being able to sit in a tattoo parlour chair for up to 12 hours in one session.

And she doesn’t consider herself a tattoo addict

‘I think it is possible to catch the “tattoo bug" where you start with one piece and find yourself drawn to wanting more.’ But she also admitted that she is not reliant on the tattoos and can stop at anytime.

Sarah even believes that tattoos are great ways to personalise yourself and your body. Making it completely your own.

Her tattoos have even given her confidence in her body, and she loves showing off her impressive collection.

Sarah admits to not knowing how many tattoos she has, as they all blend into one cohesive piece. Nor do many of them have meanings, as some are pieces collected from artists’ that Sarah admired. However, some of them do hold special meanings. As Sarah stated: ‘Some of them signify times in my life or things that are special to me, like my career, my Vegas wedding, my love of skulls and all things horror.’

She even stated that one of her tattoos signifies her love of cheese.

And who doesn’t love cheese?

Sarah also sees each tattoo as a sign of positivity.

Through the community she met her soul mate, she has gained many good friends all over the world and she is a positive image for the community, all of which wouldn’t be the case if she never got that first tattoo.

However, she did worry how her tattoos would affect her medical career

When first starting medical school, Sarah feared that her art collection would hold her back, or lower her in the perception of her patients and co-workers.

But that was not the case

As she discovered that attitudes towards tattoos are not always what they used to be.

As Sarah herself said:

‘Having colourful skin in no way affects your skill level and with all the anti-discrimination laws now it wouldn’t be appropriate to compartmentalise or treat me differently based on my appearance.’

Sarah, we all agree

I think we can all get behind Sarah’s message here. Not only is she a walking work of art, but she is also a confident and intelligent woman. Sarah you rock.