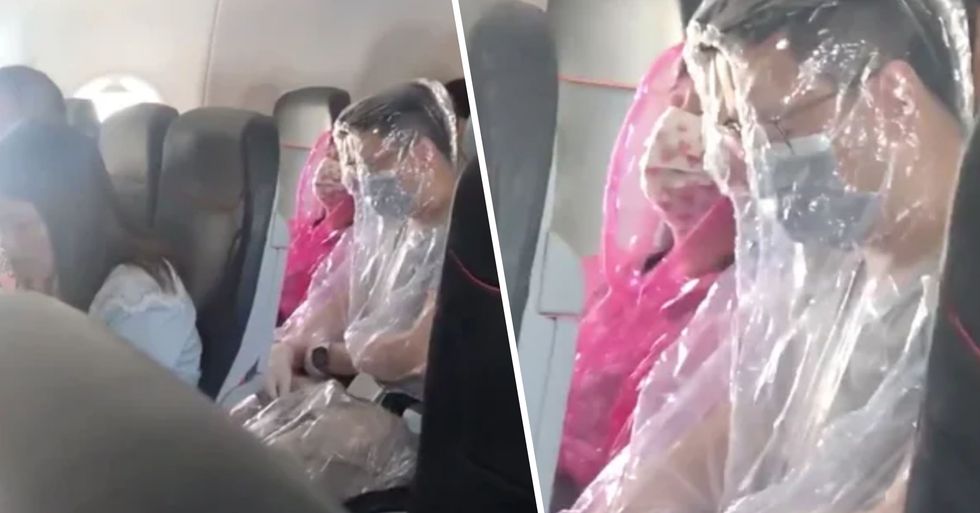 Amid the global panic that is the coronavirus, travelers have been going to some rather drastic lengths to protect themselves from infection... Including wrapping their entire bodies in plastic.

Keep scrolling to see the rather ridiculous health and safety precautions taken by these frenzied passengers...

We are in the middle of a medical crisis.

Originating from the Chinese city of Wuhan, a deadly virus known as the coronavirus has been spreading across the globe at an alarming rate.

It has been confirmed by CNN that over 2,000 people have now died, with the majority being in mainland China. A further 750,000 have been infected across the globe.

The virus continues to rapidly spread, and traces of the disease have already been discovered and confirmed in several other countries including the United Kingdom, Thailand, South Korea, Taiwan, Saudi Arabia, and Japan.

And cases have now been confirmed here in the U.S.

There are currently twenty-nine active cases being monitored here in America, according to the New York Times.

What actually caused this deadly virus?

And many have been eating the bats whole without properly preparing or cooking them. What is wrong with the world?

But, despite generous donations made to the cause, they have been short of any luck.

People all around the world are starting to panic.

And many have been taking matters into their own hands to protect themselves from the virus.

Most are opting for face masks.

The face mask has long been a trusty method of avoiding illness across Asia, and most seem to be sticking with this tactic in the latest crisis.

But others are taking things a little bit too far...

Various travelers have been spotted going to extreme lengths to avoid catching the virus… Including this woman who, rather foolishly and rather dangerously, put a giant plastic bag over her head.

An entire family was captured, standing patiently in a check-in queue, while all wearing giant plastic bags that covered their heads and torsos.

And some have opted for plastic bottles.

A woman and her child were seen walking casually through the airport… While wearing massive plastic bottles over their upper bodies.

Oh, and we can't be forgetting the animals, now.

It is currently unknown as to whereabouts in China this photograph was taken, but this poor cat has clearly been forced to wear a makeshift face mask in the street. I've seen it all now.

But, out of all the ridiculousness of this situation...

Only one person can take the crown... Or two, in this instance.

Here they are, ladies and gentlemen.

No, your eyes are not deceiving you.

The couple can be seen sitting, safely strapped into their seats, while fully covered in plastic.

It's all rather ridiculous.

But hey, as long as they feel safe, right?