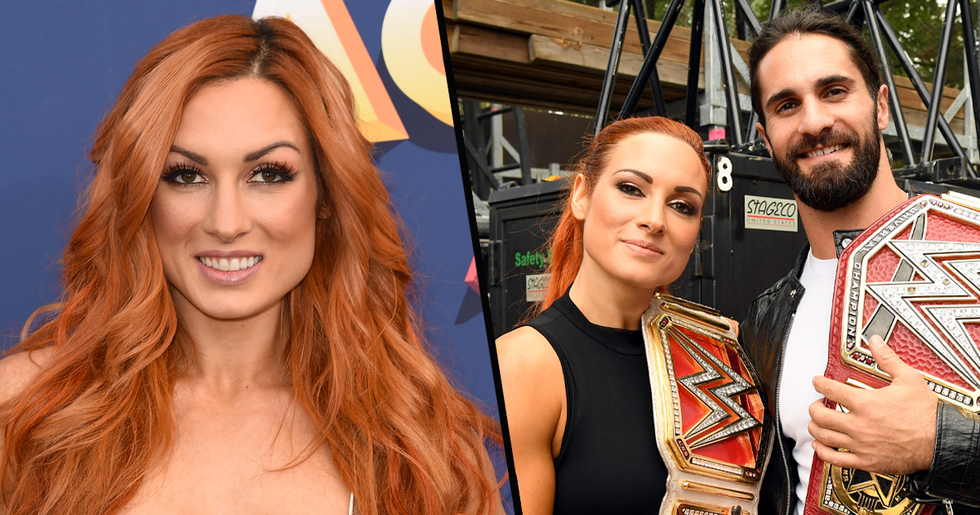 We all know and love Becky Lynch for her career as a professional wrestler...

And it's undeniable that she is one of the most bad-ass women in the world of WWE.

But she wasn't born as Becky Lynch...

Born as Rebecca Quin in Ireland, the thirty-three-year-old grew up near Dublin in a normal family environment.

She was introduced to sport from a young age...

She started watching professional wrestling with her big brother as a little girl, and she also took part in sports such as swimming, basketball, and horse riding.

But she soon realized that this life wasn't for her, and she dropped out shortly after enrolling.

Her golden opportunity was just around the corner...

When she was a teenager, she heard that Fergal Devitt and Paul Tracey were opening a wrestling school in Ireland.

She began training there along with her brother in June 2002.

She then went on to join the Canadian promotion, SuperGirls Wrestling.

Following her arrival at a show in Surrey, British Columbia, Becky feuded with Miss Chevius and defeated her, but lost to her in Port Coquitlam a month later. The following night, she teamed with Calum Macbeth to defeat Miss Chevius and Tony Tisoy in a mixed tag team match in Vancouver.

Over the next few years, Becky went on to make quite a name for herself in the wrestling world...

She held the World Queens of Chaos Championship for a few months and participated in countless fights.

But in September 2006, while wrestling in Germany...

Becky sustained a serious head injury, which she claimed to have been "suffering from extremely painful headaches, loud buzzing in her left ear and vision as a result," and was also diagnosed with possible damage to her eighth cranial nerve.

Following her injury, the wrestler took a 6-year hiatus...

And this ultimately led to a downward spiral of depression. Speaking to SportsKeeda about this traumatic time, she recalled: "All of a sudden, I was just lost with no goals, no ambition. I felt like I let everybody down. And I was so ashamed. I just remember pure shame, of not being able to know what I was going to do with myself, not being able to own up to the fact that I wasn't doing it, or that I was confused about it."

Her lifelong goal was to make it into WWE...

And little did she know what was around the corner.

In 2013, Becky signed a two-year developmental deal with WWE...

And this birthed the Becky Lynch that we all know and love today.

She made her televised in-ring debut on 26 June 2014 episode of NXT, defeating Summer Rae, and the next week, Becky teamed up with Bayley in a losing effort to the BFFs: Beautiful Fierce Females.

She has moved further and further up the wrestling ladder since her huge come-back...

And she is now dubbed as "The Man" which started at SummerSlam in 2018 when she attacked Charlotte Flair - bringing out a much more aggressive character.

Becky's success truly goes to show that anything can be achieved if you put your mind to it...

And she now seems to be living her best life alongside her fiance and fellow wrestler, Colby Lopez - who is known professionally as Seth Rollins.

The couple has been engaged for over a year now...

And Becky recently unveiled some amazing news... live on TV.

Becky appeared on Monday night's RAW, just days after she broke the record for most days as Raw Women’s Champion.

She also revealed that after speaking with WWE officials, the Women’s Money in the Bank Ladder Match was actually for her title, instead of the usual contract for a title opportunity. Therefore, Asuka is now the champion.

"Tonight is no ordinary night for me," she said. "I'm torn between joy and sadness, 'cause I'm at a place in my life where things are about to change and I needed to do something about it."

Then, turning to Asuka, she said, "You go and be a warrior, 'cause I'm gonna go be a mother." Now that's the proper way of announcing a pregnancy!

Asuka embraces the mom-to-be and congratulates her...

And she wasn't the only one to do this!

Fans and colleagues were quick to send in their congratulations to the happy couple...

And of course, light-hearted jokes were made in the wrestling community.

Fans have expressed how much they will miss Becky...

But there's no doubt that one day, she'll be back in the ring doing what she does best.

Congratulations to both Becky and Colby!