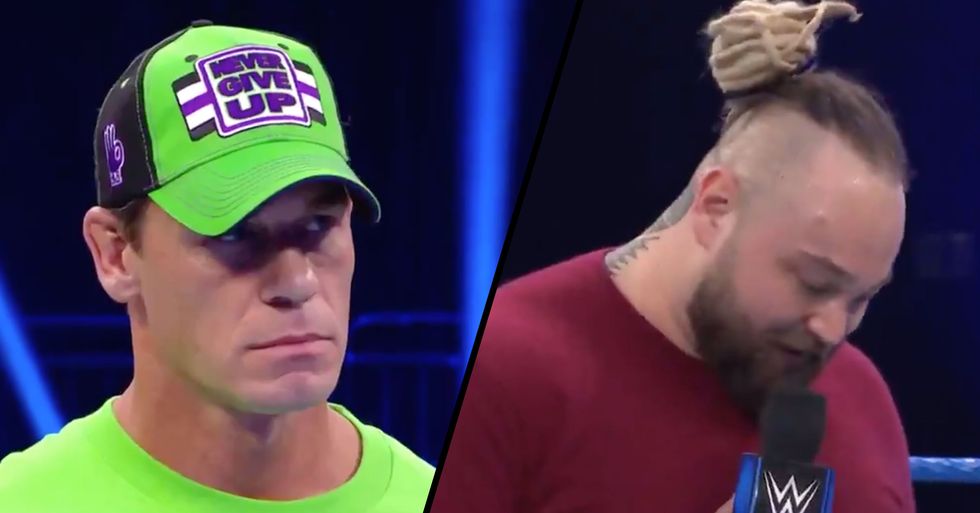 One of the biggest events in the sporting calendar has been heavily impacted by the coronavirus. With the fear that it could prove to be a breeding ground, the WWE has decided to place a strict ban on fans being in the arena during Wrestlemania 36. The decision comes after the President declared the disease to be a national emergency. However, the show must go on, but the lead-up segments on Friday Night Smackdown have just proved how important audiences are for wrestling events.

Keep scrolling for the video of John Cena and The Fiend trash-talking each other in an empty arena and try not to cringe while watching it...

Now almost 200,000 people all over the world have now been infected with the virus...

184,037, to be precise. And, devastatingly, a staggering 7,182 more have been reported to have died from the illness.

The attempts to contain the virus were to little avail.

Because, fast forward 3 months, and nearly every major country in the world has been infected by the virus, with some of the worst affected being Japan, South Korea, Italy, Iran, and Spain.

Which prohibits any travel between the United States and any European country, including the United Kingdom and Ireland. But since flights have been heavily disrupted because of this virus, it doesn't seem like that's going to be a problem right now.

Yep, things are beyond serious.

And many people have been descending into mass hysteria over the risks the virus brings with it but it's important to remain calm in these sorts of situations. Think about things rationally, and we'll make it through this.

However, one of the biggest American events of the year is going to suffer tremendously from the outbreak...

WWE's all-star event, Wrestlemania 36 will be impacted by the coronavirus, as it has recently been announced that even though the event will go ahead, there won't be any fans allowed in the arena.

The event has been moved from Tampa to WWE's Performance Center in Orlando.

The original venue, which was set to hold thousands upon thousands of excited fans has been switched to a much smaller and intimate training venue.

And even then, no fans will be allowed in the center.

The WWE has always placed extra emphasis on how important the fans are when it comes to matches, how they motivate the performers with their chants and their boos, and we've never seen any matches without a magnificent live audience.

One of the main events taking place is the match between living-legend John Cena, who recently came out of his part-timer role, and Bray Wyatt, AKA The Fiend.

Fans had been anticipating the match as the company had spent the past few months building on their rivalry.

But after seeing their promo segment on Smackdown, which featured only the two wrestlers, two chairs (that they didn't use) and two microphones, we couldn't help but cringe and wish it was all over.

It was such a cringe moment. They both talked as if there was an audience listening to them and when they took their pauses to hear fan reactions, but all there was the faint sound of crickets to replace them, they felt the humiliation of their segment.

They have truly taken "the show must go on" to another level.

Other main-event matches include Drew McIntyre taking on the Beast, Brock Lesnar for the WWE Championship and on the night it is rumored that McIntyre will gain the biggest win in his career, there won't be an eye in the arena to witness it.

However, the event is set to take place on April 5th exclusively on the WWE Network.

But let it be known, what was supposed to be the biggest event in the wrestling calendar has been reduced to what the reality is: Two muscly guys fighting in an empty room in their underwear. Yikes. Keep scrolling to see what other areas of the entertainment industry have been affected by COVID-19.