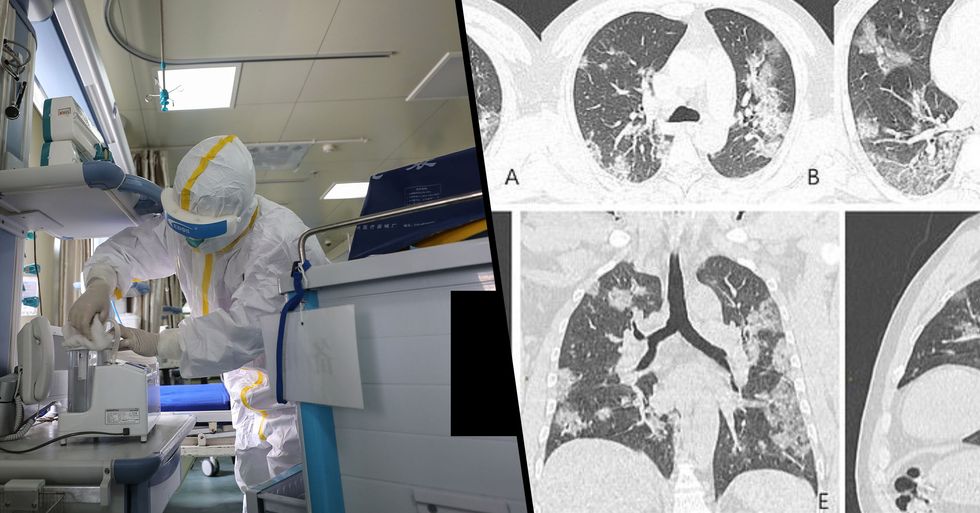 X-Ray Images Show the Impact of Coronavirus on Victim's Lungs

Hundreds of thousands are currently infected with the virus and now, even more panic has been spread after X-Ray images have been released of a coronavirus patient's lungs.

This means that things are getting serious...

And perhaps we may have underestimated the strength of this virus.

X-rays of the lungs of a patient who had coronavirus have just been released...

The unnamed Chinese man, who was forty-four, has now passed away from the virus and the Radiological Society of North America has decided to release these images to demonstrate the impact of the virus.

It is believed the man worked at the Wuhan seafood market...

He was admitted to hospital on Christmas Day in 2019 after he had been suffering from a fever and cough for nearly 2 weeks. Doctors later diagnosed the man with pneumonia and acute respiratory distress syndrome until he sadly died a week later.

The damage is very visible...

via: Radiological Society of North America

As per the Daily Mail, the scans show white patches in the lower corners of the patient's lungs, which indicates what radiologists refer to as "ground-glass opacity" - the partial filling of air spaces. These abnormalities are similar to those found in patients suffering from SARS (severe acute respiratory syndrome) and MERS (Middle East respiratory syndrome).

The virus spread rapidly through this poor man's lungs...

via: Radiological Society of North America

The scans proceed to show how the fluid in the spaces of the man's lungs became more pronounced over time - as evident when comparing image A to image F.

This shows not only the severity of the virus...

It also demonstrates how quickly the virus can spread through a person's body - meaning anybody who is infected must seek treatment as quickly as possible.

Make sure to stay posted for further updates.
20%