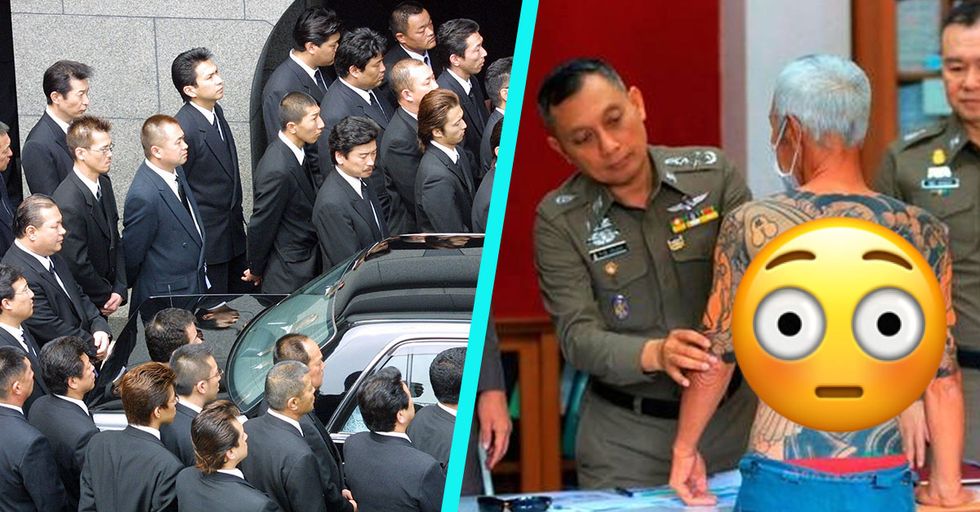 Our parents often warn us of just how permanent tattoos can be, but most of us don't think twice about the cliche butterfly we got on our eighteenth birthday or the super meaningful movie quote on our back. Plus, millions of people have tattoos, and they've been around for hundreds and hundreds of years.

But for one man on the run for the last fifteen years, his tattoos are ultimately the reason he got caught by the authorities. Maybe he should have listened to his parents after all!

Thai police recently reported that they arrested a 74-year-old man after photos of his tattoos went viral on Facebook.

According to CBS news, the man was Shigerharu Shirai, and he was arrested in Bangkok on Wednesday. Shirai had been hiding there for 10+ years.

He was evading murder charges in Japan.

Apparently, his arrest came after photos of him sitting in a park playing checkers starting circulating online. The photo was posted last August and shared over 10,000 times.

Over the last decade or so, Shirai has kept a low profile.

He's married to a Thai woman, and several times a year Japanese associates visit him bringing "cash gifts." In the police statement it explains that Shirai will be handed over to Japanese authorities and face "illegal entry charges."

Shirai did not operate alone.

Shirai was involved with the murder of Kazuhiko Otobe as well as seven others. The case is 15 years old.

Both Shirai and Otobe were members of groups associated with the Yamaguchi-gumi.

There are several trademarks of the yakuza.

The most visible of these trademarks are the intricate tattoos on the upper back and arms as well as missing tips of the little finger. "Tattooed guests are often refused entry to public baths and swimming pools," CBS news reported.

Shirai was arrested while he was shopping in a market.

The photos that had been circulating online not only showed his tell-tale tattoos, but also the missing tip of his finger. People online started to recognize the man.

A Thai police spokesman gave a statement after the arrest.

"The suspect admitted he was the leader of the yakuza sub-gang Kodokai," said Gen Wirachai Songmetta. The yakuza differs from other organized crime, like the Italian mafia, for instance. They're not illegal groups, and often times operate right in view of police. Even if their means of keeping order on the streets is extreme, it's technically not illegal for them to exist.

Organized crime groups are still present to this day.

The National Police Agency reported that there were 22 organized crime groups as of 2017. There are around 20,000 members total across the groups.

Since Shirai entered Thailand illegally, he will be extradited.

Lately, viral photos and videos seem to have lead to more and more arrests. Shirai will face prosecution in Japan.