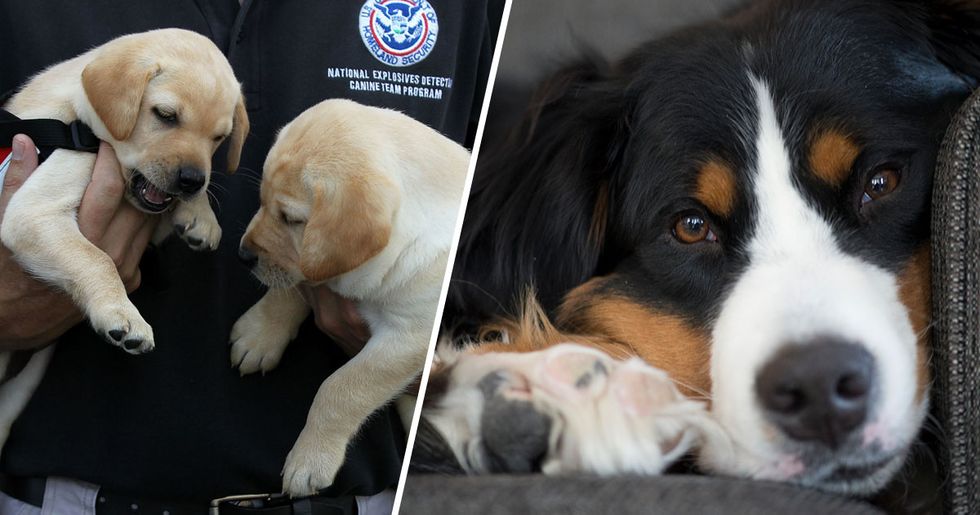 Normally, people are put off adopting pets because they don't know where they've come from.

It might sound bad, but it's true that adopting a dog comes with risks. You can't know for sure how the previous owner treated the pet. A dog that has suffered trauma can lash out and cause harm.

A pup that's had a distressing start in life might struggle to follow basic training. I mean, no one wants a Great Dane relieving itself on the good rug every time that it hears the door go... but it's better to adopt, right?

Service dogs can quite literally jump through hoops.

If you ever wanted a dog that you could show off to your friends, a service dog is it. And the best part? You never even had to do anything! No trips to the dog trainer, no pleading with it to sit while you put on its lead, no discovering poops under the couch...

Service dogs are trained to go into serious situations.

These dogs are sent into crime scenes, hostage situations. Imagine, it'd be like having your own, real-life Scooby-Doo. You could become a one-man-and-his-dog vigilante team!

When the prospect of getting a regular dog is filled with possibilities like "long walks" and "fetch," just imagine what you could get up to with a super dog!

They'll be no match to your faithful companion who is trained to protect you at all costs. In this picture, we can see exactly what goes down during the training. Tokyo Metropolitan Police Department got a member of their force to impersonate a criminal - and, from the looks of it, this service dog took down the bad guy effectively!

Service dogs get specialist sniff training. Can't remember which luggage case you left your suncream in? I'm sure your ex-service dog will be able to figure it out. Not sure if the guy you're dating is a wrong-un or not? Let your dog give him a sniff and you'll soon find out!

A helpful hand around the house.

You might think that getting a dog would mean a lot of work on your part. You have to feed it, clean up after it, wipe its muddy paw prints from all of your clean floors... Well, you could be surprised to find that, by adopting a service dog, they could help you out. Who wants to do the dishes?... Rex?

Are you old and lonely? Do people switch off when you start talking? Do your kids put their phone away from their ears when you start jabbering on about the good old days? Well, go down and adopt yourself an ex-service dog. These dogs were trained to listen. Better yet, the dogs that were "too nice" for the job are the ones that won't skulk off because they're bored - these are the ones that will hang off your every word.

Why can't service dogs be nice?

I mean, sure, it sounds a bit weird, right? But there is some serious logic in why a government trained dog can't be overly nice. Just like the officers that they're with, service dogs need to keep an air of professionalism. I mean, they can't be sniffing a crowd for drugs if they're too busy getting their belly rubbed by every passer-by.

It might seem harsh, but these dogs need to be vigilant.

The job of a service dog is a whole lot more than sniffing bags as people go into a gig. These highly trained K-9s are sent out into war zones, they're sent to natural disasters... these are the guys that are sent in first. In situations of this scale, there's one thing that a service dog needs to be, and that's focused. In the picture above, we see a rescuer and his service dog taking a rest after pulling out survivors of an earthquake in Ecuador that killed 350 people and destroyed an entire town.

"Not right now, this picture is for our official Twitter page!"

Whether it's staying focused on the beat or refraining from licking their partner whilst getting a serious photo, service dogs have to do a lot to make the cut.

But it's not all down to the pooch.

One of the main problems that service dogs face is that humans seem to not respect them as the professionals that they are. These dogs have a job to do and it's made all the harder when the general public feels compelled to pet them. As Twitter user, Jessica Manor, found out: You're not supposed to pet police dogs.

Some people don't seem to have gotten the memo...

It seems as though the rule to leave police dogs alone hasn't gotten through to a lot of the general public. Plenty of people appear to be blissfully unaware that it is not okay.

And some people are getting away with it?

The thing is, a qualified service dog is a tough cookie.

These dogs don't take any prisoners... or, I guess, no, that's exactly what they do. What I'm saying is, if you met one of these qualified service dogs down a dark alley and you gave off a suspicious vibe, well, Lord help you. The last thing you want to be doing is trying to pet the darn thing. The rule about not petting service dogs is for your safety as much as theirs. If you want to keep all of your limbs, I'd advise staying clear. Heaven forbid, don't be rubbing your face in theirs - unless you have great health insurance and know a good rhinoplasty surgeon!

Don't be this girl.

Unless, of course, she's talking about an ex-police dog or a service dog that was too nice to qualify so has been put up for adoption.

Some dogs just aren't cut out for the world of drug dealers and crime scene investigations...

I mean, all that paperwork and those sleepless nights... some pooches are certainly more destined for the domestic sector, no matter how much training they've received.

But, as the saying goes... not all heroes wear capes, right?

I mean, someone's gotta stay home and watch the kids.

Don't underestimate the skill that it takes to watch a toddler and make sure that it doesn't crayon all over the walls. Could you think of anyone better than an ex-service dog that is trained in surveillance to watch your little one? And, hold up, before you start questioning whether it'd be safe, fear not! Remember... these dogs didn't make the cut because they were too nice. Ideal babysitter material.

Myself and Tracy from the internet are in unanimous agreement on this one. A pooch that flunked police school for being too nice is exactly what I need in my life.

Gavel is one of the many dogs that failed to pass their training because they were too nice for the job. He's up for adoption. Wondering where you can get your hands on an ex-service dog near you?

Get in touch with the TSA.

The TSA (Transportation Security Administration) has set up an adoption program for the dogs that failed to make the cut during training. It's here that you'll be able to get your hands on one of the nicest, most well-behaved, well-trained pooches on the planet.

You could also consider getting a retired service dog.

These canines have paid their dues and just want to retire off into the sunset. You'll find more well-behaved dogs here than anywhere else. If you're not up for a young pooch running around your place, this might be a better alternative. The organization, Mission K9, was set up to find homes for these brave American service-dogs. Their site is where you can get all of the info about how this scheme works.

Now this organization really is a cut above the rest. These guys train up dogs that are put in shelters to become service dogs. And the dogs that don't make the cut? Well, they find adoptive homes for those and they're more desirable than they were before because of all the training that they've received.

But, wait, before I sign up... what makes a dog not fit for service?

According to Freedom Service Dogs America: "Dogs can fail service training if they are easily distracted, have physical ailments, or are too timid for the line of work." Frankly, I feel as though that list perfectly describes me. I think that it's about time that I gave them a call and got myself a four-legged friend. (The pictured canine is called Cheddar... my heart, I want him!) If you want to read more about service dogs, keep scrolling. Next up we have a story about Canadian service dogs who had to watch a musical as part of their training. Cute right?!