Don't Tell Anyone, But Costco Is Selling a Bottomless Bucket of Mac n Cheese That Will Last The Rest of Your Life | 22 Words 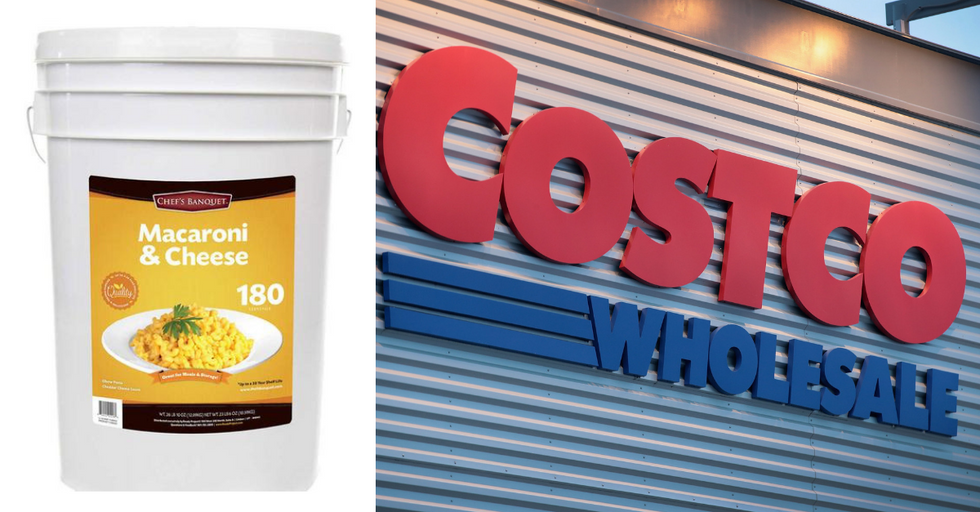 Don't Tell Anyone, But Costco Is Selling a Bottomless Bucket of Mac n Cheese That Will Last The Rest of Your Life

Well, Blade Runner predicted it. 2019 really is the year of the future. Forget flying cars and space colonies, 2019 will forever be remembered as the year that humans changed food forever.

Devastating natural disasters are just around the corner thanks to  Global Warming, so naturally, we're entering a time where emergency provisions are getting trendy. Hear that, avocado toast? There's a new food trend in town, and it's got a name: Giant Bucket of Mac n' Cheese. Sexy, I know.

So just where can you buy this cheesy, gooey, pasta-y abomination? I bet you already know. It's where anything large, inexpensive, and "how could anyone get through all this" is sold. Costco.

So now, here's the story of how you too can horde off a zombie apocalypse with nothing but a tub of the good stuff. Which coincidentally is what my girlfriend lovingly refers to my beer belly as.

Let's start at the very beginning.

Is that besides offering 401k benefits (which I've never had at any job), Costco also has a bunch of secret stuff online no one even knew about.

Do you know about all those stories of Uber drivers kidnapping their riders? Has anyone considered it was actually just tubs of Nutella people were kidnapping? Because if a 7 POUND TUB of Nutella got into my Uber, it would never see its family again.

It's real, and you can have it, and the entire thing is roughly 16,200 calories – which I'm pretty sure my doctor was exactly the right amount of calories I'm supposed to eat in a day. Again, don't quote me on that.

But we're not here for Nutella...

Even though maybe we should be. I'd marry Nutella. Got nothing else going for me.

We're here for this.

And this is really serious. So what's the deal Costco, when can I have this in my life?

But you might just have to wait for it.

First of all, how dare you? It seems like people are really catching on to this whole "drown my 2019 in cheese" thing.

But maybe you can start saving up for when it comes back in stock because this thing costs $90!

Which, I guess isn't a bad price considering that's like $.50 a serving. A box of Kraft isn't even that cheap. And check out those "features"! A 20-year shelf life. Oh, honey, that thing isn't lasting longer than 20 weeks.

And in case you're wondering, yes, it's yummy!

A 4.7 out of 5 stars for our new best friend? Let's read some reviews, how's that sound?

We bought this for our grandson. He was here the day it arrived. We opened it and made it. Very pleasantly surprised. I have made it a couple of different ways. You can't mess it up. Have purchased it again, and will continue to use it.

Yes, I recommend this product.
-MimiO

Honestly, I was expecting something that tasted horrible. I was surprised to find out that it was very good. But, don't pack the cheese sauce powder. -HealthTechSavvy I've got to admit that nothing about this product screams healthy or techie.

Ummm... not quite sure what they meant. Maybe they typed that just before slipping into a mac n cheese induced coma. I bought this item to make Mac and cheese whether I am at camp or home. -Blanche I would pretend to buy it for camping or emergencies, but honestly, I'd just eat it coming home drunk from the bars pretending I need nutrients to survive.

Oh, and by the way, this product being in such high demand might actually be a good thing.

You might be thinking to yourself, "why on earth would me not being able to get my grubby, mac-less hands on this bucket of freedom be a good thing?" and I hear you. But what I'm about to tell you might shock you. So hop off the toilet and go sit down on something real. I'll wait.

According to the USDA, there is currently a cheese surpluss in the United States.

First of all, I'm disappointed in all of you. How did we get to this point? I know 2016-2018 were tough years, but the fact that we've turned our backs on cheese is just embarrassing.

So shoutout to Costco

For Making America Eat Cheese Again. Btw I'm running in 2020 on cheese and no other policies. Pretty sure cheese is more important than immigration or health care, no matter which side you're on.

So what do other people think about this whole tub of mac n cheese thing?

Anyone out there got a hot-cheese-take? And not like the fondue kind, more like the Internet spice kind.

It seems like the Internet doesn't agree with me, as usual.

This is true! I forgot to consider the aftermath of something so gooey.

It also has practical applications.

@ElmaWoodBerg @people See, that I can get board with! We'll be able to survive the trump-ocolypse on Mac and cheese 😂😂
— MommaMarisa (@MommaMarisa)1547166947.0

A little late, but we'll accept it.

There's no bad time for this GIF of Mariah Carrey except on like December 26th when everyone is sick of it, so we decided to wait a couple weeks.

Again, a little behind schedule.

At least it'll last 20 years, so you won't have to worry about making it to November.

People are feeling a little wary.

Here's my take, though. Wouldn't you rather be eating 20-year-old mac n cheese during the apocalypse than 20-year-old anything else? Sorry Campbells, but I don't want your chunky stew that's been sitting on the shelf most of my life.

Again, some people are not about it.

And I get that. But those people are forgetting to consider that this is a bucket of mac n cheese and literally nothing could be better.

More for us then, @Milfsohard. You're not getting any mac n cheese with a username like that.

Jeanette, you sweet angel. Who let you on Twitter? Go back to accidentally texting your grandkids pictures of your kitchen floor.

This person gets it.

But also perfect for everyday life. I'm not backing down.

This is my exact reaction.

Shock, horror, but most of all, applause.

Some people don't even get it.

Because of 27 pounds of cheese and pasta, Bella. Maybe it's the Italian nature in me, but honestly name two better foods than cheese and pasta. And don't say bread, because pasta is basically just boiled bread. You know it's true.

Someone is stating the obvious.

We've known this for a long time. This mac is just a coping mechanism.

Our Costco, who art in warehouse, hallowed be thy pizza. Thy samples come, thy will be done, on earth as it is in heaven. Give us this day our daily 1L bottle of cheap vodka, and forgive us for running into people with your huge carts. As we forgive those who run into us. And lead us not into temptation, but deliver us from Sams Club. Amen.

That was my magnum opus. But we want to hear your thoughts!

Was it as gross as everyone else thinks, or as awesome as I think!? Hit us up in the comments, because we're always curious.