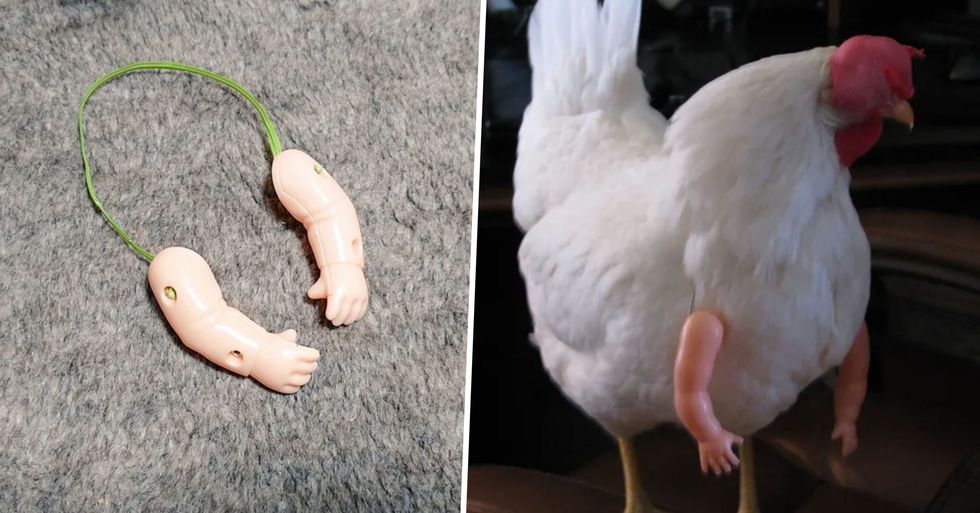 You Can Finally Buy Arms for Your Chicken

Well, the moment you've all been waiting for is here... you can finally buy arms for your pet chicken.

People have started showcasing pictures of their chickens wearing them and it's the best thing we've ever seen...

Pets are one of the many joys in life.

Whether you’re a cat or a dog person or prefer something a bit more exotic, having a pet is simply wonderful.

There isn't anything we wouldn't do for them.

Meaning many of us are often guilty of overly pampering our furry friends.

Some of us can't resist showering them in treats or toys.

Or even dress them up in clothes. Each to their own, right?

The internet is full of novelty pet-related gifts.

Those who want to spoil their pet really don't have far to look.

But what about when you don't have a generic pet?

Or more specifically,  what if you have a chicken?

More and more people now have chickens as pets.

And while it may be a more unconventional choice, they apparently make very good feathery companions.

The creatures are often overlooked...

But, they have a lot to offer, with many saying they are full of personality. Yep, really.

Not to mention the fact they produce eggs.

And act as a natural fertilizer, helping to kill off unwanted pests.

The positives are endless...

Brb while we go buy a pet chicken.

This week, a discovery on Etsy has had chicken owners going crazy.

Why? Well, because you can now buy arms for your pet chicken.

Yes, you read that correctly...

People are dressing their chickens up in "baby arms."

It requires a bit of DIY...

People are attaching a piece of wire to the set of baby arms and then putting them on their pet chickens to pull off a rather bizarre look.

People have been sharing images of the finished look on social media...

Unique is definitely a word we would use to describe it.

It's perhaps one of the most bizarre things we've seen.

But we kinda love it too...

Someone, at some point, clearly thought chickens with arms would be a good look.

But, it somehow made this chicken look rather macho.

They're even effective on the go...

What more could you want?

Some said they now want to buy a chicken just for the plastic arms...

During this extremely stressful time, it's comforting to know that my chicken now has arms. 🤪🤪🤪 https://t.co/PuN3xgEAaO
— Michael Schatman (@Michael Schatman)1595177738.0

"We are constant entertainment for the aliens," wrote one bamboozled user.

We don't even have the ability to be shocked by this.

Many said the arms made the chickens look "buff."

We can definitely see that.

Some were left all-out confused.

Why do chickens need arms, exactly? Anyway, if you're interested in more pet-related news like this, scroll on to check out the cookie cutters you can buy in the shape of your pet...