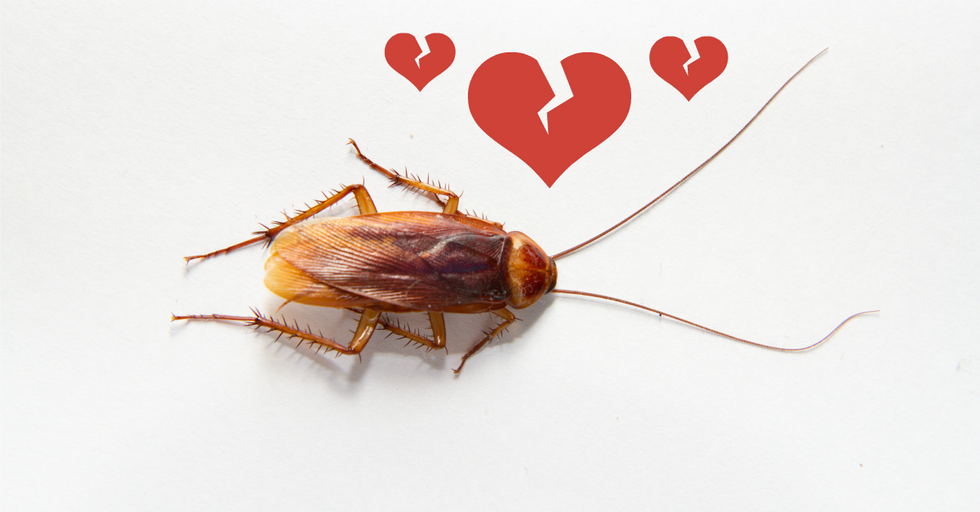 Valentine's Day can be an extremely tough holiday for both single people and those in long-term committed relationships. If you're seeing someone, the pressure to make some kind of over-the-top romantic gesture can be too much to bear, and it almost seems like whatever you do is the wrong choice that will result in an epic fight. And If you're single, February 14th can serve as a crushing reminder of how ridiculously alone you are, and if you've recently been dumped by a particularly horrid ex, it can be downright torturous.

Luckily, a zoo in the UK has come up with a way to spend V-Day that's so hilariously petty that you'll be telling everyone you know about it. Ready to get revenge on your not-so-significant other? Keep reading for all the delightfully disgusting details. This might end up being your best Valentine's Day ever.

Valentine's Day is just around the corner.

For some people, it's a perfect excuse to shower their significant other with presents, chocolates, romantic candlelit dinners and whatever else couples in love do.

But for those who aren't in a relationship, Valentine's Day can be a bit less magical.

In fact, it can be downright abhorrent. Who wants to have the reminder that you're single constantly shoved down your throat?

Plus, V-Day is basically the stupidest holiday ever.

It was created so that people would drop tons of money on chocolates and Valentine's Day cards for basically no reason. What, you can't be bothered to do something nice for your loved one the rest of the year? You need a dumb holiday to remind you?

And if you've recently been burned by a (now ex) lover, Valentine's Day is basically torture.

You and your ex probably had some big plans for February 14th, and the overload of pink-and-red crap everywhere is enough to make you get into bed and crawl under the covers until this hellish day is finally over.

If only there were a way to celebrate the holiday while exacting revenge on the one who did you so, so wrong.

Isn't there anyone interested in catering to the lonely, bitter people out there who are still holding on to years worth of resentment at a failed relationship? Finally, there is. And it couldn't be more perfect.

Hemsley Conservation Centre, a zoo located in Kent, UK, recently came up with the most genius way to celebrate the upcoming holiday.

For just £1.50, you can pick a name a live cockroach after your ex. That shakes out to just under 2 US dollars, which (in my opinion) is more than a fair price.

Seriously, take all of my money.

Why has no one thought of this idea sooner?! There are so many people that are basically human cockroaches, and they deserve to be forever immortalized in insect form.

"We are offering the chance to name a cockroach in honour of your worthless ex-'someone' on this special holiday of love," said the HCG.

"We are highlighting these 'bottom of the barrel' creatures through our 'name a cockroach programme' (we think adopt is a little too strong, after all – you probably don't want to adopt your ex) to raise money for our projects at the zoo." The HCG stated.

That's right. All the proceeds go towards funding future projects at the conservation center.

So not only are you comparing your ex to a repulsive creature for the world to see, but you're also helping out the efforts of this wonderful organization. It's basically the epitome of a "win-win."

The name of your choosing will also be on display at the exhibit, meaning you can visit your disgusting bug-ex whenever you feel so inclined.

I'm not sure why you'd ever want to do this (they're called an "ex" for a reason, after all), but who knows. Maybe you feel like showing off your awesome new significant other just to rub it in their creepy little-antennaed face. "See, Mark! I CAN do better than you!"

Not only will you get the satisfaction of getting back at your ex in the most juvenile way possible, but you'll also be sent a gift certificate as a keepsake. I plan on framing mine.

Be aware, however, that your ex's name will not appear on the actual certificate.

The Hemsley Conservation Center clarified in a statement why this decision was deliberate. “We don’t want to fuel a fire, so this is a keepsake for you or your friend."

"...although should you wish — the certificate does come complete with a message box!"

Oh, trust me, I will be writing that scumbag's name in that message box with such veracity that the paper might even tear. Luckily, I can just print out another certificate if that happens.

But what about if you're not harboring resentment towards a past betrayer?

You can do what true pals do best, and name one on behalf of a family member or friend. AKA, the perfect way to cheer up a bummed-out and spurned BFF this Valentine's Day.

"For those that don't quite require revenge, there’s another way to make you feel better about getting back at your ex this Valentine’s Day," said a rep from the HCG.

"The HCC is offering the chance to name a cockroach in honor of your friend's worthless ex-"someone" on this special holiday of love."

Remember when your friend was dating that enormous D-bag who cheated on her constantly?

The one who rocked a fedora, referred to himself in the third person and was always checking out other girls RIGHT in front of your bestie? Don't you think he deserves this unique honor?

Let's all take a moment to consider why naming your ex after a cockroach is so completely perfect.

After all, there are several striking similarities between these loathsome creatures and that idiot you used to date who treated you terribly, still owes you money, and will probably never realize how awful they truly are.

First off, cockroaches always seem to show up at the least opportune time.

You're hosting a fancy dinner party and BAM! You spot a disgusting little critter scurrying out from under a pile of dishes. Doesn't that sound exactly like your ex?

After all, they were always showing up when you wanted to see them the least.

Like the time they showed up drunk to your Great Aunt's funeral and made a complete fool of themselves. Okay, maybe I'm focusing on examples from my own life a bit too heavily, here...

Cockroaches are impossible to get rid of.

They can survive nuclear explosions, for heavens sake! Sound a bit like someone you know?

If you're like me, you tend to get back together with your exes WAY too many times.

Just when you think they're out of your life for good, they somehow manage to slither back in and get their hooks into you for at least another few months. See? Impossible to get rid of!

A cockroach can live for a week without its head.

Your ex somehow managed to live their entire life up to this point without a brain. Will the similarities never cease?! (Can you tell how bitter I am about my own former significant others?)

The reactions to this groundbreaking idea have been overwhelmingly positive.

It seems people have been doing little else but stew about their failed relationships since their breakups, and now, finally, have a way of releasing some of that built-up aggression.

This idea literally made this person's day.

That's right! They also send you a PHOTO of your new ex-cockroach. Which is kind of adorable, I have to admit. Almost like adopting a new pet!

This person had not one but several names she'd like associated with these disgusting creatures.

"How satisfying," she ends her Tweet with. Seriously, this is probably as therapeutic as actual therapy. And SO much less expensive.

"Sorry hun" is right. But hey, if Jake breaks up with you over this at least you've already taken care of this step!

This person really seemed to appreciate the "petty" nature of naming a cockroach after your ex.

Hey, if it's "petty" to compare the person who constantly disrespected you and totaled your car to a disgusting, worthless roach, then I guess I'm about as petty as they come.

This person wins the roach-naming game, hands down.

Seriously, have you ever heard of a better roach name than Theodore Oliver Grimes the Third? I think not.

Head on over to The Hemsley Conservation Centre's Website to find out more information and to donate to a worthy cause.

But the next time you run into your ex at a bar with their arm wrapped around someone new, you'll have the smug satisfaction that there's a repulsive cockroach named in their honor currently scuttling around a zoo in England.