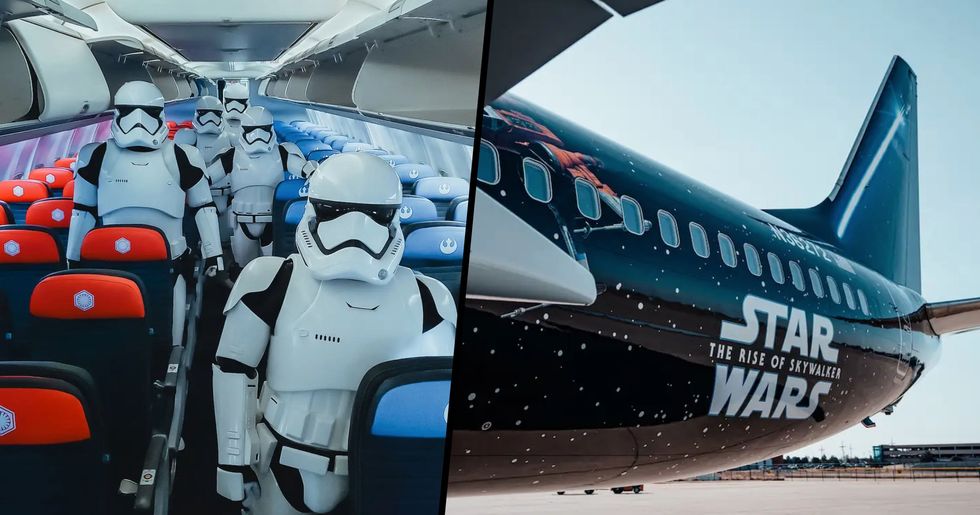 The Rise of Skywalker, billed as the last movie in the Skywalker saga, is heading to theaters next month, and to celebrate its upcoming release, United Airlines has a huge treat in store for Star Wars fans...

The company has created a full-blown Star Wars-themed Boeing 737 plane, kitted out in everything related to the iconic franchise. Though it may not quite be able to travel at the speed of light, the plane certainly boasts some impressive features and provides passengers with an immersive Star Wars experience, so they can fly just like a Jedi.

Keep scrolling to get a detailed look at the shiny new intergalactic treat, including how to book a trip of your very own aboard the aircraft.

The third installment of the Star Wars sequel trilogy and final movie in the Skywalker saga, The Rise of Skywalker, is heading to theaters next month.

The movie will see the Resistance face the First Order once again, and the end of the ancient conflict between the Jedi and the Sith. To celebrate the movie's upcoming release, United Airlines have created a Star Wars-themed aircraft that you can book to fly just like a Jedi. Keep scrolling to get an inside look...

Painted black all over to give it that intergalactic feel, as you'd expect, the plane boasts the classic Star Wars logo.

The aircraft revels in the power of the Dark Side on one side ...

Donning the trademark red color, one-half of the plane showcases the Dark Side portion.

The other is dedicated to the Light Side...

As you probably guessed, the Light Side boasts blue accents.

If you look closely, the detail is utterly impressive.

An insanely intricate Tie Fighter X-Wing starship can be seen near the aircraft's door.

A closer look at the tail of the plane reveals even more astounding artwork...

What would a Star Wars-themed plane be without the iconic Light Saber?

When you step inside the aircraft, the interior is just as cool...

True to the theme of the exterior, the seats are divided into good and evil, with the red seats showcasing the evil First Order.

And of course, on the other side of the aisle...

The blue seats bear the symbol of the brave Resistance.

Passengers can hear the film series' iconic soundtrack when they board.

And they also receive a commemorative pin.

While aboard the plane, passengers are then treated to Star Wars amenity kits.

We weren't kidding when we said everything is Star Wars-themed. United have truly gone all out.

But be warned, evil stormtroopers may be ready to greet you at the boarding gate.

Or they may be patrolling the surrounding areas on the lookout for the Resistance.

When tracked, the plane truly stands out from the crowd.

A Star Wars logo appears on flight-tracking screens. United have really thought of everything, haven't they?

The plane is flying across the US, Canada, Central America, and the Caribbean (so not a galaxy far, far away, just yet).

The one-of-a-kind plane has taken to the skies for the first time earlier this month - it's first flight taking off from Houston and flying to Orlando, Florida.

Fancy jetting off in the unique plane?

You can book a trip on the aircraft by looking up its tail number, N36272. For those who aren't lucky enough to snag a booking, you can keep up with its journies using FlightAware. To track it, just enter the plane's tail number and the aircraft will appear on the tracking map.