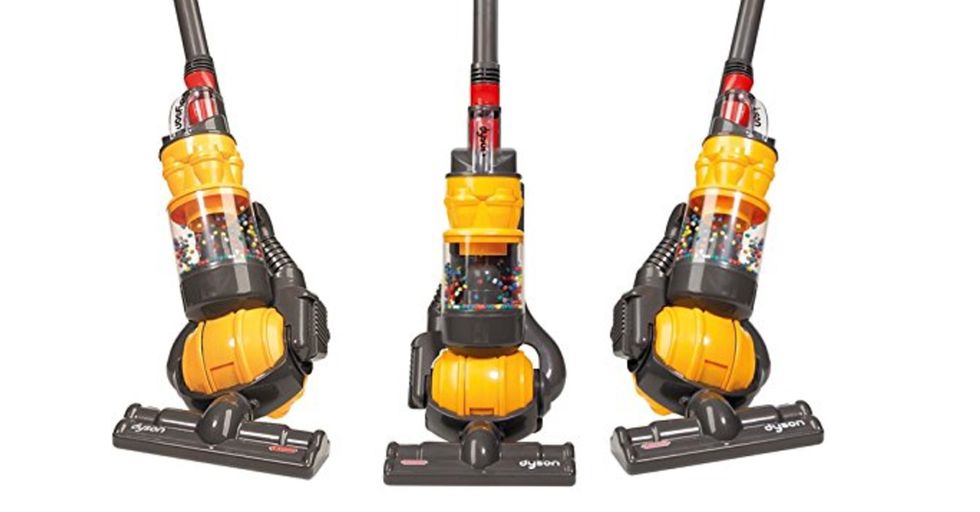 A Toy Vacuum That Actually Works and Other Bizarre Toys

There are a lot of positive reasons to have kids. For one, they say there's nothing like that moment when you hold your baby in your arms for the first time. The deep connection between a parent and a child is incomparable. You raise a tiny human into a big human and you watch them grow and carve out their tiny place in the great, wide world. There are movies and songs and books about being a parent. There are hundreds of articles on how to parent, tons of podcasts on parenting and plenty of unsolicited advice from in-laws and relatives.

But the best thing about being a parent? The most rewarding part about bringing a human life into the world?

You have someone to help you with chores. Yes, I said it. The best part of procreating is a child coming into your universe to help you with household tasks. Think I'm wrong? Well, you can now purchase a $30 toy Dyson vacuum for your child and it actually works.

Joking aside, being a parent is a beautiful thing.

But how much more awesome would it be if your kid thought they were playing with a toy, but they were in fact helping you around the house? The possibilities are endless!

Well now your wildest dreams can be a reality.

Dyson now makes a version of its ball vacuum for kids. And get this? The vacuum has real suction.
Buy Now

You can now literally trick your child into cleaning.

Isn't that every parent's dream? To hoodwink their offspring into cleaning their house, while said parent can finally kick their feet up and finish Mad Men, which they started five years ago? Ahem. I digress.

According to the product description on Amazon, the mini vacuum even comes with a removable debris drawer.

Now, obviously, it's not going to work like an industrial-sized vacuum. But it'll definitely pick up those spare crumbs that seem to constantly be on your carpet. It's crazy!
Buy Now

The toy vacuum has over 3,000 reviews on Amazon and is highly rated.

It's battery operated, and measures at about 25 inches. Perfect for your mini-me to shadow you while you tidy up the house.
Buy Now

Which is a good thing.

Studies show that a kid who is introduced to age-appropriate household chores will become a more independent adult. Research has shown that kids feel competent when they complete their chores.

It makes them feel part of the team.

It's also a great way to instill work ethic at a young age. This vacuum is a great way for your kid to have fun and learn about helping out around the house.
Buy Now

One Amazon user, Kelsie, wrote about how much her son loves his mini Dyson vacuum.

Our son, 1 1/2-years-old, is OBSESSED with vacuums and carpet cleaners. He has nearly broken my vacuum a few times because it's a bit too large for him to maneuver. We got him this for Christmas, and it was the only gift he cared about. He wouldn't open any other gifts after getting to it. His sister had to do the rest of them. He has been 'vacuuming' for 4 days straight. When I vacuum, he follows alongside me with it. It is a lot quieter than I expected. The sound doesn't get annoying. I love it! If it ever breaks, I'll buy him another. she wrote.
Buy Now

This toy sounds like a winner for parents and kids alike.

You might as well bookmark it for next Christmas, or add it to your wishlist if you have a child and you think this would be the perfect toy. Now, a working vacuum for a child may seem like an odd choice for a toy, but there are so many bizarre toys out there.

Listen, I'm all for a child learning how to survive, but this seems like a very bad idea. Also, ages 2 and up?! This is a 911 call waiting to happen.

This looks like something that would haunt your nightmare! Why would anyone buy this for their child? What is the point of this toy? I'm going to have nightmares for years because of this.

How about a unicorn that poops rainbows?

This is such a weird idea for a toy. What exactly would a kid want to do with this thing?

This "children's toy" looks like something from a horror movie.

Why would a child want to play with this? You can't tell me this thing doesn't come alive at night and plot murders.

I'm not even sure what to call this toy.

Is it a pillow? Is it meant to be comforting? I'd accept 20 mini vacuums instead of this horrifying face pillow creature.

This is a fun thing for a child to play in.

It's hard to say exactly what this terrifying face/car is. Imagine getting this thing for your birthday as a child.

The name of this toy is really something.

Maybe I'm just immature, but this name... Why? Who? What were they thinking?

This is a dark toy.

But I guess children have to learn about the "circle of life" at some point? Having them watch The Lion King seems like a much better way.

Did you know there's a "sperm cell doll" out there?

These toys are really something. Educational and, cuddly?

The Elmo doll is strangling this child.

I'm actually really worried about this child. Can someone check on this kid? Are they okay?

Who doesn't want to be given a toy with teeth?

Those are human adult teeth, which should never be on a doll. This is all sorts of disturbing.

This is the weirdest doll of all time.

Have you ever wanted a doll with the face of an adult, human man and the body of a lamb?

How about a baby in a peanut?

Haven't you ever wanted to play with a toy peanut with a baby inside? How fun.

There are no words.

Vintage toys are bananas. I can't believe anyone would want to play with this.

Every child's dream. My question is: what is the point of this?

A rubber foot is a fun toy!

When you were little, didn't you dream of a rubber foot?

This looks like something out of an Alien movie. What child in their right mind would want to play with this thing?

This bubble wand is shaped horribly.

Whoever designed this is having a great big laugh.

This doll needs to be burned.

Immediately. This will haunt my dreams for eternity.

An overpriced baby in a bottle.

What is this trend of baby dolls inside of strange things? What happened to the good ol' fashioned baby doll?

Toys can be so weird.

A vacuum that actually sucks stuff up? Seems pretty chill in comparison. Share this someone who loves vintage toys!