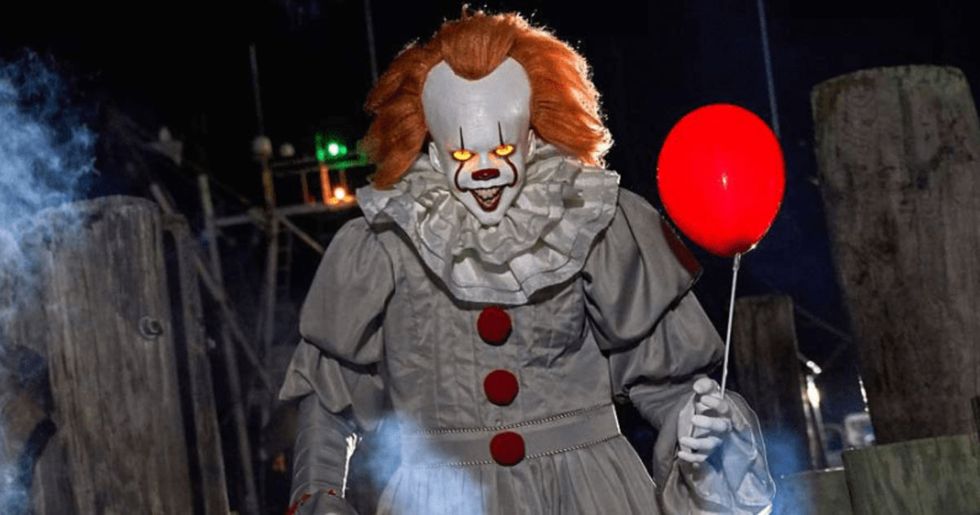 You Can Now Buy A 6’5″ Animatronic Pennywise For Halloween

IT Chapter 2 was released in theatres all over the world last week and we watched (in complete terror, might I add...) as The Losers Club were reunited to finally conquer the evil, child-murdering clown, Pennywise.

Though the film has received its fair share of criticism, it has made up for it with its box office figures. The movie scored an estimated ninety-one million dollars in its first 3 days, giving it one of the biggest horror openings of all time.

And now people are Pennywise obsessed.

So obsessed, in fact, that a giant, 6'5" animatronic Pennywise model is available to buy. Perfect timing for Halloween, I know.

The demented figurine is taller than most people, and even regurgitates scary quotes from the film courtesy of the voice of the real-life Pennywise, actor Bill Skarsgard. Who would want this in their house, I do not know...

IT is one of the most iconic horror movies of all time.

Originally released as a horror novel in 1986 by the grizzly genius that is Stephen King, the story of Pennywise the clown has very recently been brought back to life.

It tells the tale of an ancient evil entity haunting the town of Derry, Maine.

“The Losers Club," a ramshackle troupe of kids, discover this demonic entity and bravely vow to destroy it. However, the monster, which resurfaces every twenty-seven years to feed on innocent young children, thrives off children's fear, so it is therefore quite impossible to defeat.

IT has been fantastically remade.

The horror movie was originally released in 1990, when Tim Curry portrayed the demonic, yet noticeably less-spooky Pennywise.

But a modern-day Pennywise? Simply formidable.

When Andy Muschietti's IT Chapter 1 was released back in 2017, people were both horrified and thrilled to see the terrifying transformation that Pennywise had gone through... with a little help from CGI, of course.

Today's Pennywise has upped the bar for scary movies.

Because come on. You wouldn't want to see that stood at the end of your bed in the middle of the night, would you?

Well, some people would, apparently.

Because you can now buy a full-sized, animatronic Pennywise clown to have in your home. No, I am not making this up.

The figurine is eerily uncanny to the real Pennywise...

And comes complete with infrared sensor-activated actions and those spooky light-up yellow eyes.

And it won't be a subtle addition to your furniture...

Nope, because this bad boy stands in at a whopping 6'5", which is taller than most people.

However, Pennywise isn't a cheap clown...

As the figurine will set you back an eye-watering $269.99. I don't even have that much in my bank account... But, if you're throwing the best Halloween party ever, it's worth it, right? Here's a video of the model in action, just in case you need a little bit of persuasion.

Still haven't seen the movie, though?

Not a problem! I've put together a quick summary of what you could expect from the movie (I have too much time of my hands, I know...), which is a staggering 2 hours and forty-five minutes long...