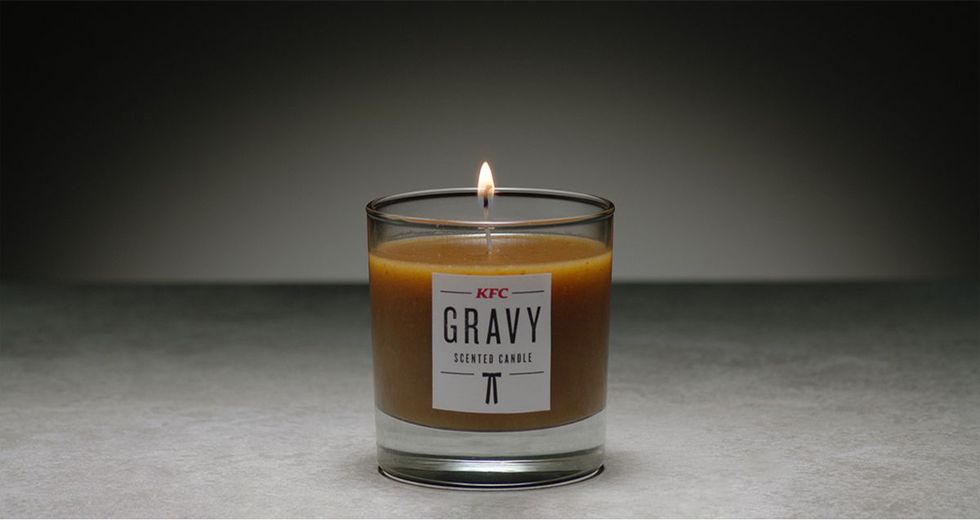 You Can Now Buy a Gravy-Scented KFC Candle

It's no secret that KFC knows how to innovate. Those 11 herbs and species have completely changed the fried chicken game, and redefined what it means to be "finger-lickin' good."

And you may have thought that KFC was done innovating. You've seen those failed commercials with the washed-up comedians, you know the KFC famous bowl is just a collection of leftovers that have been repackaged, and yet here we are. At the intersection between fast-food and modern living. Who even knew such an intersection existed? KFC did, that's who.

Don't get it twisted, this is not a sponsored post. As much as I'd love to be getting free fried chicken for life, I'm just a fan. And after today, you will be too. So let's check out exactly what I'm over-hyping right now so you can decide for yourself.

Everyone knows KFC is supreme.

I mean, just look at this giant bucket of chicken I found online. If your cartoon face was on anything that big, it'd be a pretty big deal. You'd call your mom and tell your neighbor.

And don't start with the Popeye's love.

The only thing Popeye's has on KFC is that Tuesday special, where you can get about two pieces of chicken for less money than it takes in gas to drive to Popeyes. So let me explain to you why KFC is better.

There's a new (and also dead) genius in town.

Popeye's doesn't even have gravy. End of argument, we're done.

But KFC just had to go and one-up its fast-food competitors by announcing this brand new KFC Gravy Scented Candle.

That's right. They're changing the game yet again, with a candle.

Picture this. Work was tough. You had to stay an extra hour to put out fires that you didn't start, while your boss left promptly at 4:56. The commute home is a chore, but luckily you stopped off to pick up a bottle of wine on your way, and the anticipation is making the drive home worth it. You park the car at your familiar abode, crawl out, drop your things on the floor and plop down on the couch. You put on The Masked Singer because apparently people are watching that show now, and pull out a glass for your bottle of wine. But something is missing. Some classical music? No. A handsome man? Never. A gravy scented candle? Always.

Studies have shown that gravy is more powerful than essential oils or mood crystals.

Okay, I just made that up – but honestly, it might as well be true. Next time, skip the eucalyptus oil and rub some gravy on your temples instead. It certainly couldn't hurt.

This isn't the first time KFC has done this.

Back in 2016, KFC New Zealand launched this Fried Chicken scented candle. But they've truly peaked with gravy. It's the perfect gift for your Valentine.

They also did a Fried Chicken bath bomb in Japan.

Now, I can't read Japanese, but I'm pretty sure all that text says that the Colonel is a genius. And I concur. But don't just take my word for it, listen to the fine folks of the internet who also agree.

Guess what? There's real gravy inside.

Because, well of course it is. Also, I'm not a doctor, but if I was, I'd tell you not to drink candle wax, unless you want your dying thoughts to be "Dang, I wish the gravy were real and not rapidly burning my esophagus."

You might be thinking, why on earth is this a thing?

And KFC answers with a completely well thought out and logical explanation that answers any question anyone could ever ask: Gravy.

Is this some kind of prank?

Nope! It's a real product. The catch is, you can't actually buy it. But KFC customers in the UK can apply to win a candle on their website if they're so inclined.

Move over PB&J or Mac n Cheese, there's a new power combo on the market.

Gravy and Candle. Who would have known?

This person is a heathen.

Lighting the candle is the only way to appreciate its true beauty. Like listening to that one Beatles album, but backward.

My people. Is it just as dangerous to eat cold wax as it is to eat hot wax? Asking for a friend.