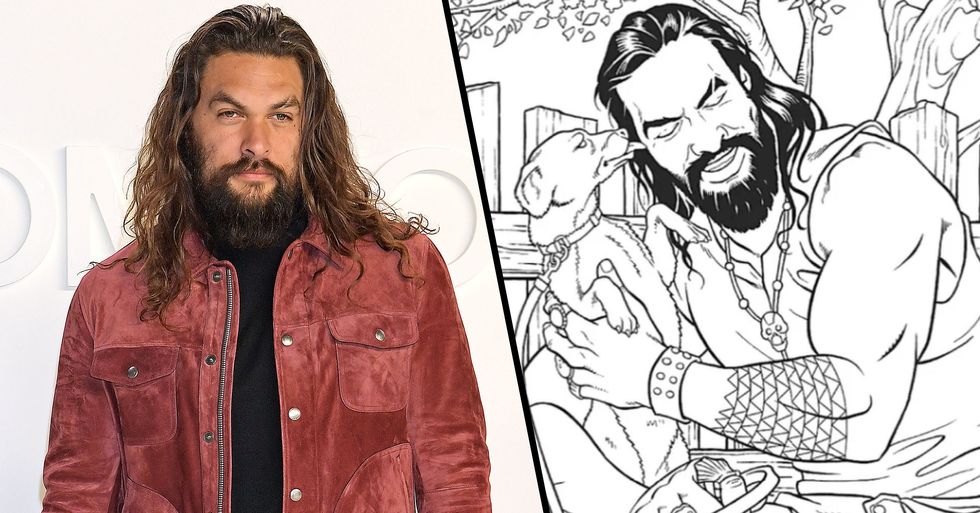 Now he's a verified superstar - with an icon for a wife and an enviable career. But one facet of his skill set he can never move away from is his heartthrob status. And his good looks seem to be the answer to a lot of our problems. You can now buy a Momoa-inspired coloring book to help with your stress.

Keep scrolling to see the cute pictures in the book... You'll definitely want one.

A few months ago, it announced that Momoa is set to star in the movie adaptation of classic sci-fi novel, Dune. The film will be directed by Denis Villeneuve, and will likely be released this year.

But I bet he never thought he would ever have this honor.

Momoa has recently ventured even further into the world of art and has had a coloring book dedicated to him, courtesy of Amazon.

And is described as "a fantasy-filled coloring book for the millions of Jason Momoa fans." Very fitting if I do say so myself.

"Escape to your very own rugged utopia with your favorite star!"

"Crush and Color: Jason Momoa is a collection of daydreams come to life on incredible coloring pages. Immerse yourself in more than 35 completely unique, life-like drawings of the rugged dreamboat in the zone and on top of the world."

Each picture has been hand-drawn.

"Let him take the helm on a sunset sail, witness impressive physical strength as he scales a colossal cliffside, and take in the serenity of quieter moments through colorable works of art. Caught on every page is Jason’s breezy charm and irresistible vigor ready for coloring detail. Color your way to a dreamier day with enamoring reveries and stirring displays of masculinity on each page."

So grab yours today from Amazon for under 10 dollars!

And if you don't fancy a Momoa, there are other hunks available such as Dwayne Johnson and Keanu Reeves. If you're in the mood to read more about how Keanu reeves stole the show at the Oscars, then keep scrolling.