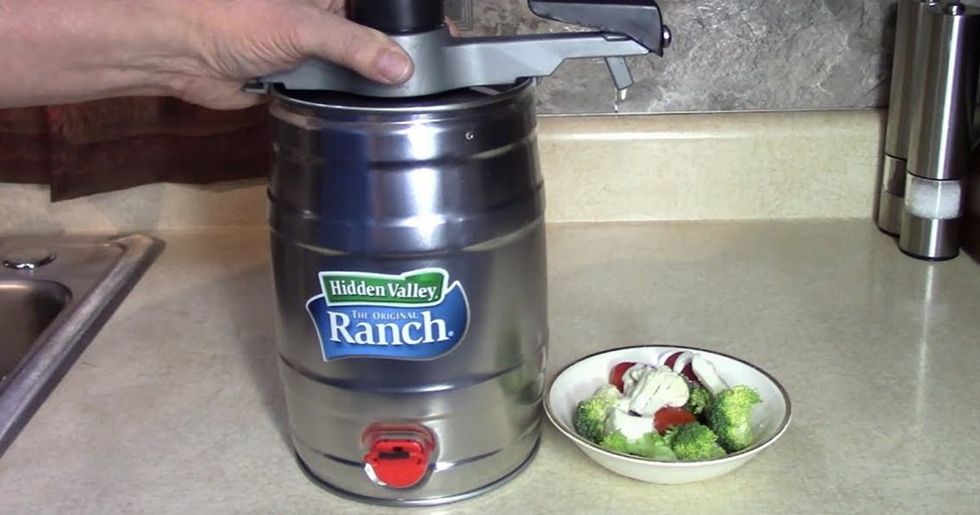 Hidden Valley Ranch Is Selling the Product of Your Dreams

Calling all Ranch dressing devotees! Hidden Valley recently announced something life-changing: For the first time ever, customers now have the opportunity to purchase an entire keg of their favorite creamy salad dressing and dipping sauce.

Why would anyone need that much Ranch? If you have to ask that question, you clearly just don't get it. For those of you who have ever felt the need to drown their salad in this tasteful dressing, dip their wings into the creamy sauce, or spread the deliciousness on top of a slice of pizza (yes, that's a real thing) then keep reading. You won't be disappointed.

Sometimes, instead of throwing you lemon after lemon, life actually surprises you and hands you a glass of lemonade.

I'm referring to the recent announcement from Hidden Valley, which states that they will now be offering something that people have been demanding for years: An entire keg filled with Ranch dressing.

Yep, you heard me correctly.

For the low low price of only $50 dollars, you can purchase a silver keg filled with the dressing of your dreams. Five liters of that dressing, to be exact.

Now, the non-believers among us may be scoffing in disgust at this momentous announcement.

"Why would anyone need that much Ranch dressing?" they're probably asking while dunking their carrots and drizzling their pizza with inferior dressings. "It just seems unnecessary. And, to be honest, gross."

But the true Ranch fans know in their hearts what a big deal this is.

Because the fact is, Ranch lovers put this stuff on everything. And I do mean EVERY. THING.

On pizza? Obvs. On wings? Of course. On salad? duh.

Poured directly into mouth? Yes, but only with the curtains drawn and a damp towel on hand for clean-up.

The thing is, Hidden Valley is not a company known to shy away from coming out with ridiculous Ranch-related products.

Take, for instance, this giant Ranch bottle that was available just in time for Christmas. Because nothing says "Seasons Greetings" more than a glowing inflatable bottle of salad dressing on your front lawn.

Oh, and did someone say Ranch Fountain?

Three tiers of heavenly, creamy delight just waiting for you to dip your veggies, toast points, and fingers into. Nothing says "instant party" quite like a Ranch fountain.

Feeling chilly? Warm up with a blanket featuring your favorite sauce.

It also gives you some handy tips on what types of foods go best with the iconic dressing. Veggies, drumsticks, pizza, fries... Excuse me for a moment while I mop up my drool.

These socks really let you express your Ranch-obsessed personality.

They also serve as your own personal Ranch delivery service. These babies will get you out of a variety of dressing-related crises.

As you might imagine, the reaction to this history announcement has been mixed.

Some people can't even imagine that something as magical as a keg of Ranch dressing could even exist, and is asking for proof. I can't say I blame him.

This person seemed to go through a rollercoaster of emotions upon hearing the news.

And while I totally understand the internal struggle, 15 seconds seems like much too long for him to have realized that he needs one of these in his life immediately. I mean, come on.

This is a classic example of a misused punctuation mark.

This person seems to have their priorities out of order.

Reading this tweet made my stomach growl so violently that it sounded like I was about to be attacked by an angry Jaguar.

After all, isn't this what everyone wants? And why have I never thought of dipping a Bloomin' Onion in Ranch?!

Meaning, "Oh my, where do I purchase a life-changing product such as this?" But also, that "year supply" sounds like malarkey. I'd give it six weeks at most.

Shockingly enough, the guys over at Esquire had some thoughts about the Ranch keg.

"Wildly unnecessary"? I think not. "Kind of awesome" I can kind of get behind.

Sure, there have been a fair amount of keg haters.

This Twitter user seemed personally offended by the Ranch keg. It's almost as if they refuse to let themselves experience pure, unadulterated joy.

This person just asked a simple question: "But why?"

Because the people demanded it, that's why. And it's time to get on board because history will remember those who turned their backs on the Ranch keg movement.

Honestly, I understand this guy's hesitation.

A measly 5 liters does sound a bit on the puny side. Luckily, there's no limit on how many kegs you can buy at one time.

This tweet should make parents across the globe breathe a sigh of relief.

Imagine if all the beer kegs at college parties were replaced with Ranch kegs! Your kids might actually graduate instead of partying every night and sleeping through their classes every week!

Seriously? This is what constitutes a nightmare to some people? What could be nightmarish about a keg filled with sweet, sweet Ranch? Maybe if it was filled with bees, instead...

Lots of folks have been showing off their kegs on social media.

This is the type of look you have when you get exactly what you wanted for Christmas. Actually, every day will feel like Christmas with one of these babies in the kitchen.

I'd really like a formal invitation to this party.

Because I would show up. And I would party like I've never partied before. Meaning, there would be Ranch involved.

Some people knew exactly who to share this news with the minute they heard it.

You're not alone, Lucca. Tons of people shared it with me, too. People I haven't even spoken to in years. It was an eye-opening experience.

Okay, so even I draw the line at a spaghetti and Ranch sandwich. There's something about the combination of flavors and textures that just seems wrong.

Why stop at one keg when you can buy 5? Or 12? Why not stock your pantry with them to prepare yourself for the apocalypse?

This woman's "most America thing that has happened" tweet is a bit of a stretch.

I mean, we do now have the freedom to purchase 5 liters of Ranch at one time, which is a very American concept if you think about it. It almost brings a tear to my eye...

The truth is, the Ranch haters will never understand what makes this announcement so monumental.

All that matters is that we always remember where we were when we heard this life-changing news. Snatch up your own personal keg of Ranch at www.flavourgallery.com quickly before it sells out.