You Can Now Get an Instant Six Pack, Just by Having Surgery in Thailand | 22 Words 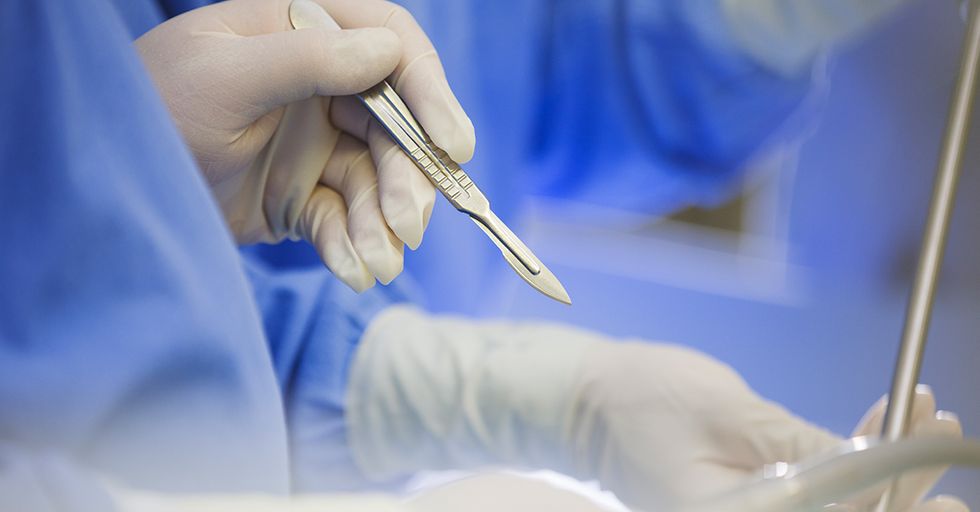 You Can Now Get an Instant Six Pack, Just by Having Surgery in Thailand

When you see someone with six-pack abs, you immediately know two things about them. Number one, they are incredibly dedicated to their diet and exercise, and number two, they are a better person than you. Hey, don't take it personally — it's just the truth. People with six-pack abs deserve society's adoration more than any of us with big sloppy bellies spilling over our belts.

And now, there's an easy way to join the ranks of the ab elite — a hospital in Thailand specializes in a surgery that can give you the washboard abs we all want but, if we're being honest, know we don't deserve.

Why would someone put themselves through the inherent risk of going under the knife just to make their stomachs sexy? Don't they know our stomachs are almost always covered by t-shirts and vests? Let's take a closer look at both the surgery and abs themselves to see if we can come up with an answer.

If we all want six packs so bad, why don't we just get them?

The idea of getting surgery to give yourself abs seems strange on the surface. We all know how to get abs — you just eat right and do a ton of crunches and planks and leg-raisers and mountain climbers every day.

If you haven't done them in a while, it's easy to forget that those stomach exercises suck. They are honestly the all-time worst things to do. If I got captured by the Jigsaw killer from Saw, who forces you to do horrible things if you want to survive, he would for sure make me do bicycle crunches.

Second, dieting is also the worst.

You're telling me to get abs, you have to not only do sit-ups but also have to avoid the best foods? That doesn't even make sense! If you're not going to McDonald's, how are you supposed to reward yourself for doing the sit-ups?

And third, I don't think anyone really knows how to do sit-ups right.

Where do your elbows go? Do you breathe when you're going up or coming down? What's the point of having someone holding your feet? Is it just an excuse to feel close to someone? Sit-ups are confusing.

The only people who for sure know how to do sit-ups right have six packs, and they aren't telling!

If people with six packs aren't careful, six packs could just be normal parts of the human body, and the six packed would lose their inherent sexiness advantage over those of us with without six packs. At that point, having a six pack would be no more sexy than having a nose.

But we all want six-pack abs, maybe more than anything.

There is no greater feeling in the world than taking off your shirt at a crowded beach and just knowing you look fine as hell. (I assume. I have never taken off my t-shirt in front of another person and I hope I never will.)

And now, a hospital in Thailand can give them to you!

Getting a rippling six pack would be worth a trip to Thailand in and of itself! Also exploring and immersing yourself in a new culture. I suppose that'd be pretty sweet too.

The Masterpiece Hospital, located in Bangkok, Thailand, can give you abs.

While ab surgeries that use silicone implants have been around for a long time now, the Masterpiece Hospital has its own method of crafting abs that supposedly lasts longer and looks better.

And unlike your personal trainer, they won't make you do a single sit-up.

As if doing sit-ups wasn't a nightmare on its own, having a personal trainer bark orders at you like "one more!" or "are you really only going to do one?" and "I'll still have to charge you for this session" make them even worse.

You just have to get your belly all Sharpie'd up...

You have to wonder how many plastic surgeons got into the game to use people's bodies as enormous dry erase boards. I'm going to guess the answer is "almost all of them."

... drain your belly blood out into this weird cage of bandages...

Oh hey, I think I saw this in a book on medieval torture devices one time. Why was I reading that book, you ask? Well, I've found it's nice to wind down before bed with a bit of light reading.

Ahh, okay. See, from the first few pictures, I couldn't tell how a bunch of drawing and slicing would lead to abs. But looking at this picture, I can see it coming together.

And walk out with the best abs on the beach!

Ooh baby, those are some fine looking abs! I could grate cheese on 'em! Of course, that is because I lost my cheese grater. Starting to think my mom stole it last time she was in town visiting.

The surgery is done with a process called "abdominal etching."

Unlike the abdominal implant surgeries that add hunks of silicone to the stomach to make the six pack pop, Masterpiece Hospital goes in and "etches" the shape of an abdominal.

It removes and re-shapes the fat around your abdomen.

For all intents and purposes, Masterpiece Hospital shapes its patients' belly fat into a six-pack instead of cutting it away and jamming a hunk of silicone in there.

According to the head of Masterpiece Hospital, surgeon Raweewat Maschamado, the surgery is very popular.

"We've been doing this for about three to four years now," Maschamado told Coconuts Bangkok. "We get anywhere from 20 to 30 customers requesting a six-pack every month."

Wow, just think of all the surfing you could get done with that many abs...

And before you start thinking this is all some kind of a scam...

... know that Masterpiece Hospital is completely above-board. "We are a licensed, legitimate hospital, unlike many other cosmetic surgery clinics around Thailand," Maschamado said. "We have access to anesthetic and quality medicines." Good enough for me!

That's around $3745.14 USD, which sounds like a fair price. I mean, gyms in Los Angeles cost around that much every month. Wait, nope. Nope, I just checked it, and gyms cost significantly less than $3745.14 USD a month. My bad.

So if you just skip your morning latte from Starbucks for the next two to three years...

... your abs will pretty much be completely paid for!

This surgery is a potential game-changer (gut-changer?).

No longer will only the rich and powerful and dedicated hoard all the abs for themselves! Are you telling me I don't deserve to have just some beautiful ripple stomach muscles just because I'm poor, stupid, and lazy?

Some people are physically unable to get a six-pack.

There are, of ocurse, the people who would benefit from this surgery in beneral — those who can't get a six pack no matter how many bicycle crunches they do.

For some people, that's because it's almost impossibly hard to get them abs.

A lot of times, emotional scarring can cause us to develop certain habits that are hard to break. Many people use food as a way to feel better right away, and while exercise is a wildly effective way of improving our mental health, not a lot of people know where to start.

But thanks to the Masterpiece Hospital, those people can get all the definition they want!

It is truly incredible that we live in a world where surgery can give us whatever we want. What's next? Will we someday be able to have surgery to make our broken bones come back together, as though by magic?

Unfortunately, there is no surgery for a work ethic.

To be clear, I'm not saying everyone who would consider getting an ab surgery isn't a hard worker. I'm saying that this surgery is 100 percent a shortcut to a terribly difficult goal, and in a lot of ways, misses the point entirely. Abs don't make you attractive — being a hard-working, dedicated person makes you attractive.

If you skip the work, you're probably going to get fired.

See, having abs isn't a right.

It's a privilege, one you earn by going through an extreme physical challenge. And taking the shortcut that is a surgery to have abs means you're depriving yourself of an opportunity to grow as a person.

Unless you use the confidence boost from your new abs to propel your career to new heights!

In that case, I am wrong. If the abs make you feel good about yourself then get the damn abs. But then funnel that confidence into a productive place and go get that promotion you deserve, you sexy-ass hunk of middle manager.

And now you'll never have to do another sit-up again.

Leave the gym. Never look back. You're free now. Go be happy out in the world, and never let your stomach hurt again. (I mean never let your stomach hurt again from exercise, not from doing stuff like eating too much pizza. There is no point to getting six pack ab surgery if you don't then eat non-stop pizza for every meal for the rest of your life.)