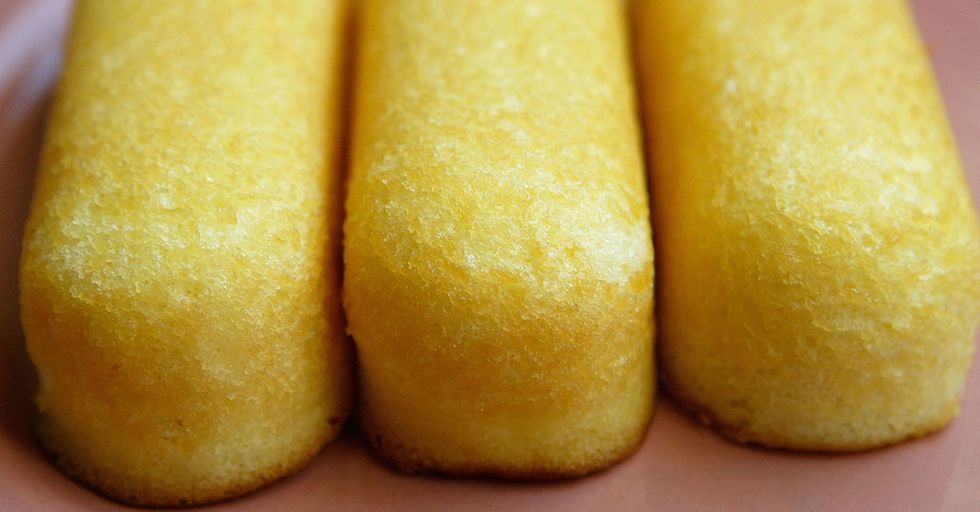 You Can Now Make Your Own Twinkies at Home

Time to talk about the ultimate sweet-tooth's guilty pleasure: snack cakes. Specifically, we're referring to Twinkies. Hostess (and other companies that produce similar snacks) have a ton of snack cakes to choose from. But Twinkies have always been the immortal favorite, one that has been loved by many.

But did you know that you don't have to run to a grocery store for your Twinkies anymore? You could just make them at home! And not some approximation of a Twinkie – Hostess has made sure we're getting the real deal. There's an actual oven to make Twinkies with. Kinda like an Easy-Bake Oven, but exclusively for Twinkies. So if that sounds interesting to you, keep reading! Find out how you can make your very own homemade Twinkies.

Well, for your taste buds. Maybe not for the rest of you. You can now make Twinkies in your own home!

It's called the "Hostess Twinkies Maker," and it's built specifically to bake up a fresh batch of Twinkies.

It bakes six Twinkies at a time. Plenty for a snack (or a meal).

Being that this Twinkie oven makes authentic Twinkies, you shouldn't notice a difference between these and Twinkies you'd buy at the store.

Except, perhaps, the freshness.

In which case, you're even better off with a Twinkie maker!

As long as you follow the instructions, you're good.

And the Twinkie maker comes with a recipe book, so that shouldn't be too big a problem!

In case you didn't know, there's more than just the classic. The recipe book includes recipes for chocolate, red velvet, and other flavors too.

The whole process is quick, too.

According to the instructions, the Twinkies only take 4-7 minutes (or until the toothpick comes out clean) to bake.

So you won't be waiting forever!

You know, if you're really craving those Twinkies, you'll definitely get 'em fast!

The oven is pretty portable, too.

Do you want to see it in action?

Check out this video, and see how the Twinkies Maker works for yourself.

Do homemade Twinkies make for a more classy dessert?

Well, either way, you'll be able to say that dessert is fresh out of the oven.

It makes for a unique gift, too.

You can't imagine anyone else is giving your friend a Twinkie Maker for their birthday!

So get your stomach ready.

Because this brings Twinkies to a whole new level for people!

Or, if you don't wanna spring for the whole oven...

That's not the only snack you can replicate at home.

There are more products like the Twinkie Maker than you might think! Here are some of them.

Why are the Pop Tarts on sticks? Who knows. Maybe just for the novelty of it! But if you've ever wanted to make a homemade version of a Pop Tart, here's how.

This oven comes with recipes, too.

Like the Twinkies Makes, the Pop Tarts (on a stick) Maker bakes up six tarts at a time – in a number of flavors!

There's also a regular version, if sticks are super objectionable.

Either way, you'd be getting a Pop Tart!

It bakes three larger pop tarts. And with either oven, the tarts can be different flavors.

You can also go nuts with the decorations.

Use that creativity and make Pop Tarts prettier than you'd find in any box!

If those chocolate cupcakes are more your style, there's an oven for that too.

It's also got a recipe book.

You can make more than just the standard Hostess cupcakes in there, but the oven does come with a pastry bag with which to do just that.

It's also just a cupcake-maker in general.

Cupcakes, brownies, fruit bites – you can get creative with it!

Hey, as long as we're talking about guilty pleasure foods, there's also a corn dog maker you can pick up.

Because you can never have too many hot dogs on a stick.

And the kit comes with a recipe book for "traditional country fair corndogs."

Maybe you're not looking for savory.

So use it for cake pops instead! It's totally doable.

But not too general. Speaking if homemade sweet-treats, have you ever wanted to make your own doughnuts?

Doughnut makers (like this one) can get you all set up to make your own round confections. There are also doughnut pan modes if you want to go even more self-sufficient with it.

Hopefully, the realm of dessert-making (and Twinkie eating) just got a lot more feasible! Know anyone else who loves Twinkies? Share this story with them!