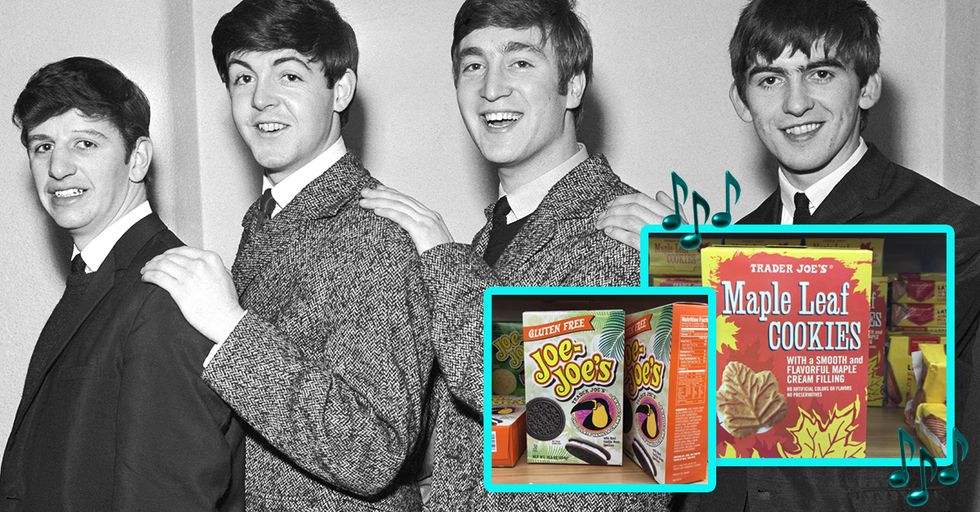 Every once in awhile, the universe just makes sense. Like when the turn signal of the car in front of you perfectly syncs up with the music you're listening to. Or when the number of chips you have perfectly matches the amount of salsa you scooped into a bowl. Or when you finish your hair conditioner at the same time as your shampoo. (LOL, just kidding about that last one; that has literally never ever happened.)

When the universe gives you signs like that, you have to notice them. Like, really notice them. Maybe even tweet about them. That's exactly what Daniel Spenser did when he discovered one of the galaxy's most wonderful coincidences on a recent trip to Trader Joe's.

There's a lot to love about Trader Joe's. With a name like that, you know it's a store you can trust to provide you with a good time. (Otherwise, it'd be called Trader Joseph.)

If the name isn't enough to convince you Trader Joe's is cool, the fact that all of the employees wear Hawaiian shirts should quickly set your mind at ease. This place is fun and laid back.

Do I really need to say more? (If you're tragically unfamiliar with the ambrosia that is cookie butter, it's basically peanut butter except instead of peanuts, it's cookies. And yes, it is amazing.) But now, thanks to the eagle eyes of designer Daniel Spenser, there's something new to love about your favorite grocery chain.

In order for this all to make sense, I'm gonna need you to open this video in another tab and listen to the song in the background as you continue reading.

It's the only way this will work. Trust me. OK. Do you hear the dulcet tones of Paul McCartney? Good. Please continue:

Spenser noticed something amazing about a bunch of the food at Trader Joe's. Their names sync up perfectly with the musical phrase "Eleanor Rigby."

Not only does Trader Joe's have great prices, all of their merch fits into "Eleanor Rigby." https://t.co/TjoxbE1dAz
— Daniel Spenser (@Daniel Spenser)1507425135.0

Go on, give it a try! "Mini beef tacos." "Fantasy pumpkins." "Harvest whole wheat bread." "Fat free ricotta." This can't be a coincidence.

If you can read this next tweet without humming the tune in your head, you are some kind of superhero:

You couldn't do it, could you? I knew it. I know what you're thinking. Spenser found the only four products in the store that just happened to work with the phrase "Eleanor Rigby." No, friend. There are more. So many more...

This one has the additional delight of alliteration. It's poetry, I tell you! It could also be a reference to the Beatles' song "Get Back." Coincidence? Impossible.

Obviously, what we're looking at here is concrete proof that Trader Joe — whoever he may be — is secretly a huge Beatles fan who's obsessed with the song "Eleanor Rigby." That's the only explanation I am willing to consider.

OK, yes, for all you pedants out there, this basically boils down to some foods having five-syllable names. But come on. Play with me in this space. Now, Sing it with me! "5-cheese Greek spiral! It is a spiral, so cheesy and also so Greek...What do you think?" (Slant rhymes count, OK?)

"Maple Leaf Cookies, with a good filling of maple, so creamy and smooth..." Could I stop doing this? Maybe. I'm not really sure. I don't want to find out because I'm having way too much fun singing about these foods.

This person gets it! Here's another Beatles reference: "Help!"

It doesn't have to stop there. Hey Jude, I Want to Hold Your Hand as we travel The Long and Winding Road Across the Universe to Trader Joe's to buy some food. Also, I Am the Walrus. Were you thinking that was the end of foods that sync up with "Eleanor Rigby"? Nope! Still not done...

If quinoa had been a thing like it is today back in the 60s, I am 100 percent convinced "Eleanor Rigby" would have been called "Pesto and Quinoa." Don't @ me.

Other people have started joining in the fun with their own Trader Joe's/Eleanor Rigby mashups:

"Stella di Notte" lends a real ~*~international~*~ flair, which is just what this meme needed.

Next time you're in Trader Joe's, you're going to start singing. It's just a fact.

The amazing thing about Gallagher Quigley is that it is, presumably, a real name, and yet it sounds way more fake than Eleanor Rigby (an actually fake name). Weird how that works out, right? Anyway, I'm off to do some grocery shopping/Beatles listening.