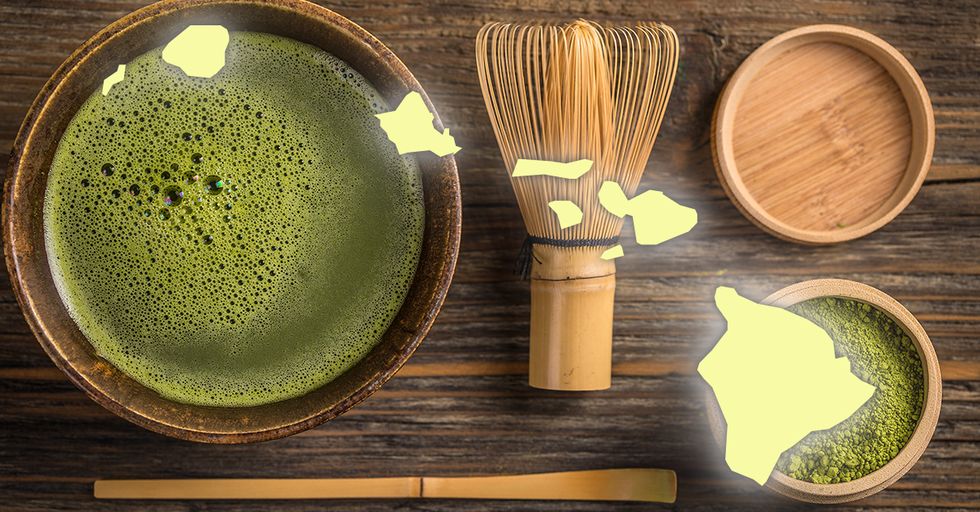 No matter how many things may seem to separate the people of the United States of America, we still have one very important thing in common: Food.

It's great! Not only does it provide much-needed nutrition and sustenance, but if you're lucky, it tastes really good, too.

Of course, the types of foods that are popular often differ depending on which part of the country you're in.

Here are the most-searched food items from each state, according to Pinterest's World's Fare Report.

The people of Alabama can't get enough of that sweet dessert known as pound cake. Its name comes from the fact that pound cake is traditionally made with one pound of each of four ingredients: flour, butter, eggs, and sugar. Of course, if you really want to take things to the next level, you can't go wrong with a good glaze.

Alaska, on the other hand, doesn't appear to be much for dessert items. The most-searched food item in The Last Frontier is survival bread, which is basically hardtack. It's made from flour and water and, if you're feeling especially adventurous, maybe a bit of oil and/or salt for taste.

In Arizona, you can expect chiles to make an appearance in savory dishes. They're an ideal addition to chili, enchiladas, cheese dip, breakfast skillets — pretty much anything that needs a little extra kick.

Coca-Cola is having a moment in Arkansas, but it's not just as a beverage. You can use the soda to glaze ham, make an extra moist cake, kick your baked beans up a notch, and even to make flavorful rice.

It figures that figs would top the list in California; they're one of the most abundant crops in the Golden State. Whether you pair them with honey and yogurt for a sweet treat, or with bacon for something a bit more savory, you can't go wrong with the fig.

Three cheers for carnitas! The term translates literally to "little meats," but any dish featuring carnitas is sure to be a huge hit. The true connoisseur will make homemade carnitas — it takes a lot of time and dedication but is so, so worth it.

Holy cannoli! The people of Connecticut are apparently really into this Sicilian pastry. Technically, a single pastry is called a "cannolo," but considering the fact that it's impossible to eat just one, you probably don't have to worry about the semantics.

When you're talking about the East coast, you can't be too surprised to see crab top the list of most-searched foods. The people of Delaware know how to cook this crustacean right.

Yes, according to Pinterest, "cake toppers" are the most-searched-for food item in Florida. We realize it's not technically a food, but it is food adjacent! Plus, people are going all out with unique cake toppers these days.

This year, Georgians are obsessed with chicken wings. Deep-fried, barbecued, baked — is there a wrong way to cook a chicken wing? As long as you've got a plethora of hot sauces, you're doing just fine. Now, onto Hawaii. Any guesses as to what foods they're searching for?

In case you haven't come across matcha at your local coffee shop, you should know it's a finely ground powder made from tea leaves. It has a sweet, grassy flavor and can be used either as a standalone beverage when mixed with hot water or tea, or as a flavoring agent for a variety of baked goods.

Idahoans know how to plan ahead. That's why they can foods so that they can be used throughout the entire year. Canning is actually much easier than you're probably thinking it is — give it a try! Your pantry will thank you.

We're pretty sure there's no such thing as a bad soup, but we're still surprised to see a non-standard soup like wild rice soup at the top of the list in Illinois. Still, it looks just as cozy as you'd hope for soup to be!

Ah, the Midwest: Home of the casserole. Hoosiers have perfected the noodle casserole. If you're looking for a way to taste their wares, head to the nearest church potluck and there's sure to be a variety of casseroles on display.

Chex Mix has the benefit of already being delicious in its pre-packaged form  — that's a level of cooking that we can easily get behind. Is it truly a party if Chex Mix isn't available in a giant bowl? We don't think so. Now, on to Kansas!

Yet another perfect pairing: shrimp and pasta. (Also: shrimp in po'boys, shrimp in jambalaya, and shrimp in pretty much anything else.)

It's official. We're planning a donut-centric vacation to Maine. How many donuts is too many donuts? We're going to find out whether such a thing is even possible.

Scallops: Difficult to master, but delicious once you do. Don't forget the lemon butter!

Butternut squash is great in pasta, as a soup, or even roasted with some butter and brown sugar. Paired with some sage and maybe some truffle oil? Now you're speaking our language.

If you've never had a no-bake cookie before, we can't recommend them enough. No baking required (although you do need a stovetop for chocolate melting purposes).

Broccoli salad is one of those things that you insisted you didn't like as a child...until the first time you actually tried and found out it's surprisingly delicious. Minnesota knows what's up.

If you're not putting chicken in your spaghetti, you're missing out, friend. You can either add pieces of cooked chicken to your pasta dish or bake it all together in a tetrazzini. Either way, it's totally delish.

OK, we'll admit it: We didn't even realize cheesecake dip was a thing until researching for this article. It seems to be all the best things about cheesecake in a dip. We are so onboard.

In Montana, people are looking up various scones recipes. They're great as a breakfast treat and come in both sweet and savory varieties. Yum!

Nebraska's a fan of Sloppy Joe sandwiches. They may be messy, but they're sure to be delicious, too. Sometimes the mess is part of the fun!

This trendy dessert item is enjoying popularity in Nevada. It's the perfect way to serve cake without any of the slicing. Or dirty dishes!

New Hampshire is getting fancy with this classic cocktail. Add some extra olives and make it a dirty martini, and we are there.

New Jersey is also getting in on the alcoholic beverage action, although New Jerseyans land on the sweeter side of things with fruity sangria. They clearly know how to party.

Yet another food that can be both savory or sweet! There's so much to love about these cozy treat pockets.

Falafel is a deep-fried ball or patty typically made from ground chickpeas. They're excellent dipped in tzatziki and wrapped in a pita! Bonus points if you've got stuffed grape leaves on the side.

Banana pudding might instantly transport you back to your childhood. Nilla wafers are kind of a must as far as garnishes are concerned.

Oatmeal bars are wonderfully versatile. Pretty much anything that you can put in oatmeal, you can bake into an oatmeal bar. Our favorite combo is raspberry with coconut flakes and a few white chocolate chips!

Taco soup offers all the flavor of a taco without the inconvenience of cracked shells or stuffing falling down onto your plate. It may be a little unorthodox, but we recommend sprinkling the tiniest bit of coconut on top!

There are several different kinds of curry, each of them the ultimate in coziness and tastiness. If you also make your own homemade naan for dipping, you are a master chef.

Who could forget this sickly sweet liqueur? Without it, there'd be no fuzzy navel, sex on the beach, or bikini martini. And who wants to live in a world without those?

For whatever reason, the citizens of Rhode Island are particularly interested in cupcakes these days. But not just any cupcakes. Flower cupcakes. And honestly, we get it. What a delightful way to welcome spring!

South Carolina is also into cupcakes right now, but their hearts are set on the classic red velvet variety. Who says they're only for Valentine's day?

These little potato nuggets are great for topping casseroles or simply on their own (or dipped in ketchup). They bring back memories of school lunches.

There's nothing better than a warm slice of cornbread slathered with butter and drizzled with honey. For true authenticity, it should be baked in a cast iron skillet (but we're not picky).

Not only is the avocado great for topping tacos or making guacamole; it's also an excellent little boat for holding tuna, chicken salad, or any number of other stuffings. It's also a great method for cutting down on carbs if that's something you're trying to do.

In Utah, people are looking up recipes for coconut chicken. It's a perfect blend of crispy, juicy, sweet, and savory. And, of course, you can't go wrong with a good dipping sauce.

In Vermont, it's all about the beets. We're pretty sure roasted beets and goat cheese is one of the best flavor combinations on the entire planet.

Virginians can't get enough of smoothie bowls. It's a smoothie that you eat with a spoon! Plus, you can make it look all pretty with chia seeds sprinkled on top.

Washingtonians are searching for an easy Thai chicken recipe. We applaud them for going the homemade route rather than simply ordering out.

In West Virginia, pumpkin desserts top the list. That includes the classic pumpkin pie, but also cheesecake, tarts, cupcakes, and any other sweet pumpkin-y dish.

No, it's not dog food. Puppy Chow is a delicious dessert made from Chex cereal, peanut butter, chocolate, and powdered sugar. It makes a huge mess when you're eating it, but it's so worth it.

Finally, we come to Wyoming. There, people are looking up energy bites: an efficient way of getting protein in a small, easy-to-transport package.