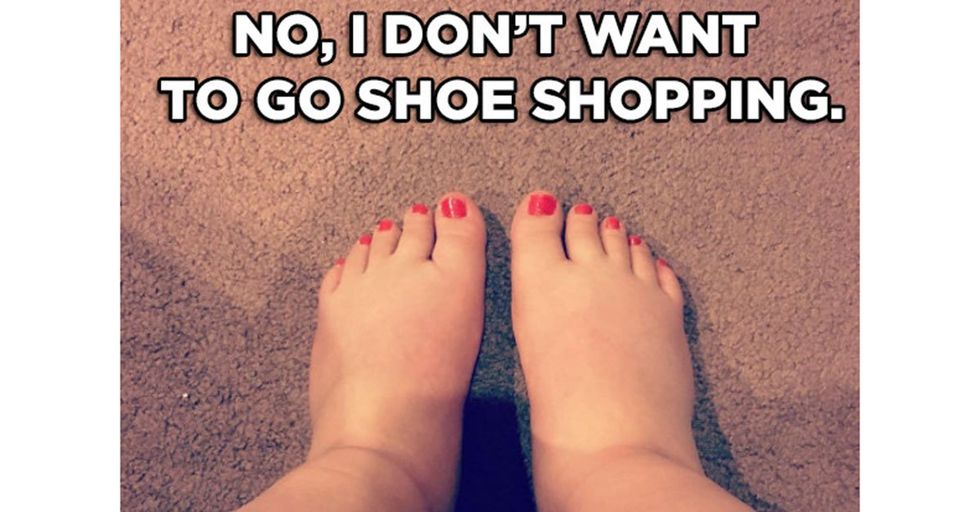 Pregnancy might be a gift from God, but for many women in their third trimester, it can also be equal parts frustrating, painful, and funny.

If you're not sure how all those different feelings can exist at once, check out these images below and then you'll get it.

I think this comes after pregnancy, but you could point at your belly, too!

You'd be hard pressed to make something as cute as a baby otter though. Look at its little fingers! Also, this mom just looks so proud.

I think all of us can relate to this one, pregnant or not. Comfort is king. Or queen, depending on your preference.

Just one of you is pregnant.

Couples saying "we're pregnant" is one of the worst things ever. Thankfully it seems like that trend is dying out, with help from both genders. Women have to deal with all the inconveniences and pain of pregnancy, so they deserve the glory. And men want nothing to do with that pain and physical inconvenience, so they're plenty happy to let 'em have it.

Some of us can do that too! But we don't have to be pregnant for that. You won't believe this next one...

That's certainly one way to break the news. The parenthesis around the drinks sells it. She went full PEMDAS with it at least, so at least she seems to be learning in school?

Or you could find out where Shaq buys his shoes and go there. You're probably better off just waiting it out though. Most of the time your feet will go back to normal.

This is applicable for pregnant people as well as those of us that like to eat big meals. Not pregnant, just eatin' good. Maybe we should look into muumuus?

Bad puns galore. But it's got to be a little irritating if your baby decides it's time for a mosh pit while you're trying to sleep.

So does bending over. And walking. Or really anything involving physical activity. We all understand this next one...

Blame it on the hormones.

There's at least some logic behind that, sort of. But soon enough you'll be able to unlock your house with your phone or something anyway, so you won't even need keys. Good luck getting in your house then.

Was there any question?

We want to meet the genius that designed this ad. I don't think you'd need the pregnancy test at that point, you might as well wait it out and see. She's either pregnant or Alien is getting ready to burst out of her.

Although, penguins waddle. Penguins also have swag. And pregnancy penguin has a pretty good ring to it.

Unless you see a baby falling out of her, stay quiet.

Seriously, take this advice. There is no right way to ask this question. There's not really any reason to ask either. If she wants you to know, you probably know.

Although that picture makes you look more like a bee than a human. You're a queen bee though. This next one is hilarious...

Even the hardest of rockers have some early nights. Heck, I'm sure Ozzy Osbourne falls asleep at like 4:00 P.M. while watching re-runs of Maury. We've all been there.

You can't shave what you can't reach.

Plus, you won't want anyone near you or your legs for a long time. No point anyway!

It doesn't matter. Either way, you pretty much have a free pass.

That's one of the great things about being pregnant. You're never wrong! Who's gonna argue with a pregnant lady? We don't recommend it.

Nine months can feel like an eternity when you're carrying nearly ten pounds of extra human on your front. Just know it'll be over soon!

Think of it as the last lap of a race, or the last minute of a basketball game. Except you won't score a point or win the race, your water will just break. Less glamorous, but more important. We can't get over this next one...

This applies to every couple, pregnant or not. But when you're pregnant, your man better kiss that remaining quarter of the bed goodbye. He can't sleep on the couch though, 'cause you'll want him nearby. So he'll somehow have to exist on one microfiber of the bed.

Sometimes your hunch is good enough.

Ladies, you and your baby bumps are all beautiful, but holy crap this is hilarious. This needs to go into the Meme Hall of Fame.

No need to ask. We understand.

This is definitely a fantasy.

Unfortunately, fantasy is not reality. But now that we think about it, it does seem like a lot of work to literally grow another human.

Back to the penguin thing again! It's nothing to be ashamed of, penguins are awesome. Did you know same sex penguin couples have been known to adopt eggs that couldn't otherwise be hatched? Progressive penguins! This next one is so relatable...

Side-eye from straight ahead.

"Nope, not pregnant. Just woke up with this weird bump on my stomach about 9 months ago. Maybe I should get it checked out."

It's not very glamorous, folks.

But still, any reality with Cheeto puffs is a reality we can get behind. Pajama pants are a plus.

Not without a flashlight.

"Oh, not glowing? You mean glowering? Yeah, I have been doing a lot of glowering..."

But stay healthy for the baby! You'll be miserable as crap for nine months but eventually, it'll be worth it! Especially when you raise a smart and healthy kid that can eventually pay for your retirement...

He's gonna be a soccer player!

Or a movie star! A horror movie star, to be more specific. Oh no. I think we can all understand this next one...

"This number is for emergencies only, ma'am."

Again, is this a pregnant woman? Or is it a teenager with the munchies? Who knew that two things so different had so much in common?