30 of the Funniest, Most Ingenius Store Marketing Techniques We've Ever Seen | 22 Words 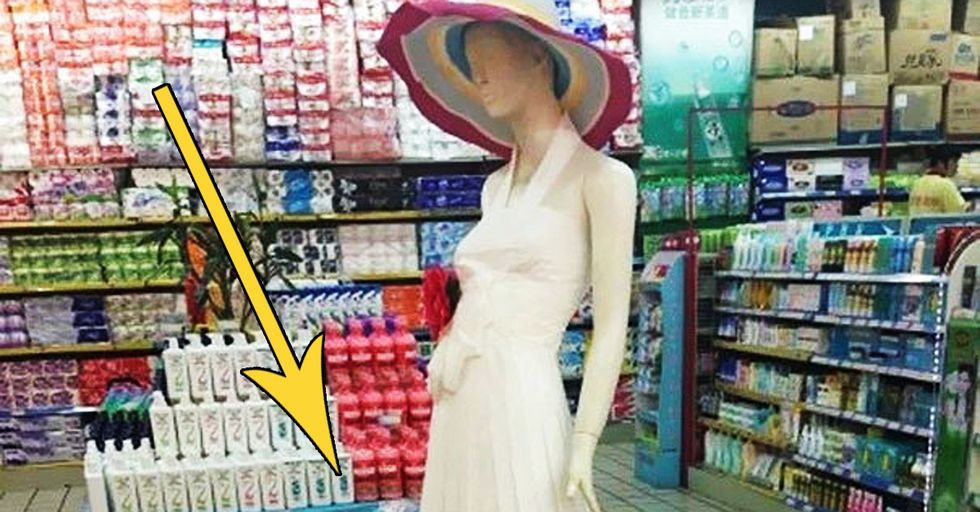 30 of the Funniest, Most Ingenius Store Marketing Techniques We've Ever Seen

With roughly 12.3 bazillion different products out there for you to buy, companies spend a lot of money in an attempt to get you to buy their stuff instead of the lame crap someone else might be offering (at least that's probably what they would call it, as I cannot confirm said lameness).

But marketing can be expensive, which is where guerrilla marking comes in. And no, this does not involve apes, as the name might suggest. Instead, it involves getting creative by spending less money and instead investing in creativity.

You have to admit — some of these are pretty great.

And ready to mingle. Feeling a little bit fruity. As you'll see, wordplay is a huge factor in most of these signs, so if you're pun-averse, take heed. Otherwise, jump in!

Walter White or wheat? The pun cuts two ways on this sign, which means someone must have put in some serious work on this. Not sure if Breaking Bad is the show you want to advertise at the store, but it's your call! Either way, it's on sale!

Someone is hangry. Get that cat a fish. It was only a matter of time before the meme police came into town and put Grumpy Cat on a sign. I have to say the art is top notch, however. A+ work.

In case the song those lyrics belong to is on the tip of your tongue, it's "Sweet Dreams" by the Eurythmics. You'll now sing it all day long. A little cheesy... ...but it works!

Actually, if it lasts longer than four hours, call your doctor. That can't be safe, but you just know that people are going to hurt themselves trying to create a synergy here. Put a cardiologist's number on the receipt to be safe.

Are these only a seasonal item? What about when it's warm? Can they be used for noses on non-snow-created beings? Either way, with that price anyone would be a jolly, happy soul.

Winter is coming, and avocados do, in fact, look a lot like the Game of Thrones dragon eggs. Stock up on the good produce now, my friends. It will be a harsh harvest.

Just pray that it doesn't rain. If so, you could be the subject of bystanders' attention for all the very wrong reasons. Then again, it might just be absorbent! Hmm. Conflicting logic exists between these two thoughts. Just get it to be safe, then pray away the rain.

Everything old is new again. Kids today don't really work on their handwriting enough, let alone with chalk. This seems like it could be a low-tech alternative to tablets! But how do you plug it in?

You say potato. I say, "perfect potato placement." Matt Damon's character in The Martian was kinda closely connected to potatoes in the film. I don't want to reveal too much, but you'll see...

Is this a good idea? I can see this causing some flying fruit in the store. Fortunately, it will just come right back, making cleanup an absolute breeze. Nature's a great toy designer.

Literally. But not figuratively, please. This may be inviting to some misguided souls, but signs don't give you license to ignore decency laws. I hear they're also good for lube jobs.

I guess, working in the meat department, they were able to procure some pepperoni in easy enough fashion. This really is a nice work of art, so enjoy the fruits of a stocker's labor! Back to the grind... Turtle power!

Or maybe you prefer it in warrior form?

Unless my eyes fail me, that looks like a meaty likeness of Mega Man, the video game character. It might not be the most accessible reference, but it's fun for those who get it! Either way, you get pork or beef and a menacing meat ninja. Chop, chop!

But which came first? The chicken, the egg, or the questionable description? I mean, it IS a boneless being, but is it really a chicken? If it is, why are they comparing chickens and eggs if they're the same?

You have to love the artistry here.

Kids aren't likely to dive into fruit, but they just might if it's got a cool animal on it. Since dragons are the coolest animals of them all, it seems like a wise choice. Just don't tell kids they're not real. It would break their heart.

Who wouldn't want to check out this stadium? If you get stuck, you just keep drinking your way through. I suppose it would behoove the store to put a bathroom or a bucket in there as well. Touchdown!

Suck it up, buttercup. You'll be able to treat them at this display, but it doesn't look like you're going to get any sympathy from the mascot. Your whining is not needed here. Take it over to aisle 11, where the Kleenex is.

Is someone trying to tell you something? If you read those boxes in order, you'll receive a hidden, frisky message. Better let that suggestion steep a bit, then get to work on finding out who wrote it. It could be a love connection.

Some of these might fall a little flat with older generations who aren't up on their memes, but they'll still be curious and ask, which could drive a sale. This is the "doge meme," for those unaware. Such tempt. Wow. Many yum.

You can almost see the savings! No, wait. You can't see anything. But that's because the clothes are invisible. No, you're TOTALLY not just buying a hanger. That's totally ridiculous.

Bonus! This is a synergy that makes sense.

Add in a bottle of wine? You've got yourself a deal. I wonder which gender they were targeting here. Well, I guess if a guy really wants that chocolate, he'd make extra purchases, but there are easier ways.

Now there's no question that they're trying to tell you something. Are you picking up the hidden message? It's the letters on the bottles. Now was this the work of a stocker or a prankster? Lettuce all just get along!

Not only do they give you a description of the wine and a musical suggestion, but they also give you easy dinner plans. I would imagine a good cheap Pinot is less rare than a good Nickelback song because they've made decent Pinots after 2003! Win-win!

HULK SMASH CEREAL! I guess this could get pretty punny if you took things to another level by tying together the fact that the Hulk's huge, and you could "bulk" up. There I go over-explaining a joke and ruining it. Hey, you break it, you buy it, green buddy.

When you're there, they treat you like family. As in, they argue with you the whole time. Is that a family you want to be a part of? I guess we'll see how this "campaign" affects business and see if it was a good call.

You're bacon me crazy.

And nobody gets hurt. ALL of it. You better do what Ron Swanson says. My guess is that most everyone will pick up on that Parks and Rec reference. Who doesn't love Ron?

Bob Barker would be proud. Just calling a spayed a spayed. Man, now that we're all punned up with these jokes, we could go all day. But we're nearing the end, so I guess just one more.

Which would your rather put on? I guess it depends on your mood. That said, the long-term planner in me says one is a more sound investment than the other. Unless you're trying. It's all about perspective.