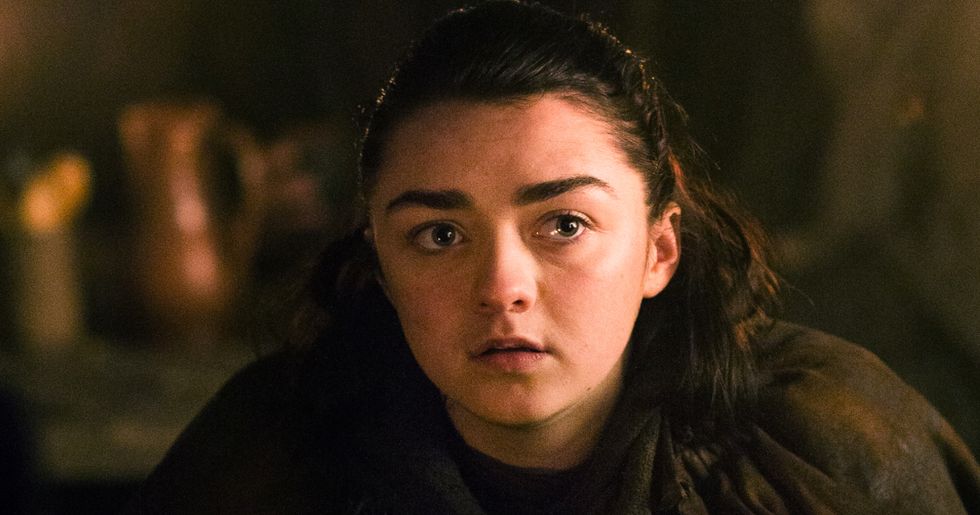 Be warned: Here there be spoilers!

If there's one person you don't want to meet in a dark alley of Westeros, it's Arya Stark, aka the Faceless Man, known IRL as actress Maisie Williams. One of Game of Thrones' deadliest characters, her skill with a sword and dagger is only surpassed by her eerie ability to take on the faces of her victims.

So, recently, when some behind-the-scenes footage of her EPIC sword fight with Brienne of Tarth surfaced, the Internet went nuts.

See for yourself, below.

This is Arya Stark.

Over the seasons, we've watched her go from plucky princess, to struggling survivor to straight-up badass. Point is, Arya is no joke, which plenty of unlucky people have discovered time and time again in GOT.

Arya is not the type of person you want to meet on a dark night...

Remember when she killed an entire hall of men barely even lifting a finger? Or how about that time she left her mentor to die (RIP The Hound, aka Sandor Clegane) without shedding a tear? *Psst! Psst! He survives!* But still...

Arya Stark is a freaking boss.

Seriously, even her mentors, The Hound (Sandor Clegane) and Brienne of Stark, both notable badasses on their own are like – 'nope, not crossing her, not even on a good day.' She even scares her own sister, Sansa, and that's saying something. Remember, Sansa survived Joffrey. Joffrey!

And speaking of mentors...

Meet Brienne of Tarth. Finest warrior in all of Westeros. Definitely the most honorable. Here's a woman who puts a premium on loyalty and honesty - both qualities in very low supply in the Seven Kingdoms. Also, she's a beast with a broadsword.

And this season, Arya and Brienne engaged in an EPIC sword fight at Winterfell.

The actual fight itself!

Can you say AMAZING?

Turns out, Maisie Williams has just as much skill IRL as she does on GOT. Look at that dagger flip. How many times did that thing turn? Once? Twice? Three times? Who knows?! But she caught it like a boss.

No surprise here, as Maisie Williams has had LOTS of training.

Maisie joined the GOT cast when she was only 12 years old. She's been at this for longer than most people have been at their current jobs. Of course she's fighting like a champ.

But she's also had help.

Because Maisie and Gwendolyn are so different in heights, it was very difficult choreographing the fight. Stunt doubles had to be used... And fight choreographers... And trainers... Point is, a lot went into making the fight seem realistic.

That dagger flip, tho!

But the actual execution of all that training was all Maisie. So when Gwendolyn asks her 'Who taught you this?' and she replies, 'No one,' it's no joke. Only she can make that dagger flip look so good.

Which is why people are freaking out on Twitter.

Right?! Look at that thing in action. You can't help but be impressed. Remember when you tried to do that on your own but couldn't because you didn't have the reflexes, the skill, the sheer explosive awesomeness necessary to execute G-level mastery of a dagger? Remember that?

This guy is losing his mind!

So true. The whole scene was epic. Brienne of Tarth's smug assumption that she would win the sparring match. Her surprise at Arya's skill. Her delight when she realized Arya wasn't some homie down the street she could dunk on.

A fight this good definitely deserves a freakout.

We can literally watch this again and again and again, which just goes to show, this is one of the most memorable scenes from GOT. Ever. Can't wait for next season to start!
20%

$9.46 $7.57
Buy Now
See More Deals
We hope you find these deals as awesome as we do! Just an FYI: we may receive a share of sales from links on this page