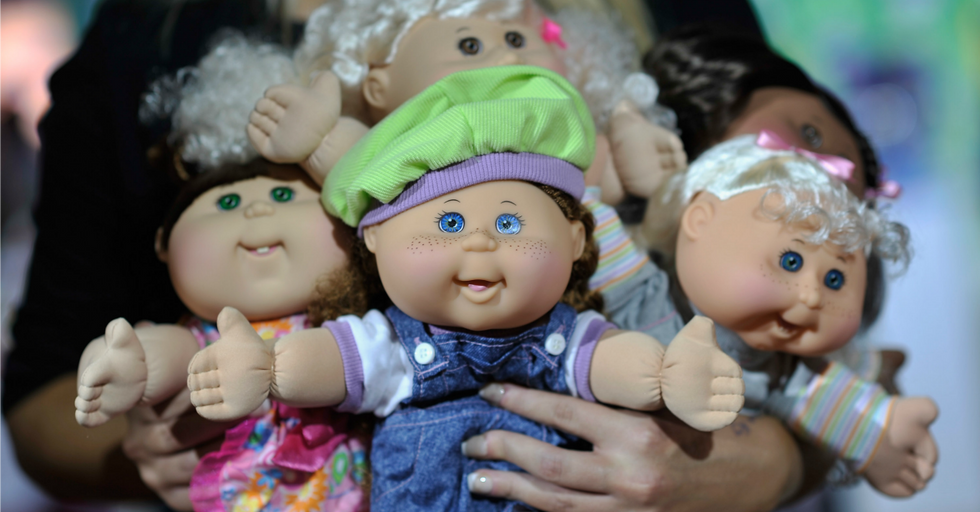 If you rummaged through your childhood bedroom, what types of toys would you find? A couple Furbies? An entire bucket of Beanie Babies? A dying Tamagotchi?

Well, if you find any Cabbage Patch Kids left from your glorious childhood days, your bank account might be very happy you held onto them. The adorable (yet sort of creepy) little baby dolls that you collected as a child could now be worth a pretty penny.

People are starting to sell their prized Cabbage Patch Kid dolls for thousands of dollars. So now you don't have to feel weird about keeping a whole lot of old baby dolls in your basement. It might be creepy, but it sure will pay off.

The start of something new

The first Cabbage Patch doll was released in 1983 and designed by a man named Xavier Roberts. By the end of the year, more than 3 million had been sold, or "adopted."

These dolls became so popular that there were riots that occurred while people waited in line to get their hands on one. You better believe that if little Susie didn't get one for Christmas, there was going to be serious hell to pay.

The dolls were well loved and incredibly popular for quite some time. These dolls with hair full of yarn and rosy, chubby little faces were a hit for kids and families all over.

People also loved that the dolls came in all skin tones and hair colors, appealing to a much wider audience. Kids had lots of options to choose from and plenty of outfits to dress their new children up in.

In 1992, the dolls became the first official mascot of the U.S. Olympic Team. They could not have been more loved by the country.

Each Cabbage Patch Kid came with a birth certificate and adoption papers. It was legit and you had the papers to prove it.

At one point they released a Cabbage Patch Kid cereal. What do kids love almost as much as their toys? Sugary cereal.

I mean this is kind of weird if you think about it? You are eating the faces of these little children? I feel creeped out about this. It's a hard pass for me on this cereal; I'll stick to Lucky Charms.

Xavier Roberts, the creator of Cabbage Patch Kids, used to sign his name on the butt of each doll to signify authenticity. Weird flex, but ok.

It's not just a toy, it's a lifestyle. There are multiple Instagram accounts where you can follow along in the life of a Cabbage Patch Kid as if they were a real person. I'm starting to think people might believe that these dolls are real kids.

People cherished these dolls and would save them at all costs, even if there was a tornado.

Get in the know

Vice did a full-fledged documentary on the craze of Cabbage Patch Kids and it has over one million views on YouTube. Clearly, people are interested in the history of these dolls and are curious to learn more.

Do you still have yours?

If you went through your childhood room, would you find any of these dolls in your closet? If you do have any, you could cash in and make some serious money.

There are some outstanding features on these dolls that could heighten its worth.

The original Cabbage Patch kids were completely soft, even their heads. It was more of a plush doll and not a plastic one. These were the dolls that were originally called "Little People" before their names changed to Cabbage Patch Kids.

If your CP Kid has really large thumbs, that's a good sign. The originals had noticeably larger thumbs than the newer dolls. Keep an eye out for those big thumbs because it means big money.

@GarageSaleTrail All the Cabbage Patch Kids for sale at my Garage Sale Trail on this wonderful warm day. http://t.co/AHiZPPECzU
— Karen Fox (@Karen Fox)1414198865.0

Did you keep it in the box? If it is, keep adding those commas because the price value will go up even more.

If your doll has yarn for hair, that's a good sign. The very first dolls used yarn, unlike the newer dolls who have the synthetic hair, kind of like the kind you would find on a Barbie doll.

Check the butt. Yes, you heard me right. If your CP kid has an authentic signature and not a stamp, then the price of it goes up even more. The associated date should be next to the signature and that will give you a better idea as to how vintage this doll is.

If your doll was ordered from overseas, that will also increase its price.

If your CP Kid checks off all these qualifications, then there's a good chance you're going to cash in. But how much money are we talking about?

This vintage doll, with a real Xavier signature, is selling for $9,700 on Ebay. It's one of the very first dolls and yes, this price is serious.

This CP kid is being sold for $9,000 on Ebay. It comes with the original paperwork, diapers, and a rocking chair. That diaper must be made of gold.

The owner didn't include the year of this doll, but it is selling for $3,500 on Ebay. She's legitimate and has the butt signature to prove it.

A James Dudley doll in mint condition, meaning it hasn't been taken out of its box and has its original papers, was selling for $3,000 on Ebay.

Another vintage Cabbage Patch Kid is being sold for $2,915 on Ebay. For some reason, this one only has one tooth which is hilarious to me but apparently, it makes the value go up.

An original Cabbage Patch Kid with blonde yarn hair is selling for $1,995 on Ebay. This is not fake news people.

A CP Kid dressed as Tom Sawyer from Adventures of Tom Sawyer is selling for $850 and is considered unique because it was a special edition. I am all about respecting the classics but this feels a little over the top.

A pair of fraternal Irish twins were being sold for $850 online. They better bring a pot of gold with them because this is getting out of hand.

Aren't we all? Who knew these dolls would be worth so much someday?

Do you want any more?

There are a whole lot of other Cabbage Patch Kids being sold online; feel free to head to Ebay, and look at all the other options. You will get more and more confused as you scroll.

Other ways to get rich

In your wild attempts to find your Cabbage Patch Kid, you might have come across some other classic toys. Those could also be worth quite a lot of money, so don't throw those away either.

Some Polly Pocket dolls and accessories are being sold on Ebay for $3,000. It seems crazy, but people will pay a high price for this stuff.

You cannot make this stuff up. There is a collection of Pokemon cards being sold for $249,000 on Ebay. You better find all those old cards and collect your money.

A vintage Furby collection is being sold for $42,000. I can't wait to tell my dad that I'm not crazy for holding onto these toys for years. I'm about to cash in folks.

Even if you forgot to feed yours for years, you can still reap some major benefits from this toy. One packaged Tamagotchi is being sold for $4,000 online.

I used to have a trunk load of these guys. If I would have kept them, I would be rolling in the dough right now. This specific Beanie Baby has a starting bid of $750,ooo, on Ebay.

We may be the weird generation that started eating Tide Pods but if we were smart and held onto some of our old toys, we may be getting very rich very quickly.

Share this article with your childhood friends and collect that cash. You deserve it.
20%