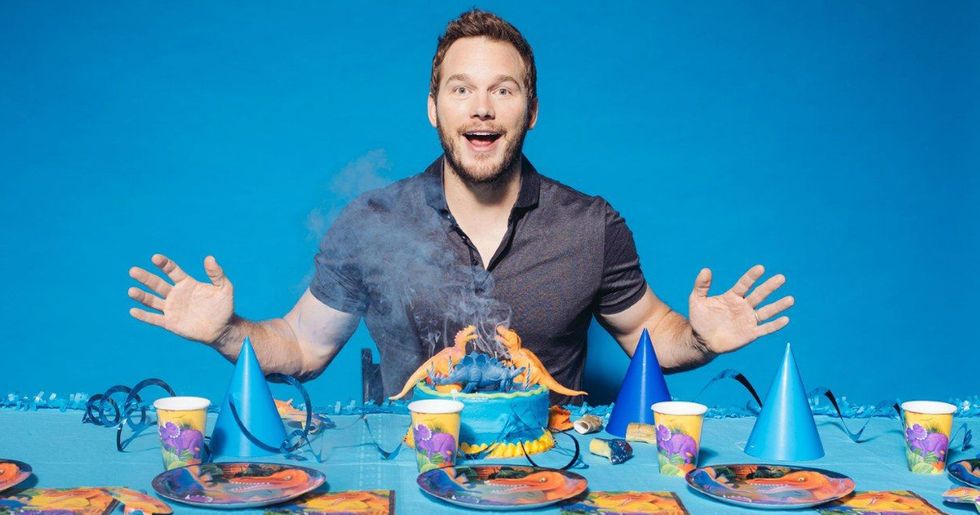 While the rest of us mere mortals age with forehead wrinkles and decreasing metabolisms, celebrities seem to be going backward. They're all Benjamin Button-ing before our eyes. Have you seen Jennifer Lopez lately? She looks younger than she did ten years ago! Oh, to be rich and famous and have access to the fountain of youth.

But at the end of the day, celebrities are just human. And they're getting older like the rest of us. There's nothing to be ashamed of when it comes to aging – in fact, it's a pretty beautiful process. Do you really want to go back to being 20 and broke and living off of ramen noodles?

So, despite the fact that celebs sometimes seem as if they've been the same age for a decade, they do, in fact, get older. Shocking, isn't it? Here are celebs that you might be surprised to find out are turning the big 4-0 this year.

The eldest Kardashian, like the rest of us, was once a victim of skinny brows and a terrible spray tan. Oh, Kourtney. What are you doing girl?!

But this year, the reality star is turning 40 and looking hotter than ever.

Kim may have called her the Kardashian who is the "least interesting to look at," but I beg to disagree. Kourtney is killin' the game.

Who is that curly-haired baby?! Less Star-Lord, and more "guy next door who loves a keg stand."

Talk about a glow up!

I guess when you become a huge action star in several major blockbusters, 40 tends to look quite good on you. He's come a long way since his Parks and Recreation days, that's for sure.

The queen of romantic comedies has had an amazing career. From writing and co-starring on The Office, to starring and creating her own TV show, to being BFF with Oprah, this woman can do it all.

Early '00s style was everything. If Pink could rock a fishnet tank top under a regular tank top and a fedora on top of her head, then she could do anything.

If you haven't seen it yet, there is a very adorable video of Pink and her daughter singing The Greatest Showman together, and it will melt all of your cold hearts.

What a precious, dorky little angel. How could Pam not fall in love with Jim, when he looks like that?

The actor and director will turn 40 this year, proving that it's possible to get better with age.

The beard! The hair! The smize! Tyra would be proud.

In case you weren't aware that this picture was taken in 1999, the spikey, bleached-blonde hair is a pretty strong indicator. Oh, what a time the '90s were!

The former member of *NSYNC has clearly aged wonderfully.

40 ain't nothing but a number! Personally, Lance was always my favorite member of the boy band.

When your mom is Goldie Hawn, you've basically hit the gene pool jackpot. Kate Hudson has always been the absolute cutest.

Can we all have her beauty secrets?

It's like somebody carved this woman out of sunshine. Meanwhile, I often feel like a gremlin that's been fed after midnight. Celebs truly live their best life.

If you weren't Team Seth Cohen, who even were you? It was impossible to not have a major crush on the dorky star of The O.C. His boyish good looks and wit? SWOON.

And he's still got it goin' on.

A total dreamboat at 40 years old. And the fact that he's married to Leighton Meester aka Blair Waldorf? It's what teen romance dreams are made of!

Emo boys, unite! Can you believe the Fall Out Boy singer is turning 40 this year?

The musician turns 40 on June 5th.

Who else was obsessed with Fall Out Boy? I truly can't believe this guy is going to be 40 this year.

Oh, em gee. Do you remember Adam Levine looking like this tiny man-child? I sure don't.

Believe it or not, the singing hottie is turning 40 this year.

I mean, it makes sense. Maroon 5 has been around since the late '90s and early '00s. Where did the time go?

Well, it's been confirmed. Jason Momoa has always been absolutely gorgeous.

Do all celebs just get better with age? It certainly seems that way.

Claire Danes has been acting for most of her life. Who else was obsessed with My So-Called Life? It was the epitome of teen angst. Also, there was lots of flannel.

She's had an incredible career.

But no matter how many awesome roles she plays, she'll always be Angela Chase to me. (Seriously, they canceled that show way too early! Bring it back! Bring it back!)

It's been quite the exciting last couple of years for Tiffany Haddish. The hilarious queen is truly killing the game.

She'll be celebrating her 40th birthday on December 3rd.

I wonder if each guest at her birthday party will get a Groupon of some sort? That would be a dream.

The Scottish actor turns 40 on April 21st. Okay, but he looks better now than he ever has. Right?! Everyone looks great with a little salt and pepper hair.

Baby-faced Busy is everything. Long before she was the queen of the late-night show, and Instagram, she was a surly teen on Freaks and Geeks.

She's turning 40 this year and she's more fabulous than ever.

All hail queen Busy! Share this with your friend who's afraid of aging (and tell them they have nothing to worry about!)