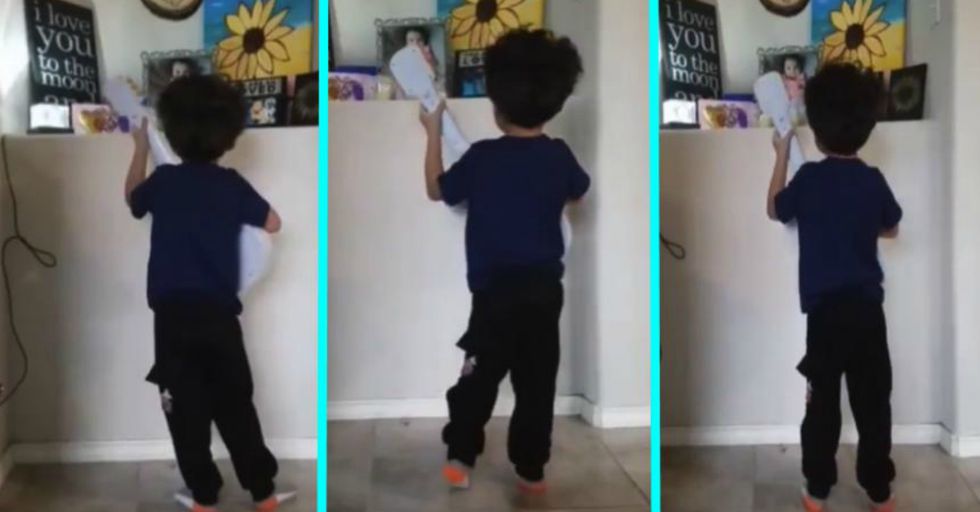 It's easy to feel cynical about the world we're living in. Just turn on the news or log onto Twitter and it's impossible to not feel overwhelmed by how depressing everything is. We've all said goodbye to 2017, and we've ushered in a new year. With that, comes new hope.

Which is why every time we stumble upon a story that makes us weep tears of sheer emotion, we can't help but think that maybe everything is going to be fine. Take this recent viral video, for example.

It starts with the heart-wrenching song "Remember Me" from Disney's Coco released at the end of 2017.

If you've seen this movie, then you know just how emotional this song is. Just listening to it once can send even the toughest of human beings into a spiral of sobbing.

Get your box of tissues ready...

Samir Deais of San Antonio, Texas has uploaded a video of his son singing the song to the memory of his baby sister. We're not crying, you're crying! Okay, we're all crying.

The video was uploaded on New Year's Eve and was a truly beautiful way to ring in 2018.

As Deais wrote, his son is only 4-years-old and yet he understands the beauty of singing to his late little sister. Deais says his son didn't know anyone was recording, he just wanted to sing to Ava.

A few days later, Deais posted another tweet regarding the video.

Since posting the video on New Year's Eve, it's been played more than 1.3 million times and has been retweeted over 47,000 times. "I couldn't me more thankful. Thank you to everyone from our little family! What a 1st birthday baby girl!" Deais wrote.

Hi, yes, we can't take this and our hearts are melting.

"All this ugly in the world and these kinds of things make it still seem beautiful in the dark times," Deais said in a recent interview. We can't help but agree with Deais. It's little things like this sweet video that make the dark days a bit brighter.

The internet obviously feels the same.

Not only did the video become viral, but many folks on Twitter responded to it with emotional GIFs. And if that isn't the love language of 2018, what is?

We're pretty sure every single person who logged onto Twitter and saw this video dissolved into tears.

You'd have to be a robot not to. "All these blessings for our small family make us very humbled and thankful and blessed," Deais said.

We very much relate to the person who posted this response.

It's very easy to get weighed down by whatever Trump's rants on Twitter include, or horrible news of what YouTube stars are doing. It's pretty healing to see a story like this go viral. In 2018, we need it.

The video continues to be retweeted and liked on Twitter, and it's wonderful to see it spread joy around the web.

We can all agree that we need more joy in 2018. May this be just the start.