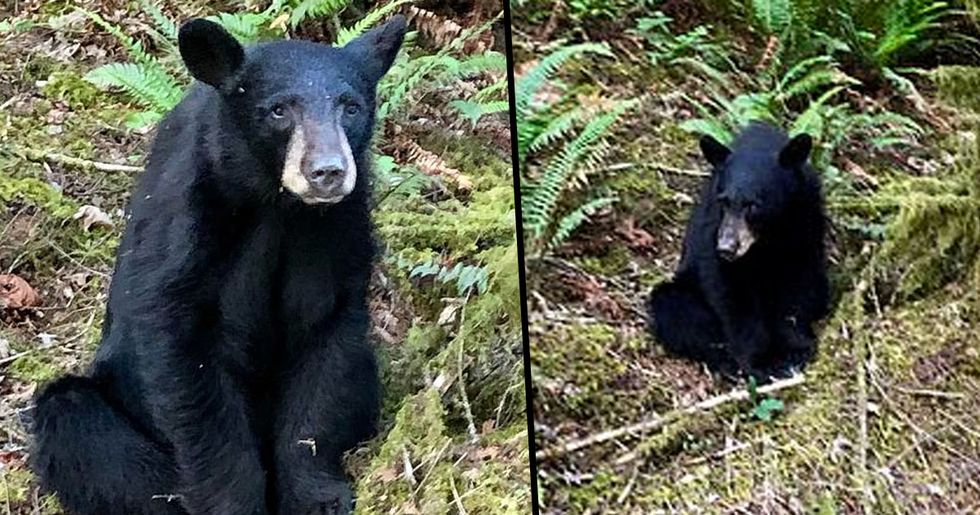 Human interaction with wildlife is increasingly becoming a problem, with people wanting to interact, feed, and even touch wild animals all for the sake of their own gratification and, more often than not, for social media.

In usual cases, wild animals keep their distance from humans and heavily human-populated areas for the obvious reason that they are animals that do not want to be touched or bothered. They want to go about doing their own thing, as their instincts tell them to.

But some people just can't resist interrupting a wild animal. The more human interaction that an animal experiences, the more reliant that animal will become on our species. A black bear recently fell victim to this bothering, and the consequences are heartbreaking.

Read on to learn about the fate of this little black bear and the harrowing effect of human ignorance.

The Black Bear is native to North America and is one of the continent's smallest and most widely distributed species of bear.

The bears are popular in national parks and forested areas.

Scoggins Valley Park in Oregon is a popular home to black bears and many reside in large and secluded areas such as these.

Bears have a shy and gentle nature...

Despite their size and their rather intimidating claws and teeth, bears are generally shy and gentle animals. They tend to avoid human interaction as much as possible, but with them being animals that have to search for their food, they will be easily bribed with any kind of food that a human may have to hand.

... When one of us human beings is stupid enough to invade their territory and get way too close to their personal space. Experts say that bears have something called a "critical space." This is an area around them that they may try to defend; when something enters this space, the bear is forced to act - to either run away or become aggressive.

Each species of bear has evolved strategies for survival.

For instance, grizzly bears often reside in habitats far away from heavily populated areas that don't bring a lot of human interaction, such as heavily wooded forests or lakesides. Black bears, on the other hand, are much more tolerable to human interaction and aren't as aggressive towards our species in the way that grizzlies are.

This doesn't mean that us humans have the right to interact with them, though.

A black bear's tolerance towards human beings certainly doesn't mean that we can bombard their space and interrupt their daily instinctive activities by feeding them whenever we feel like it.

A black bear cub has recently fallen victim to us humans...

People may often think that they're doing the right thing by leaving out food for a baby black bear that appears to be by itself. They will pity the "cute baby bear" and feel justified in leaving junk food on the side of the road for it to eat... this should not be the case at all. A young black bear cub was making repeated appearances in the Scoggins Valley Park in Oregon...

Washington County Sherriff's Office and the Oregon Department of Fish began receiving numerous calls on June 4th about the young black bear who had made many appearances near Hagg Lake, away from its usual sheltered accommodation in the woods nearby.

Despite the Sheriff's words of advice, people chose to get closer to the bear.

Due to its gentle temperament, members of the public began posing for pictures with the bear and posting them on social media. People left food for it to eat; perhaps due to the ninety-degree heat, people felt that the bear was incapable of hunting for itself.

Wildlife biologists got involved at that point.

Kurt License and Doug Kitchen, two local wildlife biologists, tried to trap and relocate the bear, but it was found to be eating trail mix, cracked corn, and sunflower seeds. Black bears are omnivores and their diets vary throughout the seasons. They should never take food from humans as they subsequently develop a dependence on us feeding them rather than hunting for their own food as any wild animal should do.

"A classic example of why members of the public shouldn't feed bears..."

Kurt License spoke to OregonLive and said that "This is a classic example of why we implore members of the public not to feed bears. It was very clear that the animal was way too habituated."

When the wildlife officials approached the bear...

The cub did not give any indication of fear as a "normal" wild bear would. It didn't move or run away when License and Kitchen approached it, which was a strong sign that the bear had become way too used to human interaction, which would ultimately pose a danger to anyone who would come into contact with the bear in the future.

"A human health and safety risk..."

The wildlife officials deemed the bear a "human health and safety risk," and the sad decision was made to have it removed from the area. The baby bear was sadly put down as it was too habituated to cope in the wild and too much of a risk to the public to stay where it was.

The consequences of allowing human contact with wild bears...

Rick Swart of the Oregon Department of Fish and Wildlife said that if the bear had not been habituated and grown a tolerance to human beings, it could have been safely relocated without having to be shot.

This tragedy could have been prevented if people had taken notice of the warnings about feeding wild animals and if us humans were capable of not being so self-centered for once.

There's a reason that people are encouraged to never feed any form of wildlife...

Wild animals are born with an instinct to locate and hunt their own food. They do not need the assistance of humans to source their next meal.

The Deputy of Washington County Sherriff's Office had his say:

Brian Van Kleef said in a statement regarding the incident: "We're sad it ended this way." "Obviously no one wants to see a bear get killed, especially its many human fans. But I think it was the human interaction that ultimately led to its tragic end."

Oregon has a history of black bear incidents...

Since 2007, seven black bears have been euthanized, and residents in the district have killed thirty bears under a law that allows homeowners to shoot the animals if they become a nuisance to their properties.

And, of course, people aren't happy about this.

This user, alongside many others, took to Twitter to express their anger: "Shame on YOU!" Many are expressing their frustrations at the fact that members of the public are repeatedly feeding these wild animals, despite being fully aware of the fate that it leads the bears to. There's also been a lot of anger channeled towards the Washington County Sheriff's Department for giving the all-clear to euthanize the bear.

Wild animals are "wild" for a reason.

It's crucial for wild animals to be left alone to allow their instincts to guide them through their lives. They do not require the assistance of humans in order to feed, no matter how "hungry" they may look. Their instincts are there to help them to survive and, at the end of the day, it's the circle of life. Leave wild animals alone, and they'll do exactly the same to you.