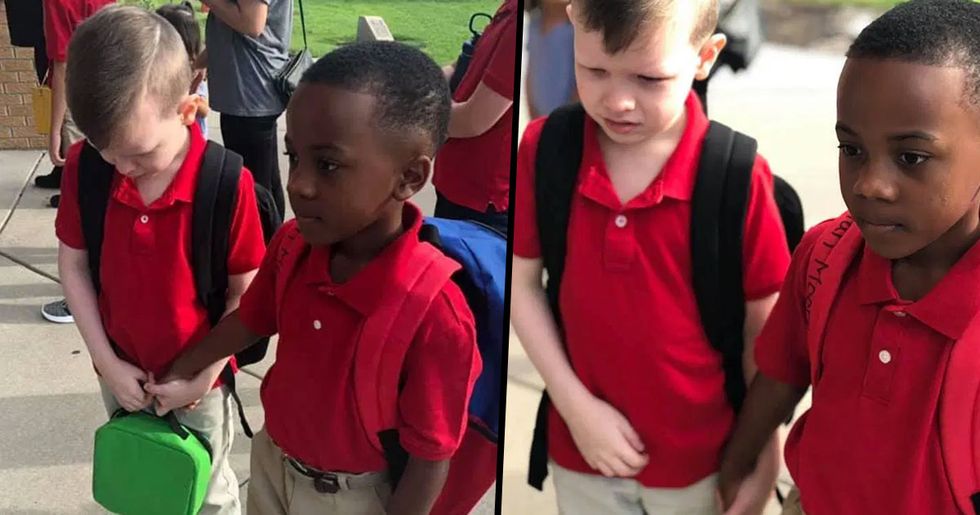 Starting school can be daunting for anyone. I'm not even talking about the first day of school... every day in every year from first grade til senior year, returning to school at the end of the summer filled me with a heavy sense of dread. I hated the crowds, the routine, the rules, the cliches, all of which increased my anxiety tenfold.

Some kids wet the bed, I cried every day before school until I was about eight or nine. Whoever said that childhood was the best time in their lives clearly did not dislike school as much as I did.

I can't even imagine how difficult it is for a kid with autism to cope with the challenges of school. Being different is a good thing - heck, Bill Gates, Steve Jobs, and Andy Warhol were all on the autistic spectrum, but those guys made their success in the real world. School is a completely different playing field.

That's why it's so nice to see a story going viral which even made school-phobic me think that there is hope for those locker-lined walls yet.

I remember the feeling that you get when you're in school that it's the be-all and end-all, that your life will begin and end there - you can't imagine a time after it. This all-consuming feeling makes school seem as though it's the most important thing in the world. It's reassuring, and perhaps important, to note that plenty of successful figures in popular culture hated school. But, just because no one wanted to sit with them in the cafeteria, their lives weren't over. In fact, those early rejections from their peers probably strengthened them for future challenges, making them the successes that we see today.

Kristen Stewart did movies as an excuse to get out of school.

Discussing school and her early career in the movies, Stewart said: "I'm glad I could do those films, and I was glad to leave school. I couldn't relate to kids my own age. They are mean and don't give you any chance."

Taylor Swift was not popular in school.

It may be hard to imagine Taylor Swift being a bit of a loner at school, considering how popular she is now. Swift never seems to go anywhere without an army of gal pals ready to party, but, back when she was a kid, things were very different. She recalled, "I remember when I was in school, the whole reason I started writing songs was because I was alone a lot of the time. I'd sit there in school and I'd be hearing people like, 'Oh my god, this party that we're going to is gonna be so awesome on Friday. Everyone's invited except for [Taylor].'"

Well, she's certainly making up for it now...

Taylor Swift's summer parties are legendary in tinsel town. I bet she floats around on an inflatable pink flamingo, in a pool filled with sparkling wine, surrounded by hundreds of party-goers thinking: "look at me now, Courtney, look at me now!"

Selena Gomez was bullied every day of elementary and middle school!

Can you believe it? I guess it's true that the coolest, nicest people are the ones that become targets to bullies. Talking about her school experience, Gomez stated: "I was bullied every second of every day in elementary and middle school." It's safe to say that Selena seems to have a great support network around her now and is living her best life.

Chris Colfer considers where he would be if he hadn't had a cellphone in school...

When you get bullied, you can wind up getting thrown in trash cans, lockers, you name it. Chris Colfer recommends having your cell on you at all times to make sure you can call someone if you find yourself in a sticky situation following a cruel "joke." The Glee star stated: "I was very tiny. I spent most of my time stuffed into lockers. Thank god for cell phones, or I’d still be in there."

Even Batman got beat on in high school.

That's right, Christian Bale wasn't always top dog. When he was a kid, he was a prime target for bullies. He recalled: "I took a beating from several boys for years. They put me through hell, punching and kicking me all the time."

Perhaps the bullies pushed Bale to become the tough guy that we see today...

Maybe if he hadn't got beaten on when he was at school, he'd be doing something else with his life. Maybe he'd be a landscape gardener, run a bed and breakfast on the coast of Pembrokeshire? But, instead, he built up his strength and became one of the highest-grossing action heroes in cinema history.

Jessica Alba didn't fit in with the other kids in school.

You wouldn't think that Jessica Alba would have had such a hard time in school, but, as this list reveals, the best people seem to! Speaking about her school experience, Alba said: "I'd eat my lunch in the nurses' office so I didn't have to sit with the other girls. Apart from my being mixed race, my parents didn't have money so I never had the cute clothes or the cool backpack."

There are so many factors that can make you stand out in school.

And if there's one thing that you don't want to do when in school, it's stand out from the crowd... We feel so much safer in the herd!

Poverty can single a kid out.

Just like with Jessica Alba, being the kid that came from the family with no money can make the adventures of school all the more difficult. You can't afford to go on field trips, you don't have the right clothes...

The content of your school lunch box can make you a laughing stock.

It seems ridiculous to think now, but it's true. Kids seem to think that what you have in between your slices of bread says something about you as a person. I remember when I was at school, the kids who had boxes of raisins were nerds and the kids with peanut butter sandwiches were picked on for being poor. Heck, I can remember how one boy was repeatedly ridiculed because his mom used to pack his lunch in a plastic bag because they couldn't afford a lunchbox. As I said, kids can be cruel.

It seems bizarre that having a disability can cause people to be intentionally cruel to you, but, in the throws of youth, kids don't end to stop and think about what they are doing and will be mean to anyone that they deem vulnerable. My little sister is dyslexic and she had a really hard time in high school. Kids would tease her for her slow reading and mock her when she was made to read aloud. It can be pretty traumatic to be made to feel dumb in school.

When April Crites' son, Connor, was born with autism, she worried about his future.

Autism isn't a curse. As I said earlier, some of the smartest people in the world, people who have made the biggest technological advancements of the modern age, have been autistic. Nevermind the modern age, going back even further, people with autism seem to have been the pioneers - take Mozart, for example! That being said, a disorder like autism affects social skills, thus making school - wherein you are constantly in social situations - challenging for people on the spectrum.

Courtney Moore was not worried at all about her son, Christian, starting school.

The mother of two knew that her son would have no trouble making friends because he is such a warm, fun-loving boy. On the first day of school, he proved just what a great kid he is.

Sometimes, all we need is a helping hand...

At the school gates on the first day of the new year, Connor Crites was overwhelmed by the situation and began to cry. Courtney, Christian's mother was there and she recalled: "I saw [Christian] on the ground with Connor as Connor was crying in the corner and he was consoling him. "He grabs his hand and walks him to the front door. We waited until the bell rang and he walked him inside of the school."

"I got happy tears."

Talking to local news station, KAKE, about that morning, Connor said: "[Christian] was kind to me. I started crying and then he helped me. And, I was happy... He found me and held my hand and I got happy tears."

All it takes is one act of kindness to build a friendship that could last a lifetime. According to Connor's mom, the two boys now spend all of their time together. She said that, after that first encounter on the schoolyard, "the rest is history. They have an inseparable bond."

"I fear every day that someone is going to laugh at him."

The two moms have bonded over their son's friendship.

After sharing the story of Connor's good deed on Facebook (like any proud mom), Courtney received a message from April, Christian's mom, asking her to thank her son for being so kind to her boy.

Since the story went viral, the moms have set up a Facebook page called "Christian & Connor Bridging The Gap."

via: Facebook/Christian and Connor Bridging The Gap

They have explained that the purpose of the Facebook page is to further spread the message of love and unity. The page explains that its goals are to "bring peace & unity through our campaign, to shed positive light through acts of Kindness and love. There is no color in love!" We wish them all the luck with their campaign and hope that the boys enjoy a fantastic school year! Ready for another heartwarming story of unity? Keep scrolling!