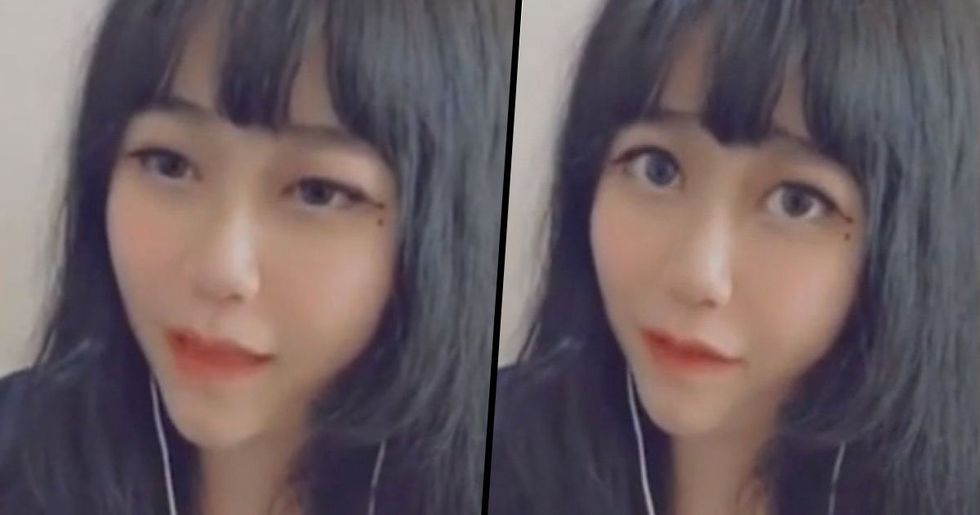 It's a universally accepted truth that, nowadays, anyone can be anyone, thanks to the power of the internet. When you can hide behind a screen, you can polish your entire life to make it seem far more glamorous and exciting than it is in reality. But some people really push things to the limit - and one Chinese vlogger is a real testament to this.

A Douyo personality known as Your Highness Qiaobiluo has amassed a large number of followers on the platform, thanks to her gaming prowess - and, let's face it, her cute appearance. But a glitch in the system last week caused the filter she'd been using to slip - and it revealed that, far from being a gamer-ingenue, Qiaobiluo was, in fact, an almost sixty-year-old woman. Wanna see? Keep reading.

On the internet, anyone can be anyone.

It's important to remember that, lurking behind the screen, could be someone quite different from who you're imagining.

Which has led to a pretty strange internet phenomenon.

Popularized by the documentary and MTV show, the term "catfishing" refers to any person presenting as somebody else on the internet - often for romantic gain.

While this shouldn't surprise us, it often does.

But the latest in a long line of unmasked catfishes is amongst the most shocking yet.

This is Your Highness Qiaobiluo.

The internet star is popular on Chinese gaming platform, Douyo, where she has over 130,000 followers.

For a long time, she's had a loyal following.

And while this is purely speculation, it's likely that a large amount of her popularity is based on the fact she's very youthful and conventionally attractive.

And it's not just fame that she's gained.

Douyo also allows followers to make anonymous donations to their favorite gamers - and, for bigger stars, it can be a lucrative business.

But there's one thing that these fans should have counted on.

Even in an age wherein the proliferation of face filters is the talk of the internet, nobody suspected that someone had been using it for fiscal gain.

Because it's been revealed that Your Highness Qiaobiluo isn't what she seems.

Rather than a teenager interacting with her peers, this Douyo star was actually far older than she'd presented.

Here are some more images of the gamer.

It's hard to deny that her cute appearance (when combined with her prolific gaming style) ensured that the internet wouldn't be able to get enough of her.

For (now obvious) reasons, she'd been shady about real-life meetups.

The reason she gave?

"After all, I’m a good-looking host." Well played.

But on July 25th, the unthinkable happened.

During one of Qiaobiluo's many streams, the Douyo app underwent a glitch.

And the results of the glitch?

Well, it caused all filters to fail - which meant that Qiaobiluo's mask slipped, and her true identity was revealed.

The audience had an immediate reaction.

The gamer didn't even realize that her filter had slipped until people started leaving the chat and canceling their donations.

So here she is: Your Highness Qiaobiluo unmasked.

We have to say, it's not as horrifying as it initially sounded - in fact, she looks pretty damn good for fifty-eight.

But after the initial shock?

Fans of the gamer appear to have gotten over it - and her subscriber count has actually risen since her true identity was revealed.

In fact, she may have gained more fans in the process.

She's now gained the affectionate nickname of "Granny" in the Douyo community.

And she's now set her sights even higher.

After conquering the gaming world, Qiaobiluo now wants to venture into the music industry, hoping to one day become a famous rapper. Because, of course.

The internet applauds the way that she managed to game (no pun intended) the system, tricking everyone into becoming of a fan of her based on their own societal preconceptions.

Although, perhaps we can all learn a valuable lesson from Qiaobiluo.

Even though we can pretend to be someone else online, it doesn't necessarily mean that we should - in fact, our authentic selves might end up being even more popular! And for more crazy facial transformations by a Chinese vlogger, keep scrolling.