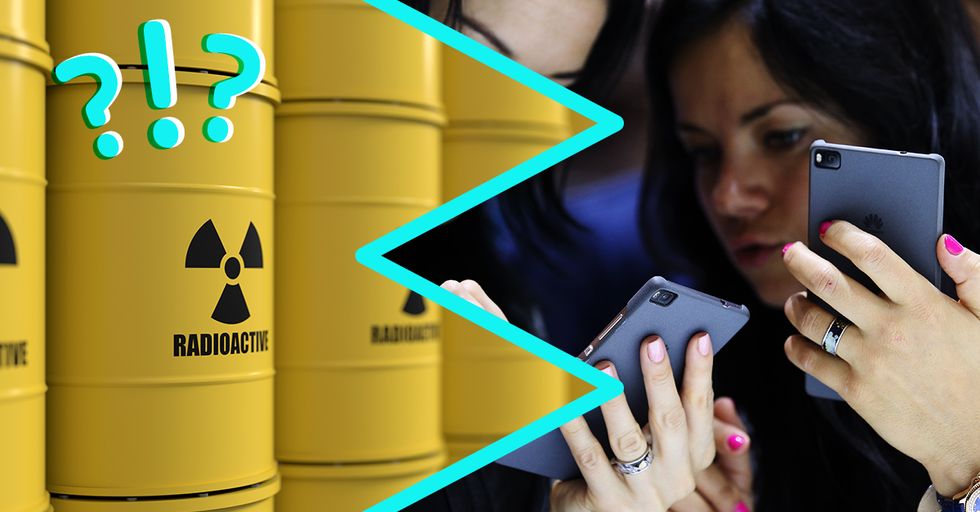 Don't deny it — we are all constantly on our cell phones. You're most likely reading this on your cell phone right now!

Cell phones are the best for keeping in touch with friends and family, learning new information in a matter of seconds, and most importantly, killing time on the toilet. But do we know exactly how our cell phone use is affecting our physical health?

Cell phones are ubiquitous these days.

Everybody has one. In fact, 95 percent of Americans use cell phones on a regular basis. Ninety-five percent!! That means we are all chock full of radiation and there's no turning back. Just kidding! Maybe.

The fact is cell phones do release radiation, and we should at least start to think about how it could be affecting our bodies.

Cell phones put out radio frequency (RF) energy, which could possibly have an effect on our health. RF energy is a form of electromagnetic radiation that's also used by TV and radio transmitters as well as microwaves. While it's not as damaging as other forms of radiation — like X-rays or UV rays — it could still pose a health risk.

In the spirit of educating people to be more responsible consumers, the California Department of Public Health has released guidelines about how to reduce exposure to cell phone radiation.

It's a list of practical things we can all do to limit our exposure. While throwing your cell phone into the ocean and avoiding all RF energy probably isn't an option, we can make do some tiny things to make ourselves less of a target for radiation when we use our cell phones.

We all kind of knew that using cell phones could pose a health risk, but we haven't exactly jumped at the chance to learn just how damaging it can be. Now people are starting to panic.

California just released some tips on avoiding cell phone radiation and now I am having a panic attack
— Soumya (@Soumya)1513193393.0

Although there isn't conclusive data yet, some studies suggest that health problems like brain tumors, low sperm count, headaches, memory loss, hearing loss, and insomnia could be connected to cell phone use, according to CBS News. So, while it's not the time to resign yourself to a cell-phone-induced death just yet, it might be smart to start taking some of the CDPH's advice.

At this point there's no way to avoid cell phone radiation unless you go completely off the grid. And let's be honest — even if you live your life as a wanderer in the woods, chances are you'd eventually wander straight into a cell phone tower. So, don't panic just yet, but you might want to take a look at this concrete list of things you can do to reduce exposure to cell phone radiation.

First up on the list from the CDPH: Don't hold your cell phone up to your head.

When at all possible, use the speakerphone function or a headset (wired or wireless). Headsets emit much less RF energy than cell phones. This makes sense. Be the cool dude in the headset that we all know you want to be. It's for health reasons after all.

Send text messages instead of talking on the phone.

Wahoo!!! Now we have an excuse to do what we all always do anyway. We now have a way to legitimize our social anxiety about talking on the phone. Text instead! For your health! (Watch out for carpal tunnel syndrome from all that typing, though. Man, nothing is good for you.)

If you are streaming or downloading large files — step away from the phone.

Keep the phone away from your body while you're downloading those episodes of New Girl to watch on the plane. Your phone uses more energy in these cases, so you want to be as far away from it as possible during these times.

Carry your cell phone in a backpack, purse or bag —not in your pocket, bra or on your belt.

We know it's tough, but say goodbye to your little iPhone buddy while you're walking to work. You don't need it, and it's healthier for your phone to be in your bag.

Avoid using your cell phone when the signal is weak (when only one or two bars are displayed).

Sometimes this is unavoidable — obviously, if there is an emergency and you don't have much service you should use your cell phone — but in an ideal situation, you should wait until you have full bars to use your phone. When the signal is weak, that means your cell phone has to put out more RF energy to connect with cell towers. More RF energy equals more radiation. But what about when you're traveling? Read on to find out...

Try not to use your phone when you are in a fast-moving car, bus, or train.

This is similar to the weak signal sitch. If you're moving fast, more RF energy has to be used to maintain a connection as your cell phone switches to different cell towers. Now this might seem impossible — because everyone and their mothers immediately pull out their phones when they're on the bus or train — but in these situations, it's ideal to stick to airplane mode and get down and dirty with some solitaire (or whatever game the kids are playing these days).

Don't watch movies while they're downloading.

Wait for large files like movies to download, and then put your phone on airplane mode while you enjoy them. You don't want any other distractions anyway while you're trying to watch Gilmore Girls!

Don't sleep with your phone in your bed or near your head.

This is one we all probably do. Maybe you even put your phone under your pillow when you go to sleep hoping a fairy will come and transform your Insta account overnight. But don't! Ideally, your phone should be in airplane mode and at least a few feet away from your bed while you sleep.

Take off your headset when you're not on a call.

Yes, we all know how important and business-y you look in your headset, but take it off. Headsets, whether they're wired or wireless, release a small amount of RF energy even when they're not in use. Better to be safe than sorry!

And finally, don't rely on "radiation shields" or other products that claim to block RF energy from cell phones.

According to the FTC, they don't work. In fact, products like shields that interfere with a phone's signal may cause it to emit more RF energy because it's trying to stay connected. This could increase your exposure to radiation and have the opposite effect. So in conclusion — don't panic. Maybe don't put your phone under your pillow anymore. And hit the speakerphone button when you can. If we're going to die from RF energy from cell phones, at least we'll all go down together. 2017 sucked anyway. Happy New Year, everybody.