People Reveal the Creepiest Things Kids Have Ever Said to Them, and They're Hilariously Weird | 22 Words 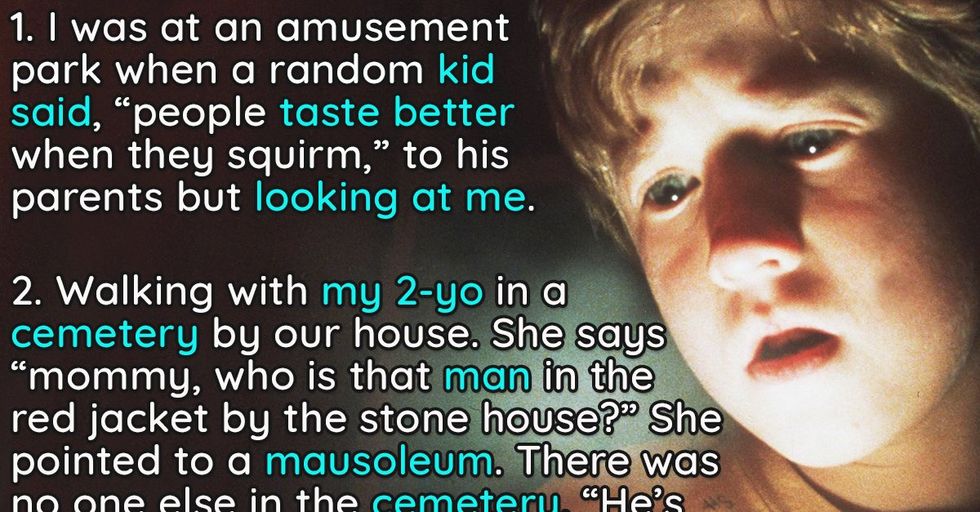 People Reveal the Creepiest Things Kids Have Ever Said to Them, and They're Hilariously Weird

Kids can be cute, but we don't talk enough about how damn creepy they can be. Kids have no filter, so they often say exactly what's on their mind, and sometimes that stuff is scary enough to spook you into next Tuesday!

It's also been said that some kids know things... things they shouldn't know.

Maybe because they haven't been jaded by the world yet they are more in tune with the spiritual realm. Whatever it is, it's terrifying, and when I have kids, I super hope they scare the pants off of me with their ghostly knowledge.

Twitter pot-stirrer Mikki Kendall asked the Internet to share the creepiest, weirdest things kids have said to them.

Why not creep yourself out? she asked while including possibly the most unsettling GIF of all time. Thanks, Mikki. The Internet delivered with more than 1,000 responses, and I'm going to share the best/worst ones with you because I cannot be alone with my terror anymore.

Thinking about it, it is kind of messed up that we say, "I'm going to eat you up!" as a sign of affection. That's some cuteness aggression right there. But we never get more specific about how we're going to eat you up. That's when it gets creepy.

They Come at Night

Well, this is the cold open of the scariest movie to hit theaters in years. There could be so many explanations for what this kid said. Maybe it's dreams. Maybe he's talking about how his dreams take him — Nah, I can't. He's super talking about aliens.

The Man in the Red Jacket

OK here's the thing — I love ghosts. And I want to be able to see and communicate them. What I do not want is for a two-year-old child in a cemetery to point to a ghost that I cannot see and say, "He's coming over to talk." No. Thanks.

What what WHAT. The kid gave driving directions to an abandoned blue house where his "other" grandparents lived. Cool. Not creepy at all.

Some kids don't even need words to be super creepy. This same person followed up this tweet with another, "Same girl a year later, watching her climbing a little tree in the yard, falls out. She stands up, arm dangling at unnatural angle. Not a word, not a tear. Freakiest thing I've ever seen."

It's one thing when a child you're related to says something super weird to you, but a total stranger's kid? At Six Flags? Nuh-uh.

Kids often have the chance to take back their creepy comment before they make it worse, but more often than not, they just double down and make it even more horrifying.

A lot of times, kids repeat stuff they hear on TV or out in the world without really knowing what that stuff means. Or this kid is communicating on a spiritual level with the forest and is about to kill something. Those are the two options here.

Isn't it just so adorable when your kid is used as a vessel for the ghost of a centuries-dead British boy ghost? Just what every mother dreams about.