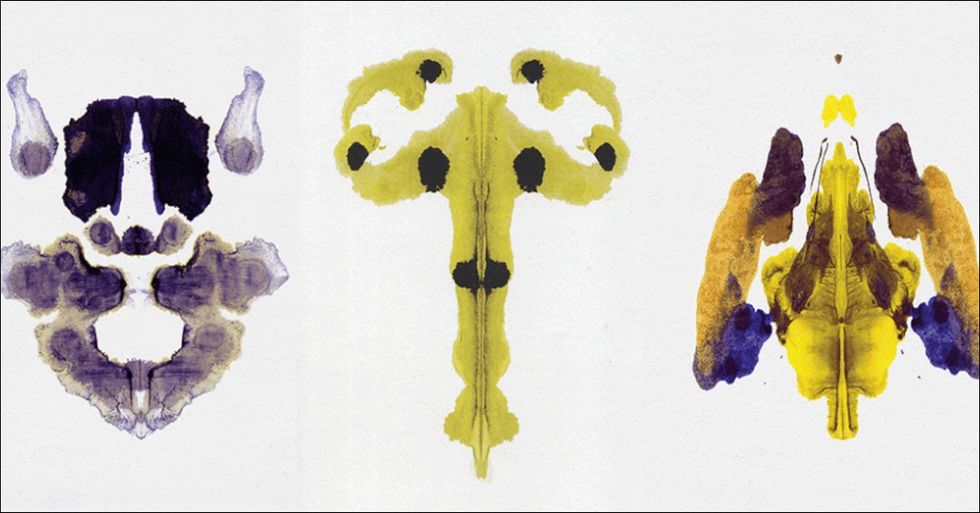 I'll be honest and say that most of the time I think tests like this are pretty full of crap. How can what I see in a picture say anything about my personality other than that statement makes me sound cynical and highly suspicious?

But I took the time (research for the job, of course) to look at these pictures from Psychobook — a recently-released coffee table book filled with psychological games, tests, and questionnaires — and it was kind of spot-on.

So now it's your turn to prove them wrong. Look at each of the images and then scroll down to find out what it means.

If you see... A roast chicken: You may have a few doubts about what you're doing, but overall, you feel very centered and clear about what you need. A screaming cartoon cat: You're a problem solver and you like for your voice to be heard. You thrive on negotiation and conflict, and you may come off as abrasive sometimes. A faceless woman, a judge, or a person in a wig: You've got no time for patience. You set high standards for yourself and expect others to do the same. A woman who has clubbed her husband to death: You're not interested in a Sunday morning, easy going kind of love. You want some sparks to fly (so you can kiss and make up later). Someone's jaws being approached by a pair of forceps: You're all about being true to yourself, and if people don't like it, well, that's their problem. A rocket or a tower: You're a hard worker and highly respected, professionally, but you may need to lighten up a bit in your private life.

If you see... A strong man flexing: You're highly capable and competitive. The bar is set high for you, but you're always up for a challenge. A pair of rams butting heads: You're self-disciplined and reliable. You know what you're doing, which inspires clients and colleagues, but you're also a very nervous, stressed person. Don't worry — only those close to you can tell. A scorpion: You're very in tune with yourself, but you can be thrown off by small changes in diet or sleep because you're physically very sensitive. A lobster or shrimp: You're romantic, but guarded. You're not sure if you want to sacrifice your peace of mind for the unpredictability of a relationship. Fallopian tubes: You're at a standstill right now — privately or professionally. Reality often falls short of your expectations and your achievements don't seem like enough.

If you see... Two figures leaning forward, possibly in prayer: You're a patient and cerebral person. If you care about something, you don't settle for anything less than the best. A racing car or two furry cubs, babies, or devils: You've got a great imagination. You're instinctively metaphorical and can easily see things from other people's points of view. A dentist's or barber's chair: You're sensitive and generous, and you take things painfully to heart. Your transparent with your feelings, and prefer simple, laid-back environments. A woman lying down with her legs open: You're easily distracted. You crave balance in your life and you pay special attention to physical sensations. Two dark forces about to invade a figure: You're constantly starting something and leaving it unfinished. Everything's a "work in progress."

If you see... A beetle or scarab: Success comes naturally to you. You're hardworking and you know how to handle almost any situation. You set plans and follow them through. A pair of emus facing each other while wearing feather boas: You love glamour and the high life. You know all the hottest spots in town, but you've got a few inner struggles going on. Two pairs of hummingbirds, wings beating: You love beautiful things and you're constantly on the move, searching for them. Sunglasses, a bra, or a beard: You're a bit materialistic. You like to dress up, but you often seek external solutions (a new car or some new clothes) to internal problems. A skeleton or bones: You feel like you're on a merry-go-round; like life is always repeating itself. You're worried that it'll all come to a grinding halt and you think you need to take more emotional risks. A flying figure, an alien with stubby feet, or a bikini-wearing woman: You're highly dependable in a crunch, but you can also be flighty on a day-to-day basis. You like getting in touch with friends you haven't talked to for a while.

If you see... Springtime pansies or a bird of paradise: You're charming and thoughtful, but modest. You love discussions and generally like people and what you can learn from them. Pressed flowers: You were the object of a lot of attention as a child, and you may have overly high expectations of yourself. A moth, butterfly, or dragonfly: You're a very independent person. You're drawn to the limelight, but you know it comes at a cost. You can't stand being told what to do. Eyes in darkness with blinkers on: You live inside your own head and think things over exhaustively.